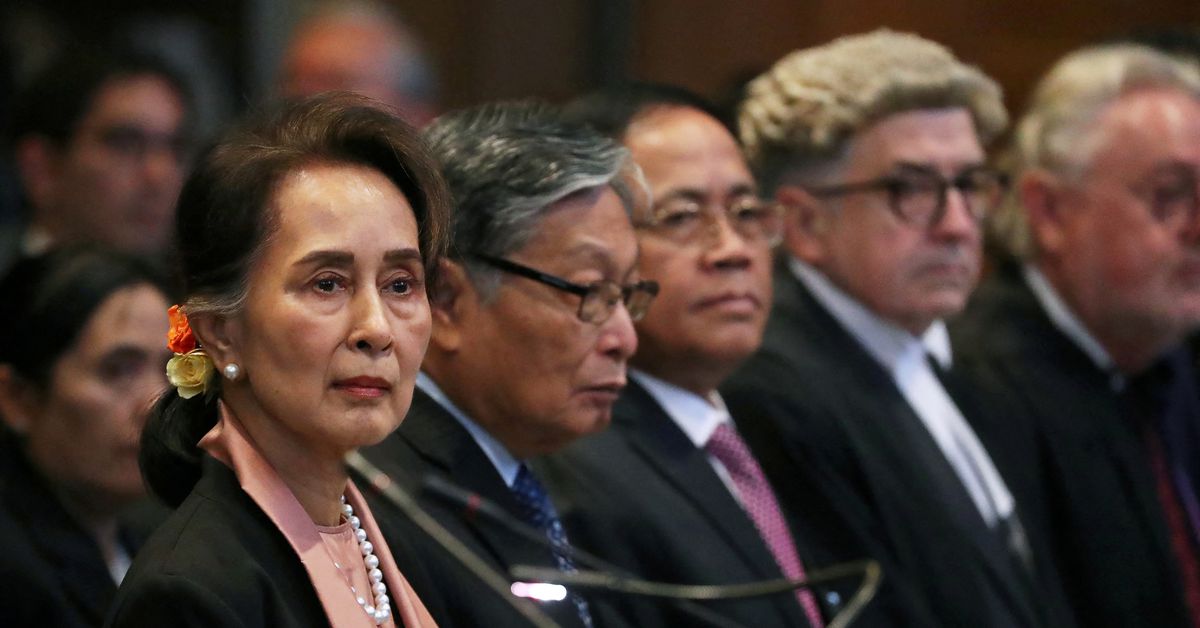 Myanmar’s leader Aung San Suu Kyi attends a hearing in a case filed by Gambia against Myanmar alleging genocide against the minority Muslim Rohingya population, at the International Court of Justice (ICJ) in The Hague, Netherlands December 10, 2019. REUTERS/Yves Herman

DAKAR/THE HAGUE, Jan 14 (Reuters) – Representatives of Myanmar’s junta are expected to challenge the jurisdiction of the World Court to hear allegations the country committed genocide against its Rohingya minority in a fresh round of hearings from Feb. 21, the attorney general of Gambia, which brought the case, told Reuters on Friday.

“A hybrid hearing (is) set to commence on the 21st of February, 2022,” Gambian Attorney General Dawda Jallow said. He added that Aung San Suu Kyi, who led Myanmar’s defence at the first public hearings in 2019 but has since been deposed by the military, had been formally replaced as its top representative in the case.

A hybrid hearing is a procedure where some of the participants are present in person and others participate online due to COVID-19 measures.

More than 730,000 Rohingya fled Myanmar after a military-led crackdown in 2017, and were forced into squalid camps across the border in Bangladesh. U.N. investigators concluded that the military campaign had been executed with “genocidal intent”.

An ICJ spokesperson declined to confirm dates for a new hearing had been scheduled.

She was deposed in a 2021 coup and has since been sentenced to six years in detention and faces a slew of further charges. The army takeover of the democratically elected government led to widespread protests. L1N2TQ09N read more

The military government has been fighting for international recognition and could be eager for the opportunity to show themselves as Myanmar’s legitimate representatives at the U.N.’s top court.

Sources close to the case say the junta has been engaging with the court to submit court-ordered reports every six months on the situation with the Rohingya. The reports are not public.

The next step in ICJ proceedings is Myanmar’s challenge to the jurisdiction of the court. The question if genocide was committed in Myanmar will be dealt with in later hearings.

Reporting by Aaron Ross in Dakar and Stephanie van den Berg in The Hague; Editing by Toby Chopra and Alex Richardson