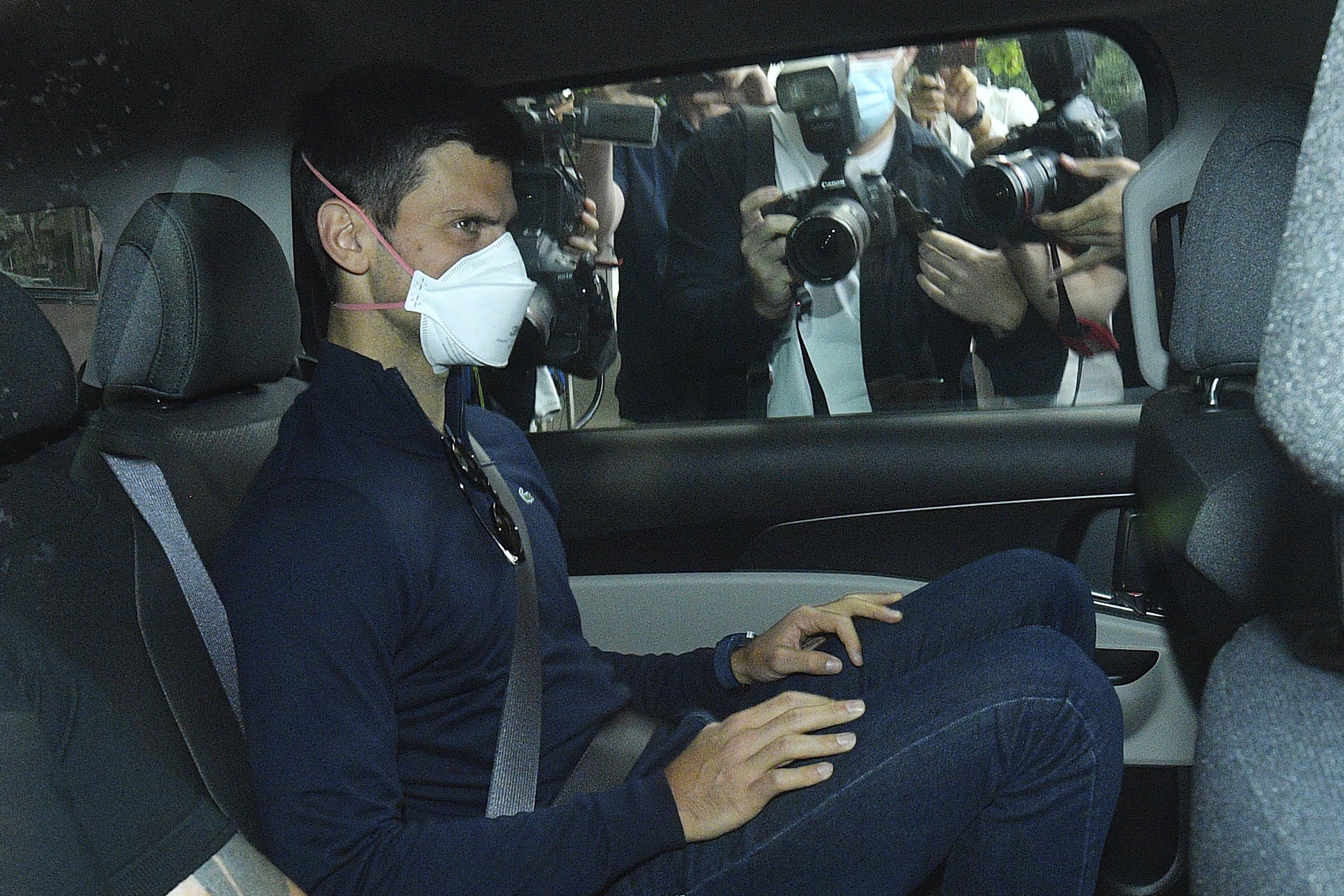 MELBOURNE, Australia (AP) — Novak Djokovic said he was disappointed that a court on Sunday dismissed his challenge to a deportation order and accepted his hopes of playing at the Australian Open were dashed.

The top-ranked tennis star released a statement shortly after three Federal Court judges unanimously upheld a decision made on Friday by Immigration Minister Alex Hawke to cancel the 34-year-old Serb’s visa on public interest grounds because he is not vaccinated for COVID-19.

“I am extremely disappointed with the Court ruling to dismiss my application for judicial review of the Minister’s decision to cancel my visa, which means I cannot stay in Australia and participate in the Australian Open,” Djokovic said.

“I respect the Court’s ruling and I will cooperate with the relevant authorities in relation to my departure from the country,” he added.

Djokovic said he was “uncomfortable” that the focus had been on him since his visa was first canceled on arrival at Mebourne’s airport on Jan. 6.

“I hope that we can all now focus on the game and tournament I love,” he said.

The decision likely means that Djokovic will remain in detention in Melbourne until he is deported.

The national federation that runs the tournament, Tennis Australia, said it respects the decision of the Federal Court. “We look forward to a competitive and exciting Australian Open 2022 and wish all players the best of luck,” it said in a statement.

Deportation usually occurs as soon as possible after an order unless prevented by court action. The government has not said when Djokovic will leave. A deportation order also usually includes a three-year ban on returning to Australia.

In Serbia, President Aleksandar Vucic said the hearing was “a farce with a lot of lies.”

“They think that they humiliated Djokovic with this 10-day harassment, and they actually humiliated themselves. If you said that the one who was not vaccinated has no right to enter, Novak would not come or would be vaccinated,” Vucic told reporters.

He said he told Djokovic after talking to him “that we can’t wait to see him in Serbia, to return to his country, to come where he is always welcome.”

He did not say whether Djokovic said he would first go to Serbia after his deportation.

Chief Justice James Allsop said the ruling came down to whether the minister’s decision was “irrational or legally unreasonable.”

Hawke welcomed the decision. His office did not immediately provide detail of how or when Djokovic would leave.

“Australia’s strong border protection policies have kept us safe during the pandemic, resulting in one of the lowest death rates, strongest economic recoveries, and highest vaccination rates in the world,” Hawke said.

“Strong border protection policies are also fundamental to safe-guarding Australia’s social cohesion which continues to strengthen despite the pandemic,” he added.

Prime Minister Scott Morrison welcomed what he described as the “decision to keep our borders strong and keep Australians safe.”

But opposition spokesperson on the home affairs portfolio, Kristina Keneally, said Djokovic was being deported for what he said and did publicly overseas before the government gave him a visa in November.

“This mess isn’t a failure of our laws. It’s a failure of Morrison’s competence & leadership,” Keneally tweeted.

The pandemic response has become politically charged with Morrison’s conservative coalition seeking a fourth three-year term at elections due by May.

Infection rates have soared across much of Australian since December when Morrison’s government relaxed what had been some of the democratic world’s toughest restrictions on international travel.

Djokovic could potentially appeal to the High Court, but not in time for him to compete in the Australian tournament.

“I will now be taking some time to rest and to recuperate, before making any further comments beyond this,” he said.

The court process that Djokovic had hoped would keep his aspirations alive for a 21st Grand Slam title was extraordinarily fast by Australian standards.

Within three hours of Hawke’s announcement on Friday afternoon that Djokovic’s visa was canceled, his lawyers went before a Federal Circuit and Family Court judge to initiate their challenge to the decision. The case was elevated to the Federal Court on Saturday and submissions were filed by both sides that same day.

The three judges heard the case over five hours on Sunday and announced their verdict two hours later.

There was evidence that Djokovic was to be deported based on Hawke’s assessment that he was considered a “talisman of a community of anti-vaccination sentiment.”

Lloyd raised the example of Djokovic giving a French newspaper journalist an interview last month while he was infected with COVID-19 and taking off his mask during a photo shoot. Djokovic has acknowledged the interview was an error of judgment.

The minister canceled the visa on the grounds that Djokovic’s presence in Australia may be a risk to the health and “good order” of the Australian public and “may be counterproductive to efforts at vaccination by others in Australia.”

Djokovic’s visa was initially canceled on Jan. 6 by a border official who decided he didn’t qualify for a medical exemption from Australia’s rules for unvaccinated visitors. He was exempted from the tournament’s vaccine rules because he had been infected with the virus within the previous six months.

Vasek Pospisil, a Canadian who won the 2014 Wimbledon men’s doubles title and has worked with Djokovic to form an association to represent players, tweeted: “There was a political agenda at play here with the (Australian) elections coming up which couldn’t be more obvious. This is not his fault. He did not force his way into the country and did not ‘make his own rules’; he was ready to stay home.”

Pospisil wrote that Djokovic wouldn’t have tried to go to Australia at all and “been home with his family” had he not received the medical exemption.

Djokovic has won nine Australian Open titles, including three in a row, and a total of 20 Grand Slam singles trophies, tied with rivals Roger Federer and Rafael Nadal for the most in the history of men’s tennis.

Djokovic’s dominance of late has been particularly impressive, winning four of the last seven major tournaments and finishing as the runner-up at two others.

The only time he did not get at least to the final in that span was at the 2020 U.S. Open, where he was disqualified in the fourth round for hitting a ball that inadvertently hit a line judge in the throat after a game.

Because Djokovic has withdrawn from the tournament after Monday’s schedule was released, he has been replaced in the field by what’s known as a “lucky loser” — a player who loses in the qualifying tournament but gets into the main draw because of another player’s exit before competition has started.

That player is Italian Salvatore Caruso, who is ranked 150th in the world.