Israeli police evicted a Palestinian family and demolished their home in the flashpoint East Jerusalem neighborhood of Sheikh Jarrah before dawn on Wednesday, arresting 18 Palestinians and Israeli activists at the scene.

The Jerusalem city hall said it plans to build a special needs school for the neighborhood’s Palestinian residents on the plot, as well as six kindergartens.

It was the first eviction in Sheikh Jarrah since 2017. Eviction battles in the neighborhood in May were a major factor in rising tensions that touched off a brief war between Israel and Hamas terrorists, who threatened violence should Palestinians be removed from their homes.

The eviction plan sparked bitter condemnation by Palestinians, European diplomats and left-wing Israeli parliamentarians. Palestinians see the eviction as a part of a larger attempt by Israel to erase their presence in East Jerusalem.

“As thieves in the night, officers arrived to evict the Salihiya family into the freezing street. These are the lives of Palestinians in East Jerusalem,” said Meretz parliamentarian Mossi Raz immediately following the eviction on Wednesday morning.

In 2017, the Jerusalem municipality announced that it would expropriate the property to build a school, sparking a legal battle with the Salihiya family. Last year, a Jerusalem court ruled in favor of the city, although the family has continued to contest the eviction.

When police first arrived on Monday, the Salihiya family barricaded themselves inside their home. Police bulldozed a plant nursery belonging to the family on the plot, while they negotiated with the residents over their home. 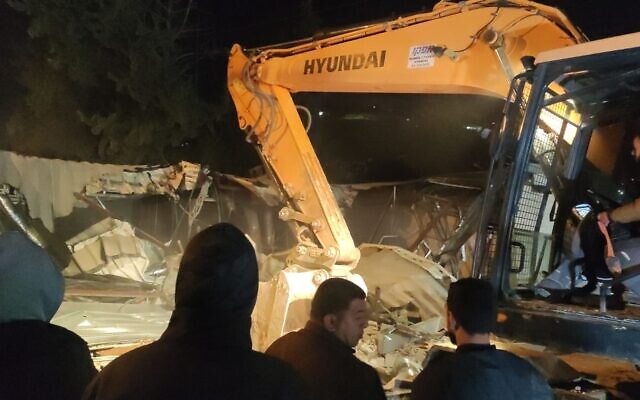 Municipal bulldozers demolish a structure on a plot formerly occupied by the Salihiya family in Sheikh Jarrah, East Jerusalem, on Wednesday, January 19, 2022 (courtesy)

Family patriarch Mahmoud Salihiya, standing next to a canister of fuel on the roof, threatened to burn himself alive, taking his house with him, rather than be evicted.

“We won’t leave. We’ll either live or die. I’ll burn myself with fuel,” Salihiya said in a video that circulated on social media. Police retreated later that day, but the two sides did not come to a final agreement.

The standoff ended when dozens of police officers raided the Salihiya family home at around 3 a.m. on Wednesday.

The journalists and European diplomats who had gathered around the home when the bulldozers first arrived on Monday were absent. The temperatures dropped below zero degrees Celsius and freezing rain fell over the neighborhood.

Eighteen Palestinians and Israelis were arrested at the scene. Left-wing activists identified the detainees as at least five Israelis and as most of the Salihiya family.

“Some were arrested for interrogation on suspicion of violating a court order, ‘violent entrenchment,’ and violating public order,” police said in a joint statement with Jerusalem city hall.

In videos from the scene, a bulldozer was filmed demolishing the house. “The eviction of the structure and the land was completed,” police announced later in the morning. 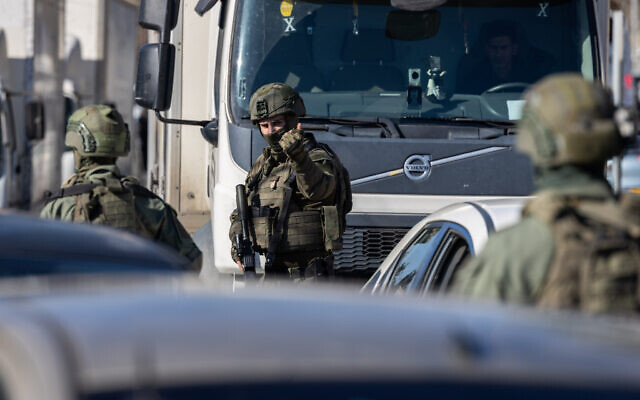 Israeli special forces seen during the evacuation of a house in the East Jerusalem neighborhood of Sheikh Jarrah, January 17, 2022. (Yonatan Sindel/Flash90)

Sheikh Jarrah, parts of which were historically known in Hebrew as Shimon Hatzadik or Nahalat Shimon, has become one of Jerusalem’s most tense neighborhoods. Palestinians live alongside a small cluster of right-wing Jewish nationalists who moved in following complex eviction cases.

According to the left-wing Ir Amim nonprofit, some 300 Palestinians are currently under threat of eviction in Sheikh Jarrah, mostly in private cases filed by right-wing Jewish groups.

In the case of the Salihiya family, however, the land was confiscated by the Jerusalem municipality rather than being claimed by individual Jewish residents. The city says their home was built illegally on public land.

“Despite the fact that the plan was approved and budgeted years ago, its implementation is severely delayed due to the takeover of the land by foreign parties,” the Jerusalem municipality said in a statement, referring to the Salihiya family.

Jerusalem has around 350,000 Palestinian residents, who constitute around 38 percent of the city’s population. But the municipality provides their neighborhoods with far fewer public services: Schools are overcrowded, garbage piles up, and streets are in noticeable disrepair.

East Jerusalem Palestinians can vote in city elections, but most choose to boycott, leaving them with no representatives in city hall. The city’s planning committee is headed by ultra-Orthodox representative Eliezer Rauchberg.

Left-wing activists argue that the city could have chosen to build a Palestinian school without evicting the Salihiya family.  A large public plot of around four dunams had until recently been present for public use just around the corner.

But it was allocated for an ultra-Orthodox religious school, even though the neighborhood is mostly Palestinian, according toAviv Tatarsky, a researcher at Ir Amim.