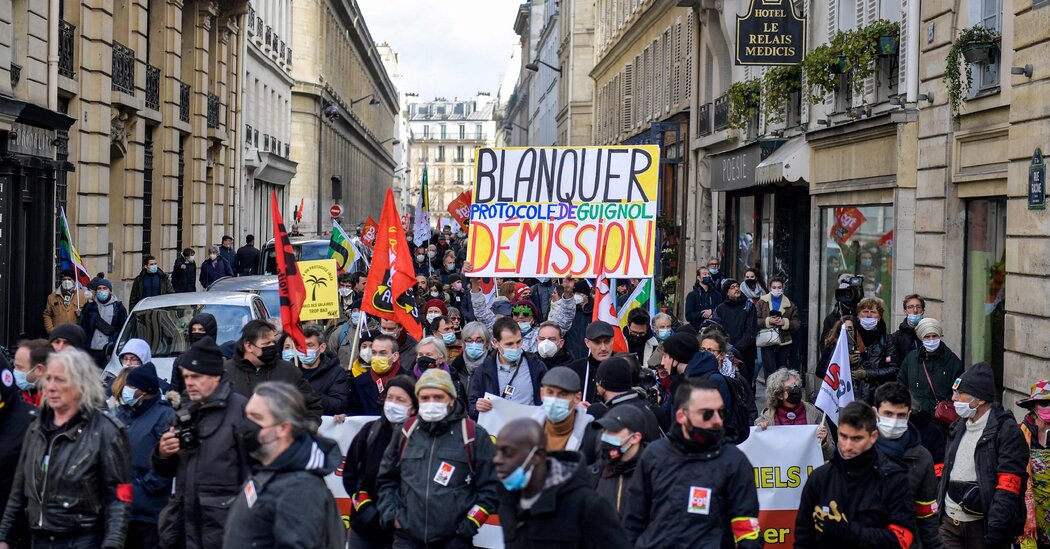 The French government set a timeline on Thursday to lift the country’s Covid-19 restrictions over the next few weeks, as pandemic indicators in France show tentative signs of improvement and a presidential election looms in April.

Jean Castex, the French prime minister, said at a news conference that there was a “clear ebbing” of the wave of coronavirus cases attributable to the Delta variant, as well as preliminary indications that another surge of cases linked to the Omicron variant was slowing down in the areas where it struck first, like the region around Paris.

“This exceptional wave is not over, but the situation is starting to evolve more favorably,” Mr. Castex said.

France has averaged more than 300,000 new cases a day over the past week, and reported 525,000 cases on Monday, the most known cases in a single day since the pandemic began. There are more than 27,000 Covid-19 patients in hospitals around the country, but the number in intensive care units has declined in the past few days, from a peak of nearly 4,000 patients last week.

Mr. Castex announced that the easing of restrictions in February would be done in stages. First to go will be outdoor mask mandates, capacity limits in public establishments and mandatory work-from-home rules for some companies, he said.

By the middle of February, when the government said it expected the Omicron surge to peak, night clubs will be allowed to reopen and people will once again be allowed to eat and drink in settings like movie theaters and stadiums.

“We must be confident, while remaining vigilant,” Mr. Castex said.

Starting Monday, he said, France will begin enforcing a rule barring most people who do not show proof of full vaccination or recent recovery from Covid from entering public establishments like bars, restaurants and museums. The government has not said specifically when that restriction would end, only that officials would wait to consider doing so until after the pressure on hospitals has lessened significantly.

“We will apply the vaccine pass as long as necessary, but no longer than necessary,” Olivier Véran, the French health minister, said at the news conference.

In a report published this week, the scientific council that advises the French government on Covid-19 was cautious, saying that the Omicron surge was not over and that “its impact on the health system will remain high, but partly manageable, until mid-March.”

The council warned that social distancing rules would remain paramount, and it urged the authorities to put more resources into detecting cases in schools, where there is “very active circulation” of the virus. The government has taken pride in keeping schools open despite the surge.

Teachers and school employees across France staged protests on Thursday over what they say is a lack of equipment needed to keep classrooms safe, like air-quality monitors and highly protective masks. The protests were notably smaller than the large walkouts by teachers’ unions last week over the same issue.

After last week’s demonstrations, the government promised to distribute five million FFP2 masks — the European equivalent of N95 — and to hire thousands of substitute teachers.

The teachers’ unions have also been angered by recent revelations that the education minister was vacationing on the Mediterranean island of Ibiza while a contested new testing protocol for schools was taking shape.