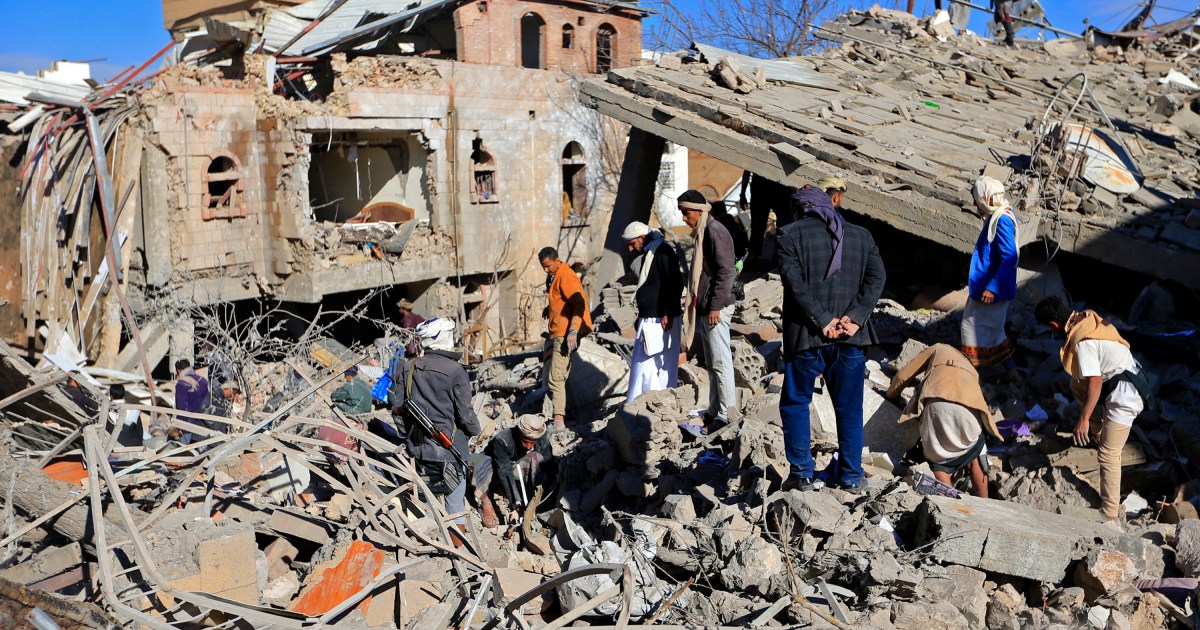 The UAE vowed a tough response and, on Tuesday, local media and Sanaa residents said at least 20 people, including civilians, were killed in overnight coalition air raids, the heaviest in years.

The Houthis’ Saba news agency reported that the head of the group’s aviation academy Abdullah Qassim al-Junaid was killed along with his wife, 25-year-old son, family members and other unidentified people.

Later on Tuesday, the coalition launched more air raids on Sanaa, saying it had targeted Houthi warehouses and destroyed a communications system for drones.

(1/2) Amb Nusseibeh: “The UAE calls on the #UNSC to speak with one voice & join in firmly & unequivocally condemning these terrorist attacks, which were launched in complete disregard of international law.”

It came as the UAE’s mission at the United Nations requested a meeting of the Security Council to discuss the “terrorist attacks”.

“The UAE calls on the #UNSC to speak with one voice & join in firmly & unequivocally condemning these terrorist attacks, which were launched in complete disregard of international law,” UAE Ambassador to the UN Lana Nusseibeh said in a Twitter post.

Nusseibeh said Monday’s “illegal and alarming escalation is a further step in the Houthis’ efforts to spread terrorism and chaos in our region”.

In a Twitter post, UN General Assembly President Abdulla Shahid “expressed solidarity with [the UAE] in the face of such terror acts which are against all civilized norms.”

Conveyed my deepest condolences to the people and Govt of 🇦🇪 on the dastardly attack that resulted in the death of innocent civilians.

Expressed solidarity with 🇦🇪 in the face of such terror acts which are against all civilized norms. pic.twitter.com/TOsDwcDZcL

The US special envoy for Yemen will visit Gulf capitals this week to try and reinvigorate the peace process, the US statement department said on Wednesday.

Envoy Tim Lenderking “will press the parties to de-escalate militarily and seize the new year to participate fully in an inclusive UN-led peace process,” it said in a statement. Lenderking will also focus on the “urgent need to mitigate the dire humanitarian and economic crises facing Yemenis”.

The UN chief “expresses his concern and deplores” the coalition air raids that resulted “in numerous civilian casualties”, his spokesman Stephane Dujarric said on Tuesday. “The secretary-general again calls upon all parties to exercise maximum restraint and prevent further escalation and intensification of the conflict.”

The war in Yemen began in 2014 when the Houthi rebels, traditionally confined to the north of the country, swept south, taking over much of the country, including Sanaa, and forcing President Abd-Rabbu Mansour Hadi to flee.

Fighting escalated in March 2015 when Saudi Arabia and the UAE, with US backing, assembled a military coalition in support of Hadi’s government that succeeded in pushing the Houthis out of southern areas.

Monday’s attack opened a new front in the seven-year war as the UAE has largely avoided the Houthi firing line, with Saudi Arabia bearing the brunt of missile and drone attacks sent from Yemen. It also followed a surge in fighting in Yemen, including battles between the Houthis and UAE-trained troops.

The Giants Brigades, a pro-government force of mostly southern Yemenis that was fighting on the Red Sea coast, moved east to Shabwah in late December and forced the Houthis out of the governorate in less than two weeks. They, along with official Yemeni government forces, are now pushing into Houthi territory in neighbouring al-Bayda and Marib governorates.

The flare-up has raised fears of a worsening humanitarian crisis in Yemen where the situation is already dire, with more than 16 million people being food insecure.

Though exact figures are difficult to gather, the UN estimates that more than 377,000 people have died due to the conflict as of late 2021.