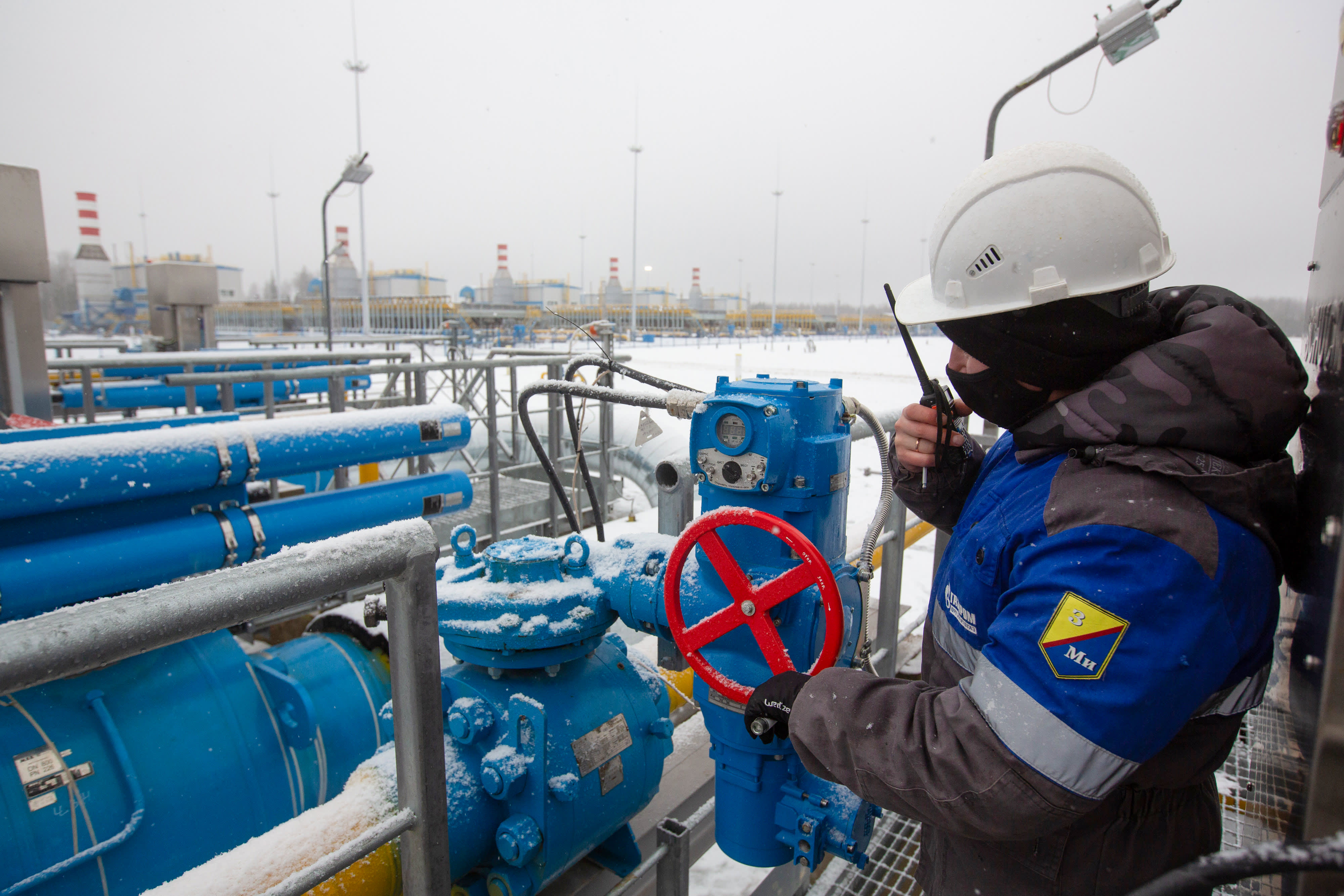 A worker adjusts a pipeline valve at the Gazprom PJSC Slavyanskaya compressor station, the starting point of the Nord Stream 2 gas pipeline, in Ust-Luga, Russia, on Thursday, Jan. 28, 2021. Nord Stream 2 is a 1,230-kilometer (764-mile) gas pipeline that will double the capacity of the existing undersea route from Russian fields to Europe — the original Nord Stream — which opened in 2011.

Escalating tensions between Russia, Ukraine and the West have heightened concern about the future of Russian gas flows to the European Union, with lawmakers and energy providers scrambling to prepare contingency plans.

It comes as President Joe Biden warns there is a “distinct possibility” Russia could invade Ukraine as soon as next month and as the Kremlin says there is “little ground for optimism” after the U.S. rejected its main demands to resolve the crisis.

Russia has amassed an estimated 100,000 troops near the border of Ukraine but denies planning to enter the former Soviet republic.

“European natural gas supplies are well below their typical norms and inventories, so a key question to ask is if Europe has enough natural gas inventory to survive,” Rob Thummel, senior portfolio manager at energy investment firm TortoiseEcofin, said in a research note.

“Given that there’s a lot of winter left, I think there are scenarios where it could become really challenging, and inventories could go really low. Europe needs Russia from an energy standpoint, and energy is so essential that it’s going to be very difficult to just cut off supplies for both sides,” he added.

For several months, Russia has been accused of intentionally disrupting gas supplies to leverage its role as a major energy supplier to Europe amid an escalating dispute with Ukraine.

Russian gas flows to Europe have been lower than typically expected for a sustained period, with political analysts suggesting that Moscow has purposefully withheld supplies in a bid to speed up certification of the highly contentious Nord Stream 2 pipeline.

Indeed, Russia’s purported role in exacerbating Europe’s energy crunch was even the subject of a rare public rebuke from the International Energy Agency, with the group calling on Russia to increase gas availability to Europe and ensure storage levels were filled to adequate levels during a period of high winter demand.

The Kremlin has repeatedly disputed claims it is using gas as a geopolitical weapon, with state-owned Gazprom saying it has fulfilled its contractual obligations to customers.

Now, as Russia-Ukraine tensions reach a fever pitch, energy analysts are deeply concerned about the risk of full supply disruption to the EU — which receives roughly 40% of its gas via Russian pipelines and several of which run through Ukraine.

What can Europe do if gas flows are disrupted?

The prospect of a supply cut-off of Russian gas is seen as likely to result in profound public health and economic consequences, particularly as such a scenario could come in the middle of winter and amid the coronavirus pandemic.

Energy analysts at political risk consultancy Eurasia Group believe the worst-case scenario of Russia abruptly cutting off all supplies to Europe is also the least likely scenario. This is partly because such a move would have major financial costs for Moscow, while simultaneously triggering a coordinated effort by EU states to permanently reduce gas imports from Russia.

“Even if a full disruption of Russian gas exports to the EU remains unlikely, officials and energy providers there have been making contingency plans,” analysts at Eurasia Group said.

For example, European utilities have increased orders of shipped liquefied natural gas cargoes over the Christmas and New Year period, chiefly from the U.S. and Qatar, which have around 100 cargoes scheduled to arrive in Europe in January alone. Eurasia Group said, citing ship tracking data, that this reflected an increase of roughly 40% from the previous record in March 2021.

View of pipe systems and shut-off devices at the gas receiving station of the Nord Stream 2 Baltic Sea pipeline.

These inflows of natural gas supplies, while costly, are likely to “significantly” help the western European and Mediterranean regions, but it is not thought to be as helpful for landlocked regions of central and eastern Europe.

In the event of a total shutdown of Russian gas supply to the EU, analysts at Eurasia Group said the incoming fleet of LNG would be “insufficient” to meet Europe’s gas demand, with gas prices seen spiking “to unprecedented levels” in this scenario.

Beyond ordering as many LNG cargoes as possible, Eurasia Group analysts said Europe’s options to mitigate a full supply disruption would consist of asking alternative pipelines such as Algeria, Azerbaijan and Norway to maximize pipeline pressure, a total blowdown of all available gas inventories across the EU, activating any alternative power and heating supplies available and, if necessary, ordering demand curtailments.

What is perhaps more likely as tensions escalate is a partial disruption of Russian gas flows to the EU via Ukraine.

“This would still cause significant economic harm and possibly lead to some localised heating and power shortages, especially in southeast Europe, which already suffered similar disruptions during a Russian cut-off of gas supply through Ukraine in 2008/2009,” analysts at Eurasia Group said.

“If this happened, Moscow would likely try to shield its biggest customers, Germany and Italy, from the worst impact,” they added, noting U.S. or EU sanctions would probably steer clear of targeting Russia’s remaining gas exports to Europe as this would cause too much harm.

“Gazprom has supplied the European Union and its customers in the European Union with long-term contracts consistently over decades regardless of the state of relations between the West and Russia and/or the Soviet Union,” he added.

“And continuing to supply its core customers principally in places such as Germany and Italy and to a lesser extent place such as France and Austria will be extremely important for Russia.”

Marzec-Manser said a scenario in which Russia was unable but willing to deliver gas to European customers — due to economic sanctions or if it is deemed unsafe to deliver piped gas through Ukraine — it would not necessarily result in an abrupt cut-off to supplies.

“There is certainly re-routable capacity on other routes to market,” Marzec-Manser said, noting volumes that currently transit through Ukraine could be re-routed through Poland instead.

The front-month gas price at the Dutch TTF hub, a European benchmark for natural gas trading, traded up around 0.5% at 92.8 euros ($103.3) per megawatt-hour on Friday morning, according to New York’s Intercontinental Exchange.

The TTF-month ahead index has fallen from a peak of 113 euros in December but remains at elevated levels, partly due to persistent concerns over Russia and escalating tensions with Ukraine.

Sorgente articolo:
What if Russia turns off the gas? Europe assesses its options as fears mount over Ukraine crisis – CNBC