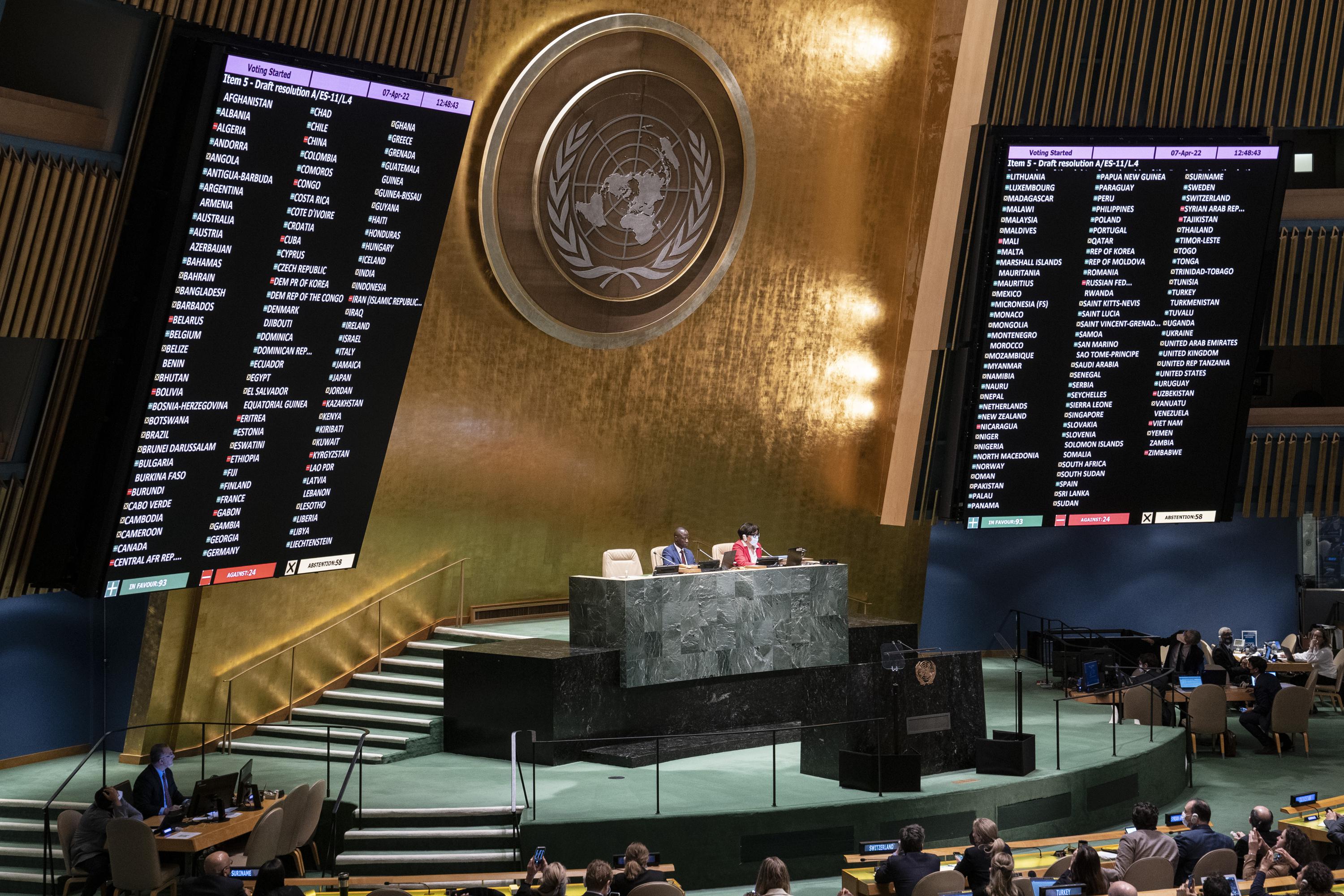 UNITED NATIONS (AP) — The U.N. General Assembly took a first step Tuesday to put the five permanent members of the Security Council under the spotlight whenever they use their veto power, a move highlighted by Russia’s veto threat paralyzing any action by the U.N.’s most powerful body on the Ukraine war.

A resolution adopted by consensus in the 193-member assembly amid a burst of applause does not eliminate or limit the veto power of the Security Council’s permanent members —- the United States, Russia, China, Britain and France.

But for the first time, the General Assembly will be required “to hold a debate on the situation” that sparks a veto in the Security Council within 10 working days. Precedence will be given on the list of speakers to the permanent member who casts a veto.

The assembly isn’t required to take or consider any action under the resolution, but the discussion could put veto-wielders on the spot and let a raft of other countries be heard.

Liechtenstein’s U.N. ambassador, Christian Wenaweser, who spearheaded the resolution, which had been in the works for two years, has said it aims “to promote the voice of all of us who are not veto-holders, and who are not on the Security Council, on matters of international peace and security because they affect all of us.”

Amnesty International’s secretary general, Agnes Callamard, called the resolution “a first step towards increasing the cost of using the veto — and it could not have come soon enough.”

The resolution had about 80 co-sponsors, including the United States and the United Kingdom. But it also had detractors even though they didn’t break consensus, including Russia and close ally Belarus as well as current elected council members Gabon and India and other U.N. member nations.

The reform of the Security Council, which is charged under the U.N. Charter with ensuring international peace and security, has been debated for more than 40 years, and was front and center in comments by countries before and after the resolution’s adoption.

There is widespread support for revamping the council to reflect current global realities rather than the international power structure after World War II in 1945 when the United Nations was created. But rivalries between countries and regions have blocked all attempts to reach agreement on the size, composition and powers of an expanded council.

The veto power of the five permanent members is one component on the reform agenda.

More than 200 different Security Council proposals have been vetoed, some by multiple countries, according to U.N. records. The subjects have ranged from the Korean War and the Israeli-Palestinian conflict to climate change, reporting on weapons stockpiles, and governance of a part of the Indian Ocean nation Comoros.

The former Soviet Union and its successor Russia have cast the most vetoes by far, followed by the United States. Far fewer have been cast by Britain, China and France.

U.S. deputy ambassador Richard Mills said after the vote that the United States is “extraordinarily troubled by Russia’s pattern of abusing its veto right over the past decade,” citing resolutions it vetoed ranging from referring Syria to the International Criminal Court, protesting Russia’s annexation of Ukraine’s Crimea peninsula and demanding Russia immediately halt its invasion of Ukraine.

British Ambassador Barbara Woodward, whose country has not used its veto since 1989, called the resolution “a step in pursuit of upholding international peace and security,” adding: “We prefer to win votes rather than use our veto to block council action.”

France didn’t co-sponsor the resolution and its deputy ambassador, Nathalie Broadhurst, said it does not believe the General Assembly can become the judge of the Security Council.

She said that is why France and Mexico have been promoting an initiative on the veto for several years. It would require the five permanent council members to voluntarily and collectively suspend the use of the veto in the event of mass atrocities. Saying the proposal is supported by 105 countries, she urged “all states, in particular the other four permanent members, to join it.”

Russia’s deputy ambassador, Gennady Kuzmin, called the veto “a cornerstone of the U.N. architecture” and warned that “without it the Security Council would become a rubber-stamping body, rubber-stamping questionable decisions imposed by the nominal majority whose implementation would be hardly possible.”

Chinese counselor Jiang Hua said the resolution’s automatic triggering of a General Assembly meeting on the vetoed resolution “in practice is likely to cause procedural confusion and inconsistency.”

India and Brazil, which have sought permanent seats on the Security Council for many years and are currently serving two-year terms on the body, both complained that the resolution doesn’t address the real issue of reforming the council.

“A representative council which reflects the current international system is central to the maintenance of international peace and security and to the future of this organization.” Brazilian Ambassador Ronaldo Costa Filho told members.

India’s deputy ambassador, Ravindra Raguttahalli, said that “a vocal minority of nay-sayers” who support the status quo in the Security Council have held reform efforts hostage. He said the veto resolution ignores the root cause of the problem — restruturing the council to reflect “contemporary geo-political realities.”

Ambassador Michel Biang of Gabon, which is also an elected council member, said Africa has the largest number of U.N. peacekeeping missions but has no permanent seat on the Security Council.

Approving the resolution “will not change the scope of the veto, nor its substance,” Biang said.