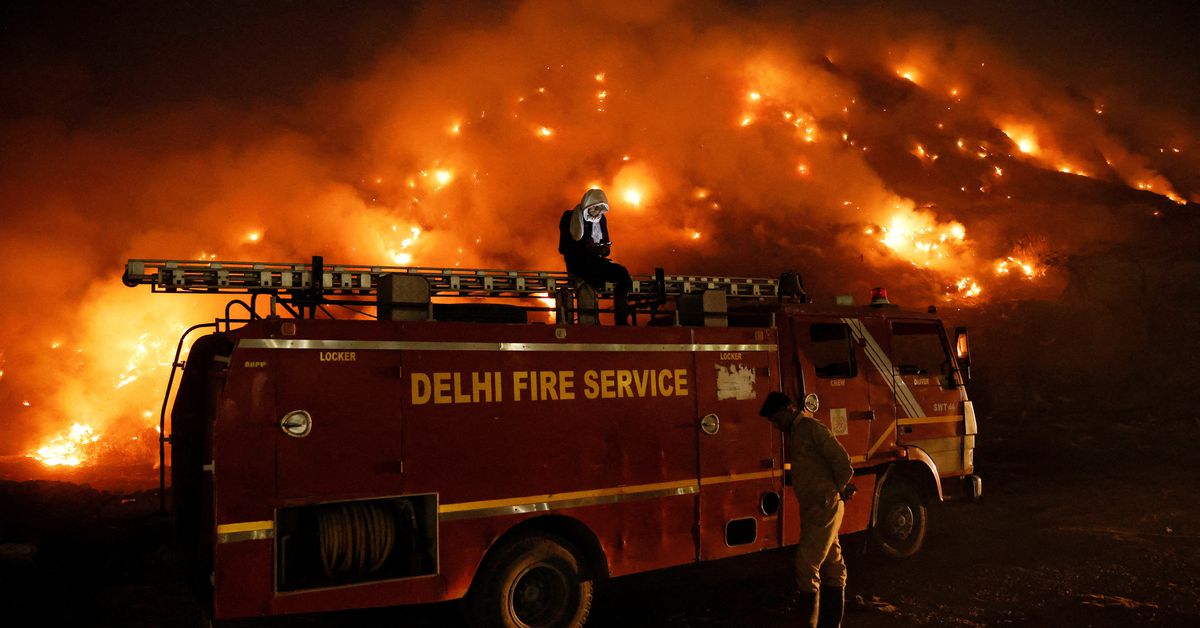 NEW DELHI, April 27 (Reuters) – India is getting too hot too early, raising the risk of fires, Prime Minister Narendra Modi warned on Wednesday, as a heatwave gripped much of the country and a landfill site burned on the capital’s outskirts.

“Temperatures are rising rapidly in the country, and rising much earlier than usual,” Modi told heads of India’s state governments in an online conference.

The extreme heat has swept across large areas of India and Pakistan this week and follows the hottest March since the India Meteorological Department (IMD) began keeping records 122 years ago.

More than a billion people are at risk of heat-related health impacts, scientists said. In the capital New Delhi, temperatures have soared past 40 degrees Celsius (104 Fahrenheit) for several days and are forecast to linger around 44C until Sunday, with peak summer heat still to come before cooling monsoon rains arrive in June.

“We are seeing increasing incidents of fires in various places – in jungles, important buildings and in hospitals – in the past few days,” Modi said.

He asked states to conduct fire-safety audits for hospitals. Dozens of people die every year in fires at Indian hospitals and factories, mainly due to illegal construction and lax safety standards.

Fires in Delhi’s dump yards also contribute to the toxic air in the world’s most polluted capital.

As Modi spoke, firefighters were struggling to extinguish a blaze at the Bhalswa landfill site, a hillock rising above the northwestern edge of the city. Fumes from the burning waste forced a nearby school to close on Tuesday.

The cause of the fire was under investigation.

A firefighter uses his mobile phone as he sits on top of a fire truck as smoke billows from burning garbage at the Bhalswa landfill site in New Delhi, India, April 27, 2022. REUTERS/Adnan Abidi

Among the worst hit have been the typically humid eastern Indian states, which saw temperatures above 43C on Wednesday.

“Rarely it happens that nearly the whole country … is reeling under (a) heatwave,” said hydroclimatologist Arpita Mondal at the Indian Institute of Technology Bombay, on the coast of Maharashtra, where she said the heat was “unbearable”. Mumbai temperatures hit 37C on Wednesday.

Climate change is “beyond doubt” a contributing factor to the weather extremes, Mondal said.

In February, a report by the Intergovernmental Panel on Climate Change warned of India’s vulnerabilities to extreme heat. For example, at 1.5C of warming above pre-industrial temperatures, the West Bengal capital of Kolkata could once a year see conditions match that of the 2015 heatwave, when temperatures hit 44C and thousands died across the country.

Mondal’s research has found that urban pollution may also play a role, with black carbon and dust absorbing sunlight and leading to greater heating in India’s cities.

While heat risks lives and livelihoods in India, the real danger comes when high temperatures mix with high humidity, making it difficult for people to cool down through sweating.

Such conditions are measured by “wet bulb temperatures” which record the reading of a thermometer wrapped in a wet cloth. High wet bulb temperatures are of particular concern in India, where most of the country’s 1.4 billion people live in rural areas without access to air conditioners or cooling stations.

The IMD warned that conditions were likely to get worse in the next four days.