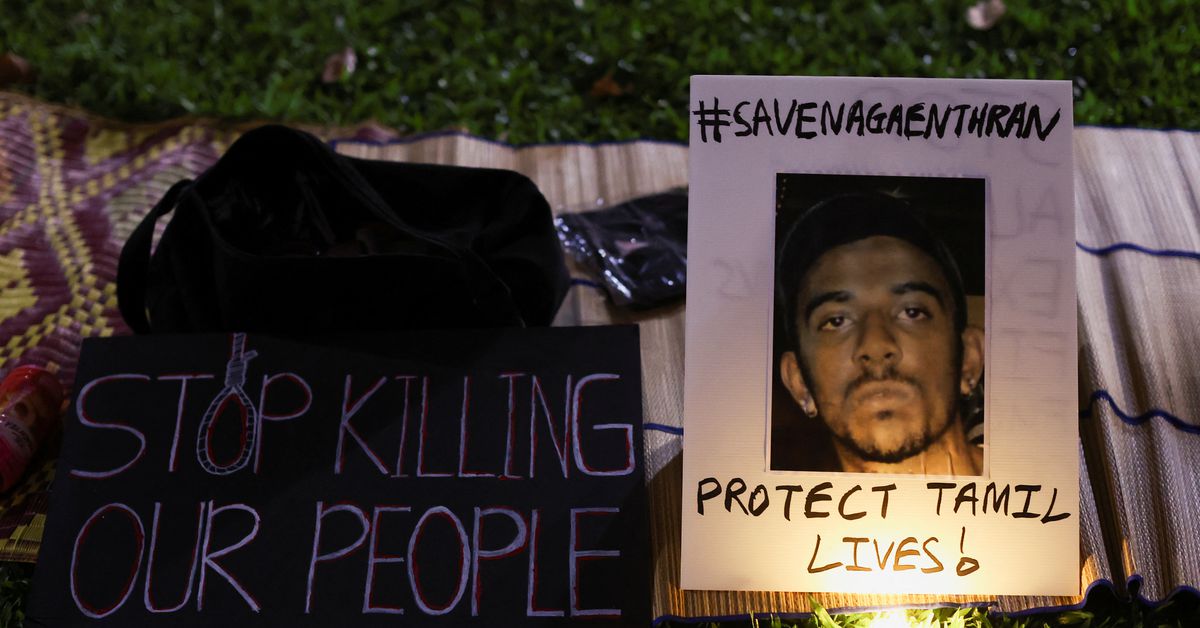 A poster of Nagaenthran Dharmalingam is pictured at a vigil ahead of the planned executions of Malaysians Dharmalingam and Datchinamurthy Kataiah at Hong Lim Park in Singapore April 25, 2022. REUTERS/Edgar Su

SINGAPORE, April 28 (Reuters) – Singapore authorities late on Wednesday defended a decision to execute a Malaysian drug trafficker, in response to international criticism over their use of the death penalty.

Nagaenthran Dharmalingam, 34, had been convicted of smuggling at least 42 grams (1.48 oz) of heroin into Singapore, which has among the world’s harshest narcotics laws. He was hanged on Wednesday morning, after multiple legal challenges and appeals for clemency on the grounds that he had an intellectual disability, failed.

His lawyers and activists have said Nagaenthran’s IQ was found to be 69, a level recognised as an intellectual disability.

But Singapore’s Central Narcotics Bureau said in a statement his actions were “a deliberate, purposeful and calculated decision”, and reiterated court findings that “he knew what he was doing”.

The Attorney General’s Chambers said in a separate statement Nagaenthran was given a fair trial and had “exhausted his rights of appeal and almost every other recourse under the law over some 11 years”.

The European Union and Amnesty International were also among several voices that called the punishment “inhumane” and urged Singapore to impose a moratorium on executions.

The city-state’s government says the death penalty is a deterrent against drug trafficking and most of its citizens support capital punishment.

Another Malaysian drug trafficker, Datchinamurthy Kataiah, is due to be executed on Friday.

Reporting by Chen Lin in Singapore; Editing by Kanupriya Kapoor