“I never thought that this is what would happen again — that at my age I would have to again flee a war and again hear the sounds of bombs going off around me. I already beat Hitler once, I survived the Holocaust. I have a daughter, two grandchildren and three great-grandchildren. And now again I’m a refugee trying to save her life,” said Ninel Zhilinska, 88, one of the survivors on the plane, shortly before leaving for Israel.

Twelve other Holocaust survivors arrived earlier in the day on regular flights, according to the International Fellowship of Christians and Jews, which arranged those flights and many of the others transporting refugees to Israel from Ukraine.

“These elderly people generally did not plan on leaving Ukraine, but their homes are in flames and the next place that will be their home is the State of Israel,” said Benny Haddad, the head of IFCJ’s immigration department.

The 21 survivors who arrived on Wednesday were far from the only ones to reach Israel from Ukraine since Russia invaded their country two months ago. In total, some 500 Holocaust survivors are estimated to be among the more than 15,000 people from Ukraine, Russia and Belarus who have immigrated to Israel over the past two months, according to Immigration and Absorption Ministry statistics.

Russia launched its invasion of neighboring Ukraine on February 24, following months of heightened tensions. The fighting has left thousands dead in Ukraine and displaced millions of people, prompting the largest refugee crisis in Europe since World War II. 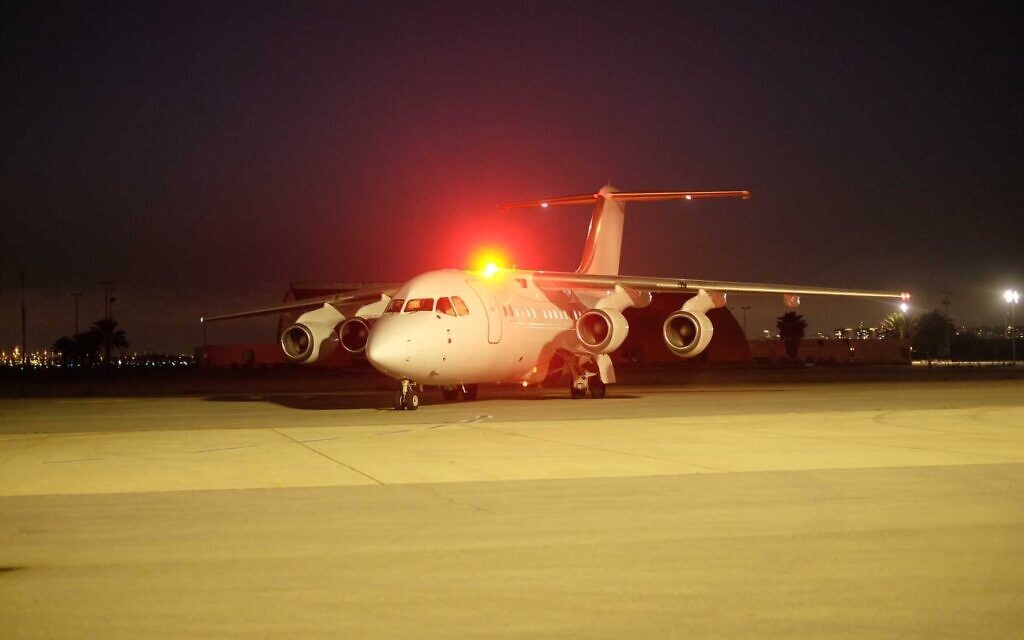 The nine survivors on the special rescue flight that landed Wednesday night had medical needs that required special accommodations and were thus unable to travel on a regular flight, according to the ZAKA emergency response group, which co-organized the medical flight with IFCJ. Twelve other refugees, not Holocaust survivors, who required such care were also on the flight, a ZAKA spokesperson said.

It was the fourth such medical rescue flight to arrive in Israel since Russia invaded Ukraine. The plane took off from Moldova, where the passengers had been gathered and put up in a hotel as they waited for the arrangements for the flight to be finalized.

Immigration Minister Pnina Tamano-Shata met the refugees personally upon their landing at Ben Gurion Airport. Speaking to volunteers on the tarmac before the plane touched down, she noted the resonance of Wednesday’s flight landing at the start of Holocaust Remembrance Day. 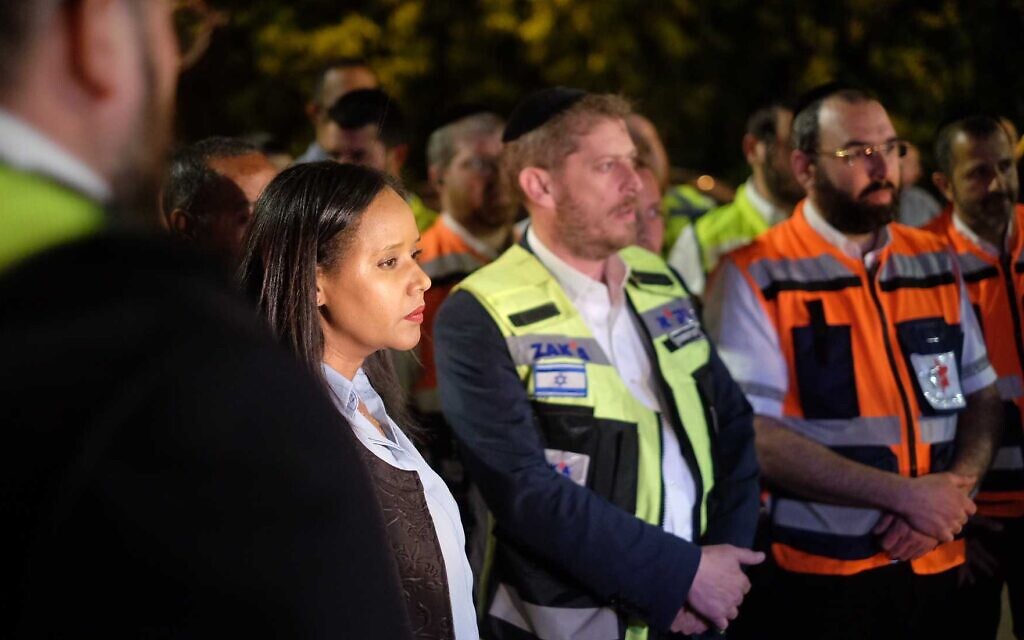 “It is symbolic. During the Holocaust, they didn’t have a place to run. Today, there is a strong Jewish home,” she said.

The head of IFCJ, Ayelet Shiloh Tamir, echoed Tamano-Shata’s remarks, saying the survivors’ arrival on the eve of Holocaust Remembrance Day “symbolized more than anything the essence of Zionism and the Jewish people’s responsibility for one another.”

The plane was met by ambulances to ferry the elderly and infirm passengers directly to hospitals and care facilities or to the homes of family members in Israel. In order to make it easier for the mobility-impaired passengers to exit the plane, a special lift was used.

As each passenger disembarked, they were met with cheers and waves from a crowd of volunteers and government officials waiting beneath the plane and given roses and small Israeli flags. 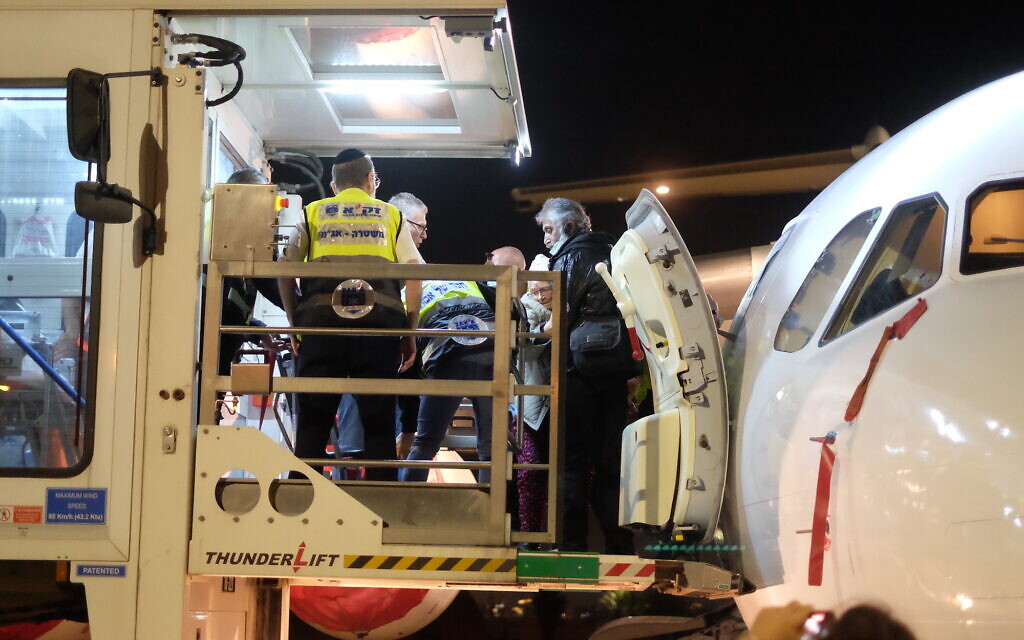 An elderly Ukrainian refugee is helped off a special medical transport plane at Ben Gurion Airport on April 27, 2022. (Judah Ari Gross/Times of Israel)

The oldest passenger on the flight was Tatyna Ryabaya, 99, who traveled with her 73-year-old daughter.

She recalled making a similar escape during the Holocaust, in which large portions of her family were killed. 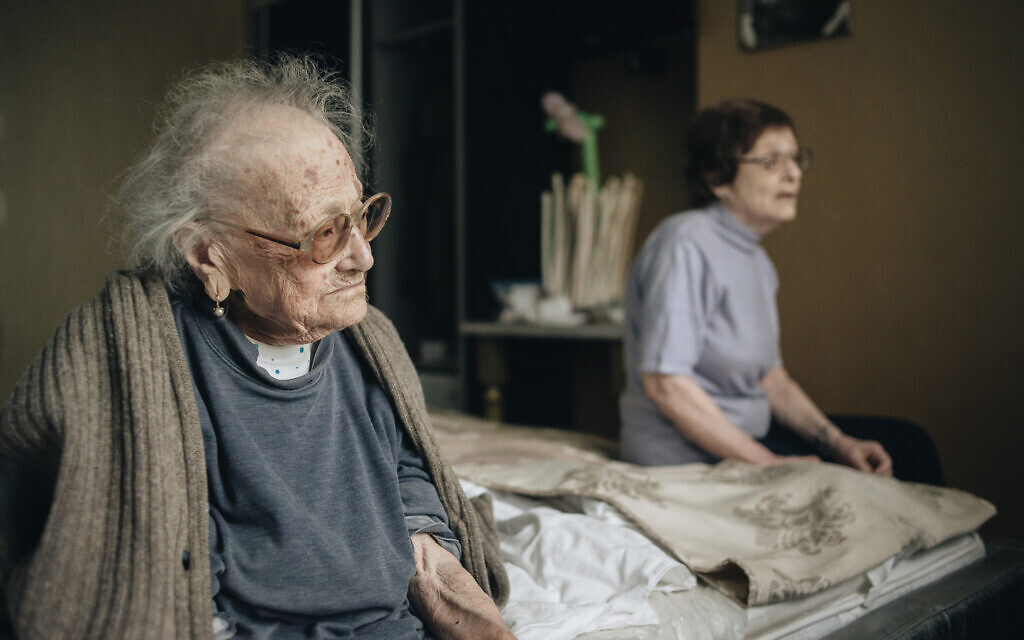 Holocaust survivor and refugee Tatyna Ryabaya, 99, and her daughter sit on a bed in a hotel room in Moldova after fleeing Ukraine before flying to Israel on a special medical transport flight on April 27, 2022. (International Fellowship of Christians and Jews)

“Then too we traveled to a faraway part of Russia, then too the path was dangerous but we wanted to save our lives. I didn’t believe that at my age — I am almost 100 — I would need to go through that again. It’s very hard to leave everything behind at my age,” Ryabaya said.

Indeed, the pile of luggage for the roughly two dozen passengers on board the flight was painfully small, as they were forced to leave nearly all of their possessions behind save for what could fit in a small suitcase or a plastic bag.

For many Holocaust survivors and other elderly Ukrainians, fleeing home was not an easy option, not only from an emotional standpoint but physically and logistically, due to the difficulties of traveling to the border. 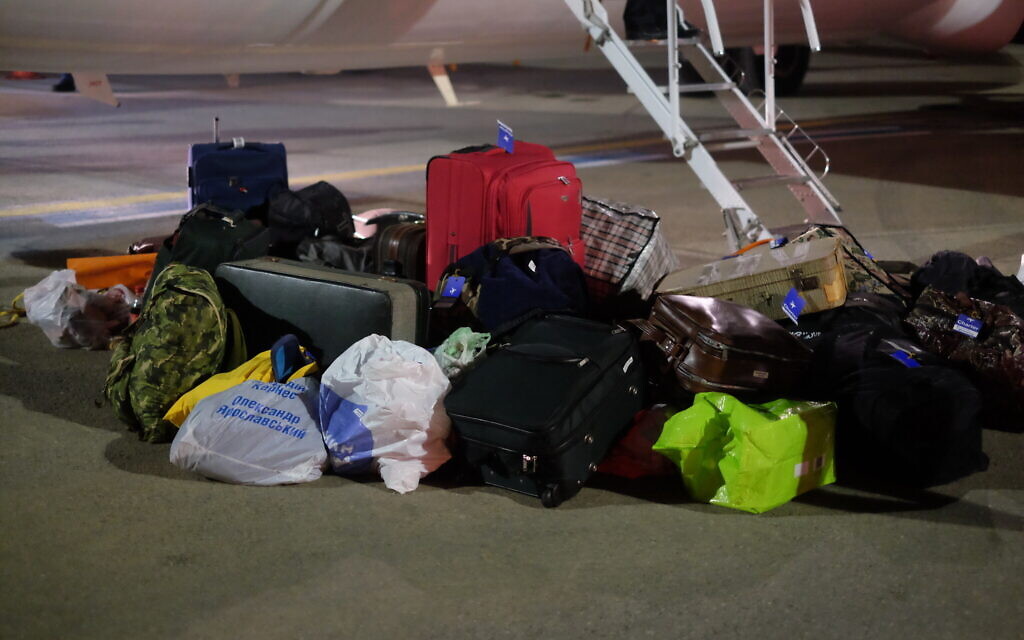 A pile of luggage from two dozen Ukrainian refugees who landed at Ben Gurion Airport on April 27, 2022. (Judah Ari Gross/Times of Israel)

“I left Kharkiv two weeks ago. The entire city was destroyed. Everyone in my building hid in the subway station, but because of my medical condition, I couldn’t go down there. I stayed alone in my apartment for 10 days. I felt like I was in solitary confinement. They shut off our power, I had almost nothing left to eat. Volunteers couldn’t really get to me nor could my family,” Zhilinska said.

“I was alone in my nine-story building, without power and without the ability to connect to the world. I was like that for 10 days and then I was convinced and decided that I needed to leave my city and immigrate to Israel,” she said.

Valery Kanievski, one of the other survivors on the flight also from Kharkiv, said that while he and his wife encouraged their son to immigrate to Israel they had never planned to do so themselves. 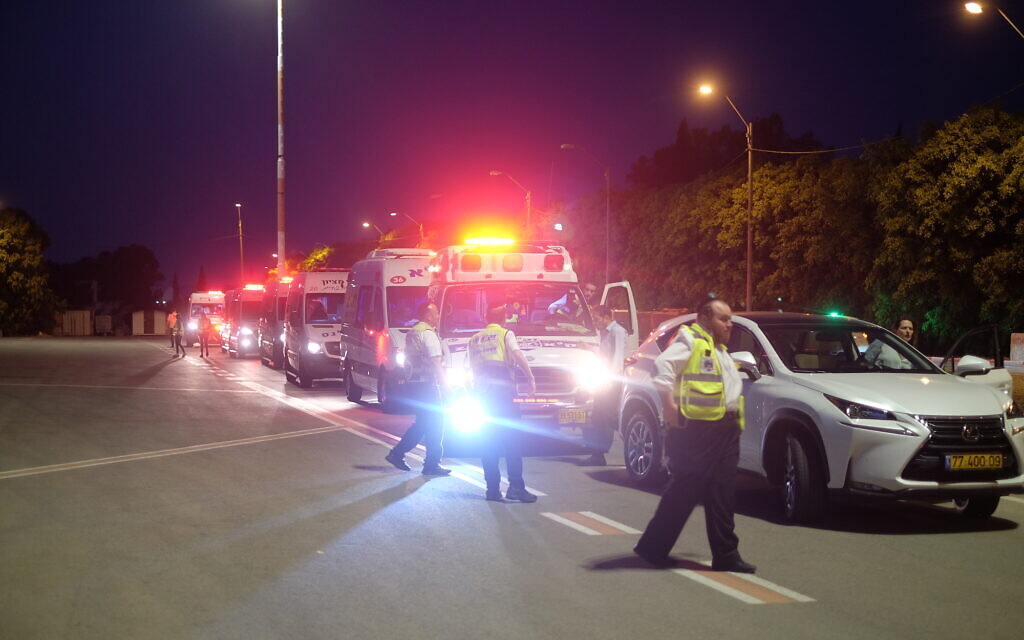 A fleet of ambulances wait to transport elderly and infirm Ukrainian refugees at Ben Gurion Airport on April 27, 2022. (Judah Ari Gross/Times of Israel)

“Our original plan was that our son would move to Israel and we would come to visit, but the plan changed because of the war. They blew up our city. That is a terrible feeling. The gunfire and the explosions just never stopped, and the feeling of terrible fear was with us constantly,” Kanievski said, recalling how his brother — also a Holocaust survivor — was nearly killed in one such bombing.

“When World War II started I was little, but I still remember our escape perfectly. I remember the bombings and I remember the fear. It is the same exact feeling that we have now,” he said.

Sorgente articolo:
Fleeing war yet again, 21 Holocaust survivors touch down in Israel on rescue flights – The Times of Israel