Israel came to a standstill at 10 a.m. on Thursday as sirens wailed throughout the country in memory of the six million Jews murdered by the Nazis during World War II.

The annual Holocaust Remembrance Day is one of the most solemn days on Israel’s national calendar, with much of the country all but shutting down for those two minutes to honor those who suffered under the Nazi killing machine.

The siren halts Israeli outdoor life — pedestrians stand in place, buses stop on busy streets and cars pull over on major highways, with drivers standing on the roads with their heads bowed.

The siren also heralds the start of the main daytime ceremonies for the somber day that began the night before with an official opening event at the Yad Vashem Holocaust museum in Jerusalem.

Ceremonies are also held in schools, public institutions, and army bases. At 11 a.m. the “Unto Every Person There is a Name” ceremony begins at the Knesset, an official annual event during which lawmakers read out the names of Holocaust victims.

On Holocaust Remembrance Day, many survivors attend remembrance ceremonies, share stories with teenagers and participate in memorial marches at former concentration camps in Europe. This year, the annual March of the Living resumes after a two-year hiatus due to the COVID-19 pandemic, in what will likely be the final time Holocaust survivors participate in the event. 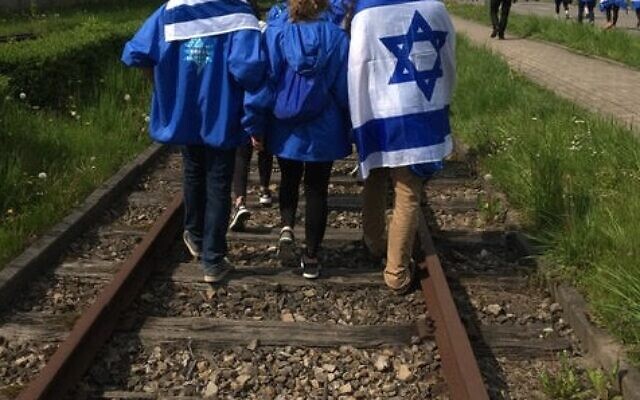 International March of the Living in Poland, with participants marching between Auschwitz I and Birkenau (courtesy)

A closing ceremony for the day will be held at the Ghetto Fighters’ House museum in Kibbutz Lohamei HaGeta’ot, a kibbutz that was established by Holocaust survivors.

At the ceremony, Israel’s leaders pleaded for an end to political divisions and warned against antisemitic rhetoric or attempts to compare the slaughter of Europe’s Jews to other atrocities.

Both Bennett and Herzog focused on a separate single Holocaust incident to evoke the larger, incomprehensible horrors of the Nazi genocide while speaking at Yad Vashem, Israel’s national Holocaust memorial and museum.

Bennett, who is holding onto power despite losing his parliamentary majority, railed against politics and tribalism that have riven Israel in recent years. He noted that divisions between right- and left-wing ideologies frayed ties between Jews during the Warsaw Ghetto uprising.

“Even in the darkest days of Jewish history, in the inferno of destruction, the left and right failed to cooperate. Each group fought alone against the Germans,” he said.

“We must not dismantle Israel from within. Today, thank God, in the State of Israel, we have one army, one government, one parliament and one people — the people of Israel,” he added. 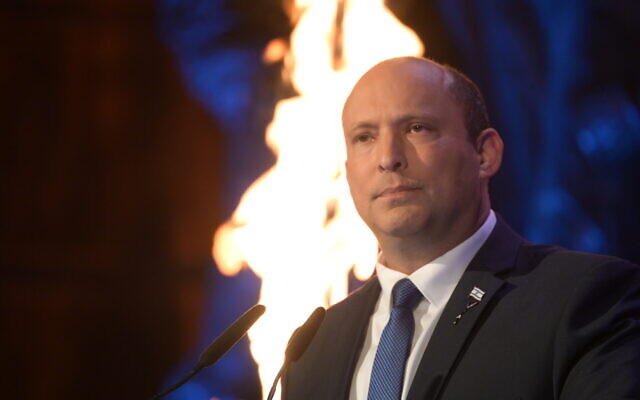 Bennett also rejected Holocaust comparisons, which have become common surrounding Russia’s invasion of Ukraine. Last month, some Israeli lawmakers tore into Ukrainian President Volodymyr Zelensky when he compared his country to the Holocaust during a speech to Israeli politicians.

“The Holocaust is an unprecedented event in human history. I take the trouble to say this because as the years pass, more and more serious events are compared to the Holocaust,” Bennett said.

“But no, even the most serious wars today are not the Holocaust and are not like the Holocaust,” he said, without directly mentioning Ukraine.

“No event in history, cruel as it may have been, compares to the destruction of Europe’s Jews at the hands of the Nazis and their collaborators,” Bennett said.

History is rife with calamity, but the Holocaust stands apart in its singular goal of racial extermination, he said.

“Never, in any place or at any time, has one nation acted to destroy another, in a way that was so planned, systematic and coldhearted, completely due to ideology and without another purpose,” he said.

Also speaking Wednesday evening at Yad Vashem, Defense Minister Benny Gantz said that the “mission to protect the Israeli people is stronger than any ideological debate” and was no less important than Israel’s “readiness to attack Iran’s nuclear facilities.”

Israeli officials often mention the security threats faced by the country in addresses for Holocaust Remembrance Day, said Gantz, “especially Iran, which seeks to acquire nuclear weapons and become an existential threat to us.

“Indeed, the State of Israel must have military power and moral power alongside it. This power and morality stem from our ability to live as a strong, cohesive society, and not as a people scattered in the diasporas, divided and separated. Our resilience as a society enables and justifies our existence,” added Gantz.

In his speech Wednesday, Bennett used a “witness sheet” of an infant girl, an official Yad Vashem document that outlines the basic biographical details of a Jew who was murdered in the Holocaust, to illustrate the depth of the Holocaust horrors. 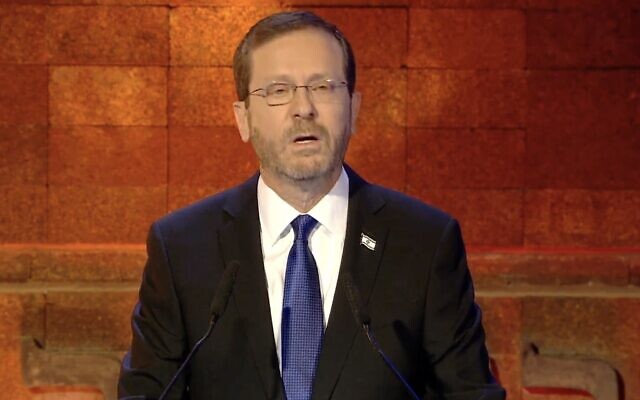 On the sheet the girl’s first name was left blank, her last name was Reich, and her birthplace and place of death were both listed as Auschwitz, Bennett noted.

“Circumstances of her death: taken immediately from her mother,” the prime minister read. “Age at the time of death: half an hour.”

The sheet was filled out by her mother, Irene Reich.

Herzog used a photo of Nazi soldiers and Ukrainian militia executing a Jewish family at the edge of a pit in Miropol, Ukraine, in 1941 to evoke the horrors of the Nazi genocide during his speech.

In the photo, a mother clasps her young son’s hand, bending toward him, as the men shoot her in the back of the head. The boy is barefoot, looking toward the trees.

Smoke from the gunfire hides the mother’s face in a ghostly plume. Another child is in her lap, barely visible in her polka dot skirt. The killers appear to be enjoying themselves.

“What did the mother whisper in her little boy’s ear? Did she beg him not to cry? And what of the child? Did he cry? Did he stay silent? Did he understand? Was he afraid?” Herzog said. “The photograph is silent, but its voice cries out. It shakes us. It stuns us to silence.”

The photo was the focus of the 2021 book “The Ravine” by historian Wendy Lower. Herzog said he experienced “grief, fury and pain” when he saw the photo in the book.

The Nazis killed over 1 million Jews in the “Holocaust by bullets,” gunning them down in forests and fields, away from the infamous death camps.

Herzog evoked the State of Israel as a “lighthouse” for the world’s Jewry after the Holocaust, and said discourse that questions Israel’s right to exist is “not legitimate diplomacy but pure antisemitism, which must be uprooted.”

Sorgente articolo:
Israel comes to a standstill as it commemorates Holocaust victims – The Times of Israel