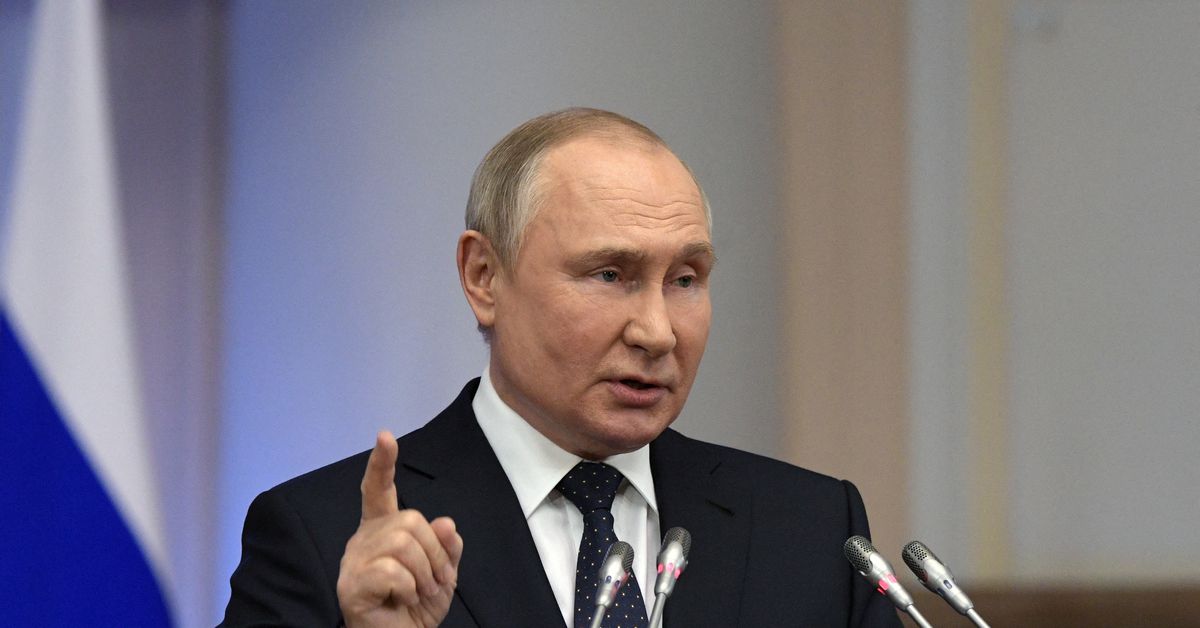 Russian President Vladimir Putin delivers a speech during a meeting of the Council of Legislators at the Federal Assembly in Saint Petersburg, Russia April 27, 2022. Sputnik/Alexei Danichev/Kremlin via REUTERS

LONDON, April 28 (Reuters) – Russia on Thursday warned the West that there would be a tough military response to any further attack on Russian territory, accusing the United States and its key allies of undermining European security by openly inciting Ukraine to assault Russia.

Two months since Russia invaded Ukraine, Russia has in recent days reported what it says are a series of attacks by Ukrainian forces on Russian regions which border Ukraine, and has warned that such attacks risk a significant escalation.

Ukraine has not directly accepted responsibility but says the incidents are payback, while Russia has taken umbrage at statements from NATO-member Britain that it is legitimate for Ukraine to target Russian logistics. read more

“In the West, they are openly calling on Kyiv to attack Russia including with the use of weapons received from NATO countries,” Russian foreign ministry spokeswoman Maria Zakharova told reporters in Moscow.

“I don’t advise you to test our patience further.”

The Kremlin said Western – and in particular British – attempts to supply heavy weapons to Ukraine threatened the security of Europe. read more

“In itself, the tendency to pump weapons, including heavy weapons, to Ukraine and other countries are actions that threaten the security of the continent and provoke instability,” Kremlin spokesman Dmitry Peskov told reporters.

Sergei Naryshkin, the chief of Russia’s Foreign Intelligence Service (SVR), accused the United States and Poland of plotting to gain a sphere of influence in Ukraine, the strongest signal from Moscow that the war could end with forced partition of Ukraine between the West and Russia. read more

Russia’s defence ministry said on Tuesday that if such attacks continued then Moscow would target decision-making centres in Ukraine, including those where it said Western advisers were helping Kyiv.

“Kyiv and West capitals should take the statement from the Ministry of Defence seriously that further inciting of Ukraine to strike Russian territory will definitely lead to a tough response from Russia,” Zakharova said.

Zakharova cast Ukrainian President Volodymyr Zelenskiy as a puppet of the West, who was being used by the United States to threaten Russia.

“You are being used,” Zakharova said.

The United States has ruled out sending its own or NATO forces to Ukraine but Washington and its European allies have supplied weapons to Kyiv such as drones, Howitzer heavy artillery, anti-aircraft Stinger and anti-tank Javelin missiles.

Total U.S. security assistance since the invasion amounts to about $3.7 billion, a U.S. official said.

Russian President Vladimir Putin casts such large arms shipments as part of a broader plan by the United States and its allies to destroy Russia – and has promised that it will never succeed.

Ukraine says it is fighting an imperial-style land grab and that Putin’s claims of genocide are nonsense. Zelenskiy has been pleading with U.S. and European leaders to supply Kyiv with heavier arms and equipment.