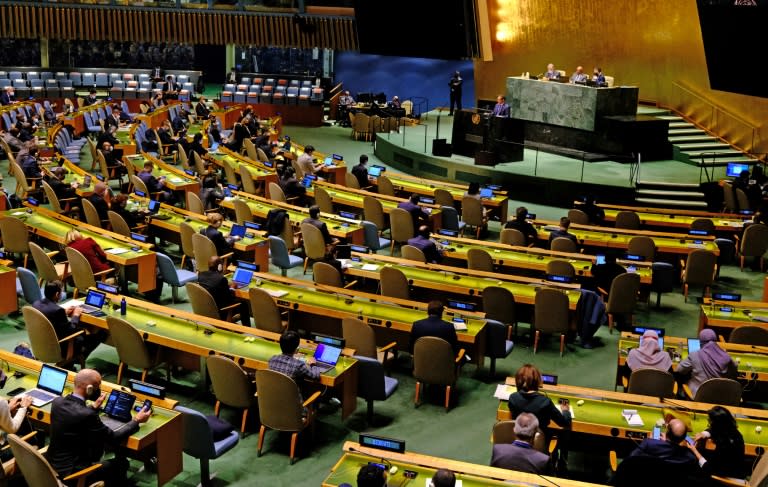 The 193 members of the United Nations General Assembly adopted by consensus Tuesday a resolution requiring the five permanent members of the Security Council to justify their use of the veto.

The push for reform, which was greeted with applause in the chamber, was revived by Russia’s invasion of Ukraine.

The measure is intended to make veto-holders United States, China, Russia, France and Britain “pay a higher political price” when they use the veto to strike down a Security Council resolution, said an ambassador who asked to remain anonymous.

It is unclear if the five permanent members will use the veto less, or more — as they could propose controversial texts they know their rivals will veto only to force them to justify their stance publicly.

First proposed more than two years ago, the measure provides for the General Assembly to be convened within 10 working days after a veto “to hold a debate on the situation as to which the veto was cast,” according to the text.

Almost 100 countries joined Liechtenstein in co-sponsoring the reform, including the United States, Britain and France — a rapid rally of support that caused widespread surprise at the UN.

Neither Russia nor China were among the sponsors, though. A diplomat from one of the two countries, who asked not to be named, criticized the move, saying it will “divide” the UN even further.

The measure will “create a new procedure,” said Liechtenstein’s ambassador Christian Wenaweser, who insisted the proposal is “not against anyone.”

“It is not directed against Russia,” he said, despite the fact that the proposal’s revival came as the Security Council has proven incapable of condemning Russia’s invasion of Ukraine, due to Moscow’s veto power.

From the United States’ perspective, Russia has abused its right of veto for two decades and the proposed text is intended to remedy the situation.

Wenaweser said the text aimed to “promote the role of (the) United Nations, to promote multilateralism and to promote the voice of all of us who are not veto holders and who are not on the Security Council on matters of international peace and security.”

The text is non-binding, and nothing prevents a country that has used its veto from declining to explain its actions to the General Assembly.

But its application “will shed light” on the use of the veto and on the “blockages” within the Security Council, said one ambassador, on condition of anonymity.

In addition to its five permanent members, the Security Council also has 10 members elected for two years, without the right of veto.

Among the co-sponsors of the resolution were — in addition to Ukraine — both Japan and Germany, which are hoping to become permanent members in a potentially enlarged Security Council.

But neither Brazil nor India, two other potential candidates for a permanent position on the Council, are on the list of co-sponsors obtained by AFP.