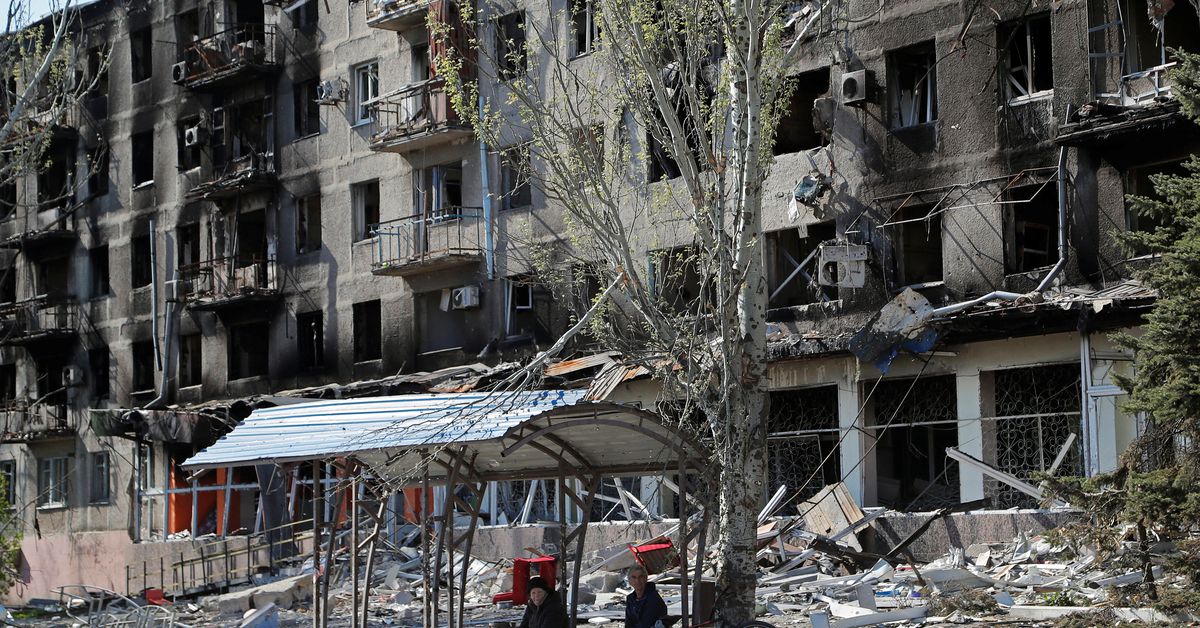 Local residents sit on a bench near an apartment building damaged during Ukraine-Russia conflict in the southern port city of Mariupol, Ukraine April 28, 2022. REUTERS/Alexander Ermochenko

MARIUPOL, Ukraine, April 29 (Reuters) – Residents of Mariupol recounted the horrors of the battle for their now devastated city this week as they sifted through the rubble for belongings, cooked meals by the roadside or just stared at the charred shells of buildings all around them.

“It was terrible… like films that show the last days of the planet – the same thing happened here,” said Viktoria Nikolayeva, 54, who like many residents stayed with her family in a basement as Russian and Ukrainian forces battled overhead.

“We were hungry, the child was crying when the Grad (multiple rocket launcher) shells were striking near the house. We were thinking, this is it, the end. It can’t be described… I can’t put it into words,” she tearfully told Reuters.

Emergency services were seen on the streets collecting the bodies of those who did not survive the weeks of fighting.

Mariupol in southeast Ukraine saw some of the heaviest fighting of the war so far and much of the port city now lies in ruins. Russia declared victory there last week but hundreds of Ukrainian forces and civilians remain trapped in the vast industrial complex of the city’s Azovstal steel works.

Ukrainian President Volodymyr Zelenskiy’s office said an operation was planned on Friday to get civilians out of the plant but gave no details. Previous evacuation efforts have failed.

Russia has denied targetting civilians in what it calls a “special operation” to disarm Ukraine and protect it from fascists. Ukraine and the West say the fascist allegation is baseless and that the war is an unprovoked act of aggression.

In the shadow of Mariupol’s blasted and wrecked apartment blocks – many missing walls as well as windows and balconies – a woman wearily sliced an onion on a table set out in the spring sunshine. A cyclist rode by. A man loaded furniture items onto a truck.

A makeshift wooden cross – one of many around the city – marked the spot near an apartment block where somebody had been hastily and temporarily buried during the fighting.

Mayor Vadym Boichenko has said tens of thousands of civilians were killed in Mariupol. Organisations such as the International Committee of the Red Cross and the United Nations say they believe thousands have died.

“It was a massacre. It was the scariest thing when the shells were flying overhead. Shells, rounds and all such, you couldn’t survive it. And yet we did,” said Vitaliy Kudasov, 71.

“A shell exploded eight metres away… I didn’t manage to get to the basement in time, I felt the heat on my face. But whatever, thank God it will all be OK,” he added.