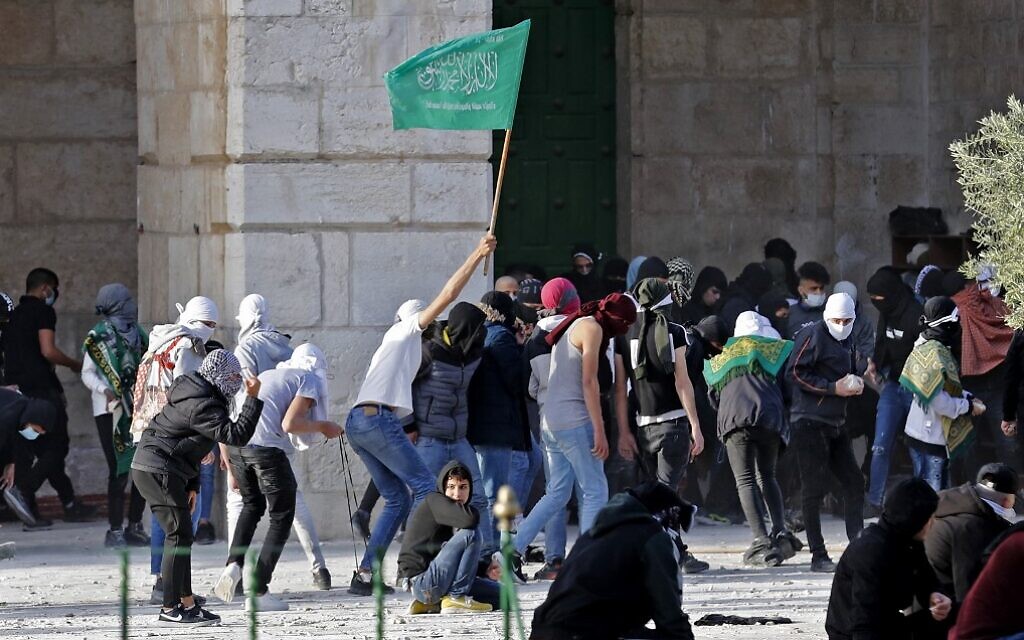 Fighting broke out between Palestinians and police on the Temple Mount early Friday morning, the last Friday of the Ramadan holy month, which has seen regular clashes at the Jerusalem holy site.

Palestinians at the Old City compound threw rocks and launched fireworks toward officers and the Western Wall, located beneath the Temple Mount, which police said led them to enter the Temple Mount to disperse the rioters.

At least one stone thrown by the rioters landed in the Western Wall prayer area, police said.

The Palestinian Red Crescent said 42 people were hurt, 22 of whom were taken to the hospital. None of the injuries were serious, according to the Red Crescent.

Police announced three people were arrested, two for throwing rocks and one suspected of inciting a mob.

“For the past hour, the site has been quiet and (Muslim) worshippers are safely entering (the compound)” police said.

The clashes ended around an hour after they began when other Palestinians in the compound intervened, convincing the stone throwers and the police to pull back.

Tens of thousands of worshipers are expected to attend Friday prayers at the mosque complex.

Police said Thursday they were boosting deployment in Jerusalem with around 3,000 officers ahead of the Friday prayers.

Troops were spread out across Jerusalem’s Old City and the main roads leading to the Temple Mount compound, police said. Some streets in the Old City and East Jerusalem were closed to traffic.

The last Friday of the holy month is also known among Palestinians as Quds Day, a day of solidarity initiated by Iran’s Ayatollah Khomeini.

Iran initiated Quds Day, or Jerusalem Day, in 1979, the year of the Islamic Revolution. The day is commemorated with anti-Israel speeches, events, and threats to “liberate” Jerusalem from Israeli control.

In the video released by the terror group ahead of Quds Day, marked on Friday, a drone could be seen dropping an explosive device on an Israeli military jeep in an incident that took place in September 2019.

“The enemy should think carefully and reflect: What are our drones like today, and what are their capabilities three years after that operation?” said Abu Hamza, a spokesperson for Islamic Jihad’s military wing.

The threat and the reinforced police presence in Jerusalem came amid heightened tensions in the capital and following regular clashes between police and Palestinian rioters at the Temple Mount throughout April, as Muslims marked Ramadan and Jews celebrated Passover.

On Wednesday night, over 100,000 Muslim worshipers took part in mass prayers at the Al-Aqsa Mosque for the Muslim holiday of Laylat al-Qadr (Night of Destiny), marking the day Muslims believe the first verses of the Quran were revealed to Muhammad.

Thousands of police were deployed to Jerusalem’s Old City ahead of the prayers, with no unusual incidents reported.

Jordan, which oversees the flashpoint site via its control of the Waqf Islamic endowment that administers the compound, has been sharply and repeatedly critical in recent weeks of the behavior of Israeli security forces atop the Temple Mount.

Jordan has accused Israel of violating the status quo at the site, under which Muslims are allowed to visit and pray while Jews cannot pray and may only visit during restricted time slots.

Police have said they would bar non-Muslims from visiting the Temple Mount and the Al-Aqsa Mosque compound from Friday until the end of the Muslim holy month of Ramadan on May 1 in order to reduce tensions and potential clashes — a policy that has been in place for years.

Earlier this month, there were serious clashes between police and Palestinian rioters, leading to hundreds of injuries and arrests.

Clashes at the holy site can spiral into a wider conflict, and were one of the triggers for the war between Israel and Hamas last year.