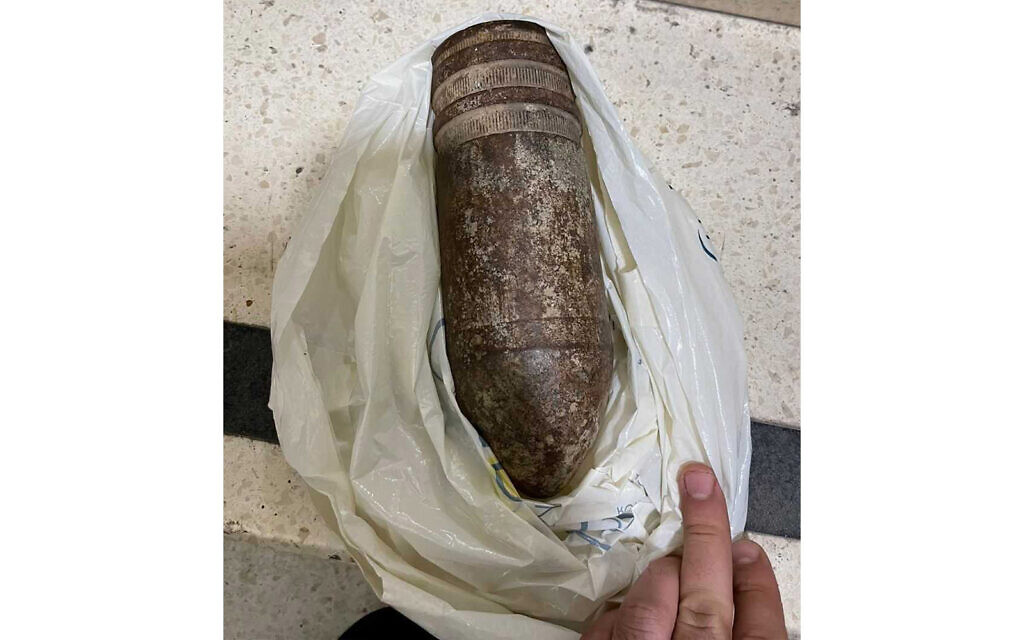 Panic broke out at Israel’s main airport on Thursday after an American family tried to board a plane with an old, unexploded bomb in their luggage.

The Airports Authority said the family had traveled to northern Israel’s Golan Heights, where one of the children found the ordnance, which the authority called “a piece of a shell.”

The region was the scene of fierce fighting in the 1967 Six Day War, and remnants of the conflict, such as land mines and barbed wire, are scattered in the area.

The Airports Authority released a photo of the rusted ordnance, which appeared to be part of an artillery shell, wrapped in a plastic bag.

The authority said the family brought the shell in their luggage to Ben Gurion International Airport outside Tel Aviv, apparently as a souvenir.

“When they arrived to check their luggage, they showed the piece of the shell to security,” the Airports Authority said. “Since it was a piece of a shell, the evacuation of the area was announced.”

Panic broke out among travelers in the departures terminal as the evacuation announcement sparked fears of an attack. Israel has been on edge after a series of deadly terror attacks around the country killed 14 people.

A 32-year-old Israeli man climbed onto the luggage conveyor belt, ran on top of it, and fell down. He was injured and evacuated to a hospital for treatment.

“There was a lot of shouting. I just felt that I had to run for my life,” he told Ynet.

Video from the scene showed travelers running from the departures hall, shouting, lying on the floor and ducking under tables for cover, as an announcement asked them to “slowly” evacuate the area.

After security ruled out any danger, travelers were allowed back into the terminal.

The family was allowed to board the plane back to the US after a short investigation, the authority said. They were not allowed to take the bomb with them.

Sorgente articolo:
Panic at the airport after American family tries to board plane with souvenir bomb – The Times of Israel