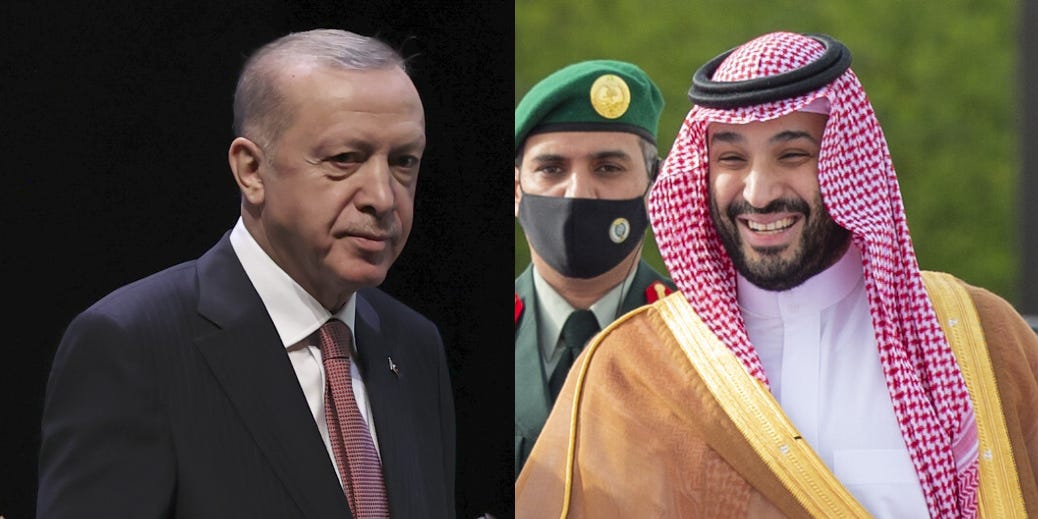 Turkish President Recep Tayyip Erdoğan is visiting Saudi Arabia on Thursday, putting the 2018 murder of Jamal Khashoggi behind him for good.

Erdoğan’s office said in a statement Thursday that the visit will last two days and came following an invitation from King Salman.

News of the meeting comes following a monthslong campaign by Turkey to repair relations with Saudi Arabia.

Khashoggi, a critical Saudi journalist who was living in the US, was brutally killed in the Saudi consulate in Istanbul, Turkey, in October 2018. The CIA later concluded that Crown Prince Mohammed likely ordered the hit, though the prince has vehemently denied the accusation.

Shortly after Khashoggi’s death, Erdoğan accused the “highest levels” of the Saudi government — without naming Crown Prince Mohammed — of authorizing the murder and later demanded that the Saudis extradite the suspects to Turkey. His request was denied.

In turn, Saudi Arabia launched an unofficial boycott on Turkish goods, a move which saw Turkish exports to Saudi Arabia drop more than 90% by March 2021. The boycott eased in January this year.

Turkey is currently facing severe financial problems, such as rising inflation rates and a spike in energy prices as a result of Russia’s invasion of Ukraine, and it hopes that mending relations with Saudi Arabia — as well as with Israel, Egypt, and the UAE — will help cushion the blow.

Erdogan’s trip to Riyadh also comes on the heels of an April 7 decision by Turkish prosecutors to abandon their attempt to prosecute, in absentia, 26 Saudis accused of murdering Khashoggi and hand control of the case to Saudi Arabia.

Saudi prosecutors requested a transfer of the case in March, Reuters said. Saudi Arabia conducted its own trial of 11 people accused of killing Khashoggi in September 2020, which was widely decried as a sham by human-rights groups.

The transfer of the case means that all international attempts to get justice over the murder outside of Saudi Arabia have now ceased.

But Khashoggi’s widow, Hatice Cengiz, has vowed to keep fighting, and a number of independent lawsuits over Khashoggi’s death, including from Cengiz, remain active.

“We will not give up just because the judicial process has taken such a decision now,” Cengiz said of the Turkish case. “I will continue with the legal process as much as I can.”