Friday night’s shooting at the entrance to Ariel claimed the life of a guard in his twenties.

The two shooters, whose attack was captured by security cameras, fled the scene.

The Israel Defense Forces said Saturday morning that the security guard, whose name has not been released for publication, was killed as he shielded another security guard at the gate and moved to block the entrance to the settlement.

The second guard was not wounded in the attack.

“It was a very difficult attack and there has been a night of operational activity,” said Brig. Gen. Avi Blot. “We will get to the terrorists. There are many operations that are being carried out on the ground, including intelligence.”

Early Saturday Palestinian media reports claimed that a burnt vehicle had been found in the area, and that it could be the car used by the terrorists.

The attack was claimed by the Al-Aqsa Martyr’s Brigades, a coalition of armed groups affiliated with the Palestinian Authority’s ruling Fatah party.

“We take responsibility for the heroic operation in Ariel that resulted in the death of a Zionist officer. All this activity is a response to the Israeli aggression in Jerusalem,” a masked man said in a video circulated on social media.

The terror group was also behind the deadly attack in Bnei Brak last month.

The Hamas terror group praised the shooting, saying it was a “heroic operation” and a “natural response to the crimes of the occupation and its settlers.” 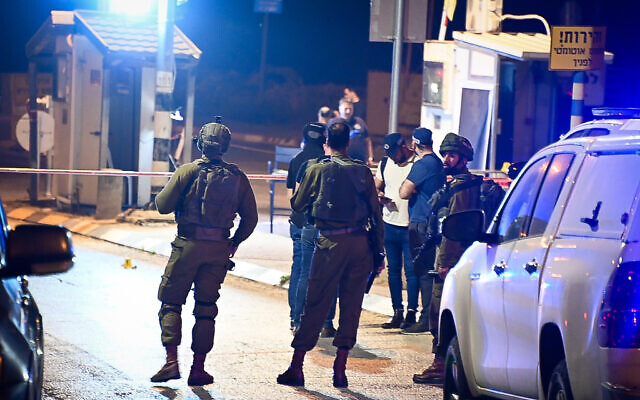 Israeli security personnel at the scene of a shooting attack, at the entrance to Ariel, in the West Bank, on April 30, 2022 (Flash90)

Security camera footage from the scene of the attack at Ariel showed a blue Suzuki vehicle driving up to a guard post, where a person in the passenger seat opened fire.

The gunman and the driver then both got out and continued to fire into the guard post before driving off.

The Magen David Adom ambulance service said its medics declared the man dead at the scene. The second security guard, apparently protected by the slain man, was unharmed.

Ariel and other settlements in the area issued a lockdown order over fears the gunmen may attack again.

Security forces blocked off roads as large numbers of police officers and soldiers launched a massive manhunt for the gunmen. The Israel Defense Forces said special forces were participating in the search.

Also overnight, Palestinians reported that a man was killed by Israeli fire in the West Bank village of Azzun, near Qalqilya.

Media reports indicated he was killed during clashes in the area.

Further details were not immediately available.

The attack and clashes came as tensions have risen sharply between Israel and the Palestinians in recent weeks against the backdrop of repeated terror attacks in Israeli cities that left 14 dead.

Emmanuel Fabian contributed to this report.