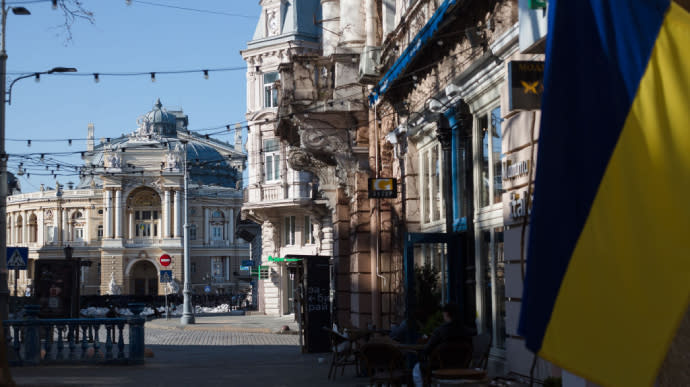 DENYS KARLOVSKYI – SATURDAY, 30 APRIL 2022, 16:04 The Russian special services were preparing provocations and riots in Odesa, together with criminal connections, for the anniversary of the tragic events of 2 May, 2014 (see below). Source: Department of Strategic Investigations of the National Police Quote: “According to the department’s staff, the Russian special services, through criminals under their control, were intending to destabilise the situation in the region by inciting riots, organising mass protests and riots that could undermine statehood and overthrow Ukraine’s state system. According to the enemy’s plans, they had to influence and act through their proxies who have settled in the Odesa region. The final date for the implementation of criminal plans was to be the anniversary of the tragic events – 2 May.” Details: During searches of the criminals’ base, law enforcement officers seized a large number of firearms, prohibited symbols of the Soviet regime, grenades, ammunition, instructions for infiltrators and brochures. A video made by law enforcement officers shows that many brochures mention the deaths that occurred in the centre of Odesa on 2 May. Police also found a set of copies of Soviet military medals and honours in the bag. Police investigators, together with employees of the State Bureau of Investigation, are conducting investigations to identify other persons involved in the Russian special services’ sabotage operation. Background: A curfew will be imposed in Odesa from the evening of 1 May to the morning of 3 May, due to the possible threat of shelling and provocations by the Russian occupiers. Trains running through railway stations in the city have also been cancelled. On 2 May, 2014, clashes broke out in Odesa between “supporters of federalization” from the so-called “Anti-Maidan” and “supporters of unity”, in which 46 people were killed (forty men, seven women and one minor), many of them due to a fire in the local House of Trade Unions. The Putin regimes’s propaganda has crystallized and is actively taking the line that on that day “Ukrainian Nazis burned several dozen opponents of the Kyiv regime alive in the House of Trade Unions.”

Sorgente articolo:
Russian special services were preparing a revolt in Odesa through criminals in their control – Yahoo News