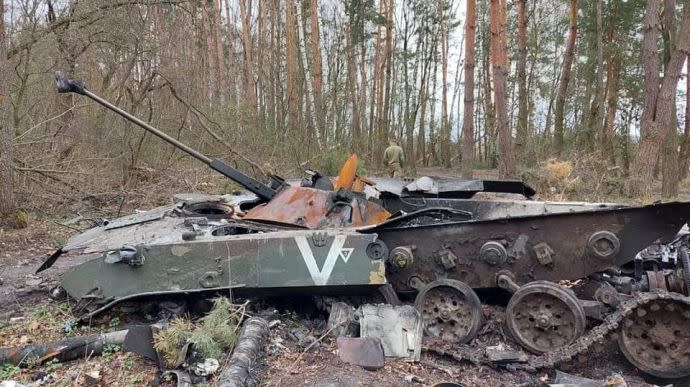 KATERYNA TYSHCHENKO – FRIDAY, 29 APRIL 2022, 19:09 The Russians continue to carry out offensive operations in eastern Ukraine in order to establish full control over the territory of the Donetsk and Luhansk regions and hold onto the land corridor with temporarily occupied Crimea. Source: Summary of the General Staff as of 18:00 Quote: “On the Donetsk and Taurida fronts, enemy units are trying to conduct an offensive towards Lymansk, Sieverodonetsk and Popasniansk. The enemy continues to attempt to establish complete control over the settlements of Rubizhne and Popasna and is taking preparatory measures to advance towards Sieverodonetsk. The enemy continues to shell our troops.” Details : On the Kurakhivsk front, a group of occupying troops was reinforced with additional artillery units from the 1st Army Corps. On the Mariupol front, Russian forces continued to inflict air strikes on Mariupol. They concentrated their main efforts on blockading the units of the Armed Forces of Ukraine in the vicinity of &#8203;&#8203;the Azovstal plant, and also transferred part of their units from Mariupol to the Kurakhivsk front. On the Volynsk and Polisk fronts, certain units of the armed forces of Belarus continue to strengthen a section of the Ukrainian-Belarusian border in the Brest and Gomel regions. It was noted that checks were made on the readiness of the aviation component of the duty forces and means of the air defence system of Belarus. The threat of missile and bomb attacks on Ukrainian targets from the territory of Belarus remains. On the Siversk front, the enemy is trying, by maintaining the position of an appropriate set of troops , to prevent movement of the reserves of the Armed Forces of Ukraine from the Siversk front to the Eastern Operational Zone. In the border areas with Ukraine, the Bryansk and Kursk regions, the enemy deployed part of the units they had previously withdrawn to restore combat capability. “In the future, the implementation of demonstrative actions and provocations by the enemy in areas adjacent to the state border of Ukraine cannot be ruled out. In particular, there is a possibility that units of the Defence Forces and infrastructure in the border areas will be shelled,” the General Staff noted. On the Slobozhansky front, the Russians’ combined unit from the 6th Combined Arms Army and the coastal troops of the Baltic and Northern Fleets is concentrating its main efforts on holding its positions in the area north and southeast of the city of Kharkiv and trying to deploy additional artillery units. On the Izyum front, the Russians are operating with forces from the 1st Tank Army, the 20th Army of the Western Military District, the 35th Combined Arms Army, the 68th Army Corps of the Eastern Military District and airborne troops. Their main efforts are focused on conducting reconnaissance and inflicting fire damage on units of the Armed Forces of Ukraine. To ensure additional transfer of troops in the Izyum direction, the occupiers are constructing additional pontoon-bridges across the Siverskyi Donets River. The Russians continue to inflict air and missile strikes in order to destroy civilian infrastructure and disrupt the logistics systems of Ukrainian troops. In order to clarify the position of the units of the Defence Forces of Ukraine, the Russians carried out aerial reconnaissance using an Orlan-10 UAV. The Russians continue to lose this type of reconnaissance equipment. On the Yuzhnobuzh and Bessarabsk fronts, the Russians are trying to conduct combat operations with the set of forces available to them in order to improve their tactical position. They continue to regroup, build up a system of fire damage, and improve the engineering equipment of positions. As part of building up the logistics system for their troops, the occupiers set up assembly points for damaged vehicles and points for the repair and reconditioning of equipment. In the Transnistrian region of the Republic of Moldova, the Russian Federation continues to disseminate information through the pro-Kremlin media about the threat to the population of the region from Ukraine. In particular, there are reports of another case of Ukrainian UAVs being used over ammunition depots.

Sorgente articolo:
Russian troops are trying to advance in the east a summary from the General Staff – Yahoo News