Russian forces attempted to storm Kyiv’s government quarters and kill or capture Ukrainian President Volodymyr Zelensky in the first hours of Moscow’s invasion of its neighbor, Zelensky and his close aides indicated in interviews published Thursday.

Speaking to Time magazine, which was given intimate access to Zelensky and his inner circle for two weeks, the president and his confidants described chaos and disbelief as Russian forces began bombarding Ukrainian cities in the early hours of February 24.

According to Time, the Ukrainian military told Zelensky that Russian forces had parachuted into the city with the goal of killing or capturing him and his family. The report did not say where the intelligence on the Russians’ plans came from.

Zelensky told Time that he and his wife Olena Zelenska woke up their kids — a daughter, 17, and son, 9 — as bombs fell nearby, to prepare them to flee. “It was loud. There were explosions over there,” he said.

That night, Time reported, street fighting reached the outskirts of Kyiv’s haphazardly fortified government quarter. Soldiers shut the lights and gave bulletproof vests and automatic rifles to Zelensky and about a dozen of his aides, most of whom had little experience with warfare.

“It was an absolute madhouse,” recalled Oleksiy Arestovych, one of the few aides with a military background. “Automatics for everyone.” 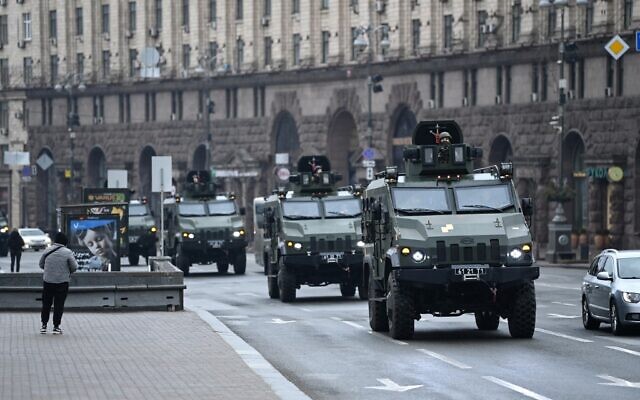 According to Zelensky, his wife and children were still in the compound at the time. No other details about the attempted assaults were provided.

In a separate interview with Polish newspaper Rzeczpospolita published Friday, Zelenska said she had last seen her husband when the bombing began that morning.

When Zelenska woke up on February 24, she said, her husband was already awake and dressed. He told her simply: “It’s started,” and left for the office, she recalled. It was the last time she saw him. 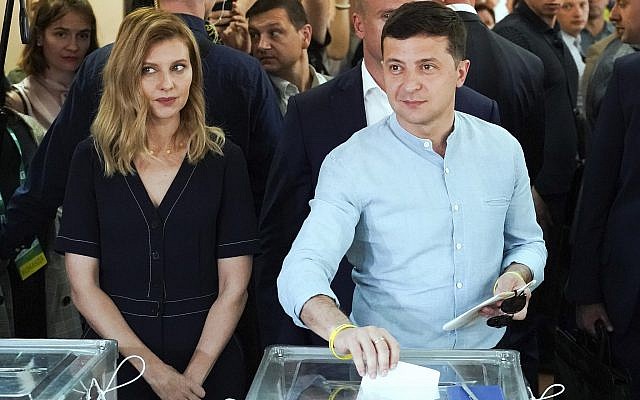 Ukrainian President Volodymyr Zelensky, right, and his wife Olena Zelenska cast their ballots at a polling station during a parliamentary election in Kyiv, Ukraine on July 21, 2019. (AP/Evgeniy Maloletka)

“Since Feb. 24, I have been seeing my husband just like you — on TV and on the video recordings of his speeches,” she said from an undisclosed secure location, where she is hunkering down with her children.

Zelensky admitted to Time that his recollection of the first days was “fragmented.”

The magazine reported that though many were impressed by his gumption in refusing Western offers of evacuation from Kyiv to a secure location — “I need ammunition, not a ride” — he famously told US officials, his bodyguards also thought he should leave for an ultra-secret protected bunker set up for him outside of town. They feared homes and buildings right outside the government compound could be used by snipers to take him out.

Instead, as fighting continued to rage on Kyiv’s streets, Zelensky and aides went outside, where they posted a video to project unity and show they were not leaving the city but would stay to defend it.

The Times of London has previously reported that at least three attempts on Zelensky’s life by Russian assassins were thwarted by Ukraine’s forces in the war’s first week. The newspaper said over 400 mercenaries from the Wagner Group, a security company under the control of a key ally of Russian President Vladimir Putin, and Chechen special forces had been sent to kill Zelensky.

Ukraine later said it had bombed the Chechen fighters after being tipped off about the attempts by a mole inside Russia’s FSB security service.

At the time, Zelensky said he and his family were Russia’s number 1 target.