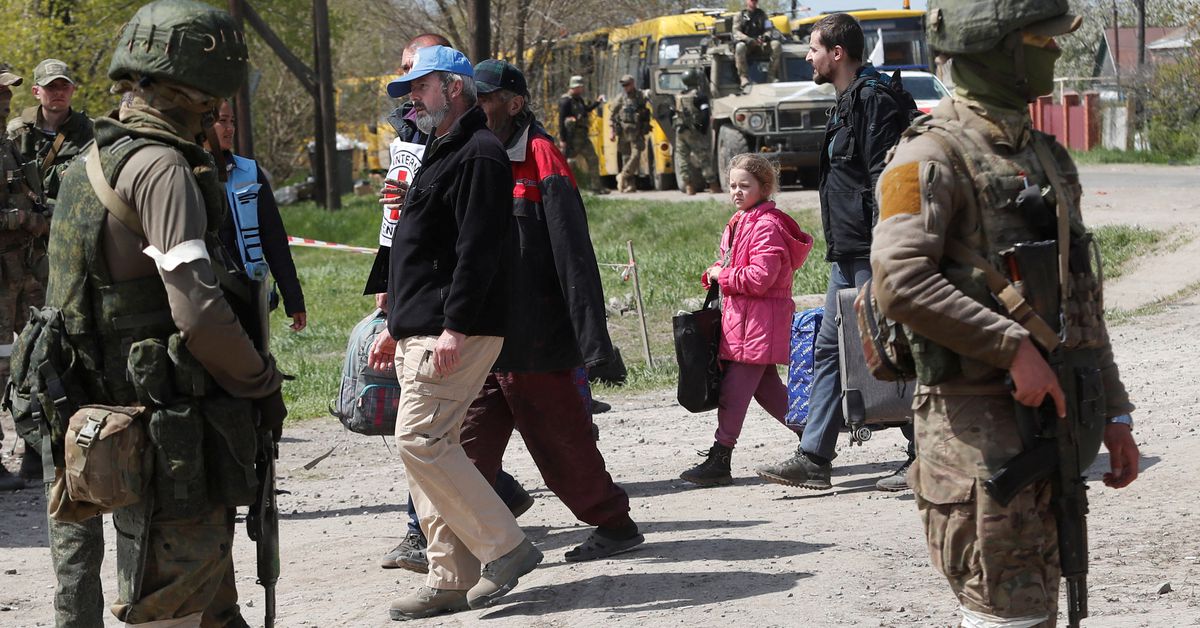 BEZIMENNE, Ukraine, May 1 (Reuters) – Civilians were evacuated on Sunday from the bunkers of Mariupol’s Azovstal steel works after the United Nations and the International Red Cross led a deal to ease the ordeal of the most destructive siege of the Russia-Ukraine war.

The siege of Mariupol, in which Russian forces have pummelled the port city for nearly two months, has turned into a wasteland with an unknown death toll and thousands trying to survive without water, sanitation or food.

The city is under Russian control but some fighters and civilians sheltered underground in the Azovstal works – a vast Soviet-era plant founded under Josef Stalin and designed with a labyrinth of bunkers and tunnels to withstand attack.

After a Reuters photographer on Sunday saw dozens of civilians arriving at a temporary accommodation centre, the United Nations confirmed what it called a safe passage operation to evacuate people from the steel works had been underway from Saturday.

“U.N. confirms that a safe passage operation is ongoing in Azovstal steel plant, in coordination with the ICRC and the parties to the conflict,” U.N. spokesperson Saviano Abreu said.

“At this point, and as the operations are underway, we will not share further details, as it could jeopardize the safety of the civilians and the convoy,” he said.

The Reuters photographer saw civilians arriving in the village of Bezimenne in the Russian-backed Donetsk Region, around 30 km east (20 miles) of Mariupol, where they were receiving refreshments and care after weeks of suffering.

Young children were among those evacuated from the plant – where people cowered underground, huddling together under blankets in the plant’s bunkers and tunnels as the shelling tore their city apart.

Outside blue tents, two children sat looking pensive as they waited, the boy playing with a lighter and heavily armed men looking on. One woman clasped her hands to her face in emotion. A young woman reached out to stroke a cat.

The civilians Reuters saw had been evacuated in a convoy with Russian forces and vehicles with United Nations symbols.

U.N. Secretary General Antonio Guterres said after meeting Ukrainian President Volodymyr Zelenskiy in Kyiv on Thursday that intense discussions were under way to enable the evacuation of Azovstal.

A United Nations spokesman said he was unable to comment immediately. An aide to the mayor of Mariupol declared a period of silence, pending official statements about the evacuations.

Pope Francis on Sunday described the war in Ukraine as a “macabre regression of humanity” that makes him “suffer and cry”, calling for humanitarian corridors to evacuate people trapped in the Mariupol steelworks. read more

Russian President Vladimir Putin says the “special military operation” is necessary because the United States was using Ukraine to threaten Russia and Moscow had to defend Russian-speakers against persecution.

He says Ukraine and Russia are essentially one country. Ukraine says it is fighting an imperialist land grab by Russia and that Putin’s claims of genocide are nonsense.

Reporting by Reuters; editing by Guy Faulconbridge and Angus MacSwan