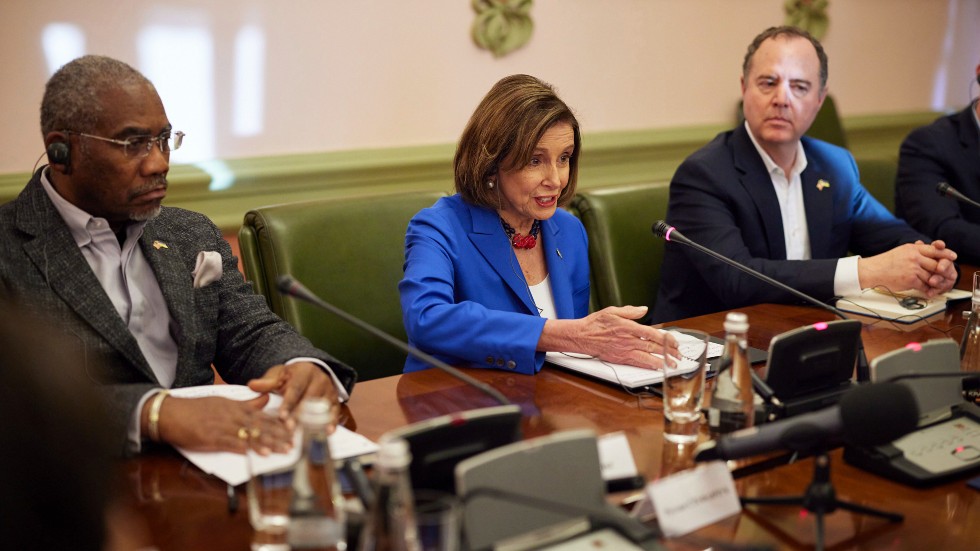 Speaker Nancy Pelosi (D-Calif.) said on Sunday following a meeting with Ukrainian President Volodymyr Zelensky in Kyiv that the U.S. should “not be bullied by bullies” when asked about sending additional aid to Ukraine without provoking a response from Russia.

“Let me speak for myself. &#8230; Do not be bullied by bullies. If they’re making threats, you cannot back down. That’s my view of it,” Pelosi told reporters during a press conference in Poland.

Pelosi added that the purpose of the trip was to “send a clear message to the world: America stands with Ukraine.”

“Stands with Ukraine until the victory is won. And we stand with our NATO allies in supporting Ukraine,” she said.

The Speaker’s office announced early Sunday that Pelosi and other lawmakers visited Kyiv, where the group met with Zelensky. The congressional delegation huddled with the Ukrainian president and his leadership team for three hours discussing sanctions on Russia and how they could be strengthened, weapons and how supplies could be increased, and economic, food and humanitarian assistance.

They are also slated to meet with Polish President Andrzej Duda and other senior officials.

In a statement on Sunday, the delegation said Zelensky thanked the U.S. “for the substantial assistance that we have provided” before making note of Kyiv&#8217;s needs as Russia’s invasion progresses through its third month.

“He conveyed the clear need for continued security, economic and humanitarian assistance from the United States to address the devastating human toll taken on the Ukrainian people by Putin&#8217;s diabolic invasion – and our delegation proudly delivered the message that additional American support is on the way, as we work to transform President Biden’s strong funding request into a legislative package,” the group said.

Meeks, the chairman of the House Foreign Affairs Committee, told reporters on Sunday that Zelensky was “pleased” that Congress had passed a number of bills supporting Ukraine amid the conflict. He specifically pointed to the Ukraine Democracy Defense Lend-Lease Act and the Asset Seizure for Ukraine Reconstruction Act.

Schiff, the chairman of the House Intelligence Committee, said the Russia-Ukraine conflict is “a struggle of freedom against tyranny.”

Kinzinger: Greene calling herself a victim is ‘insane’ Raiders owner says of quarterback Colin Kaepernick: ‘I would welcome him with open arms’

“And in that struggle, Ukraine is on the front lines. The whole freedom-loving world has an interest in the outcome of this war and ensuring that Ukraine is victorious. And we are determined to do everything in our power to make it so,” he added.

Sorgente articolo:
Pelosi after Zelensky meeting: ‘Do not be bullied by bullies’ – The Hill