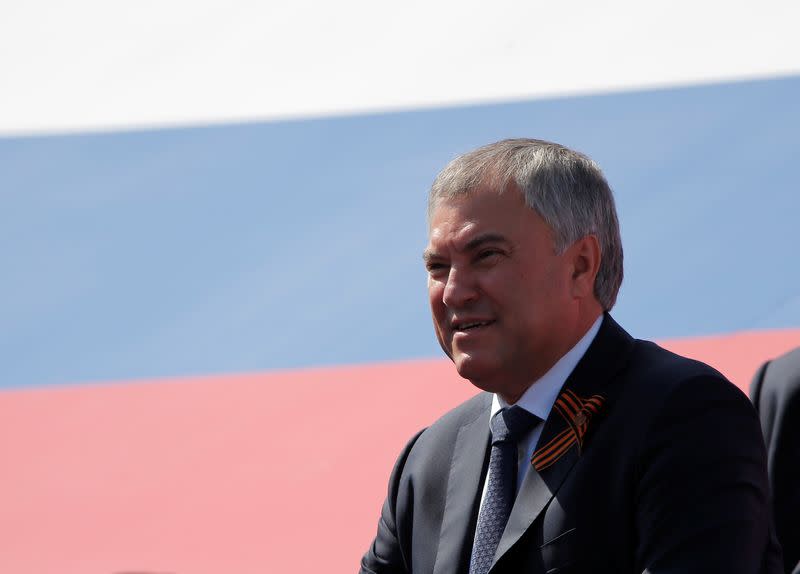 By Guy Faulconbridge and Lidia Kelly

LONDON (Reuters) -Russia should confiscate property owned by Westerners in response to a proposal by U.S. President Joe Biden to transfer the frozen assets of Russia’s elite to Ukraine, Russia’s most senior lawmaker said on Sunday.

Biden on Thursday stepped up support for Ukraine, asking Congress for $33 billion to help Kyiv, and to allow the U.S. state to seize more assets owned by Russian oligarchs and give the proceeds to Ukraine.

Duma Chairman Vyacheslav Volodin said the sumptuous yachts and villas of Russia’s oligarchs had not helped Russian development but that the West appeared to be engaged in simple “theft”.

“It is right to take mirror measures towards businesses in Russia whose owners come from unfriendly countries where such measures were taken: confiscate these assets,” Volodin, who often voices the Kremlin’s views, wrote on his Telegram channel.

“The proceeds from the sale should be used for the development of our country,” he said. “A dangerous precedent has been created: it should hit the ‘States like a boomerang.”

Russia’s Feb. 24 invasion of Ukraine prompted the United States and its allies to impose the most severe sanctions in modern history on Russia and Moscow’s business elite, steps President Vladimir Putin casts as a declaration of economic war.

Putin has repeatedly cautioned that Moscow will respond in kind, though thus far the Kremlin’s toughest economic response has been to cut off gas supplies to Poland and Bulgaria and demand a new payment scheme for European buyers of gas.

After the West imposed sanctions on Russia, the $1.8 trillion economy is heading for the biggest contraction since the years following the 1991 fall of the Soviet Union amid soaring inflation.

A significant transfer of Russian assets has begun, as the Russian state gains even more influence over the economy, many major Western investors – such as energy giants BP and Shell – exit, and oligarchs try to restructure their business empires.

As so many Western owners either sold their Russian stakes or shuttered their businesses, it was not immediately clear which specific assets in Russia could be under threat.

Russia has proposed putting companies that have left Russia into external administration, and Kremlin chief Putin has said Russia will now look eastwards to China and other countries after what he casts as the West’s perfidy.

Volodin singled out Lithuania, Latvia, Poland, and the United States as countries which were engaged in the “theft” of Russian assets.

(Reporting by Reuters; Writing by Lidia Kelly in Melbourne and Guy Faulconbridge in London; Editing by William Mallard, Alexandra Hudson)