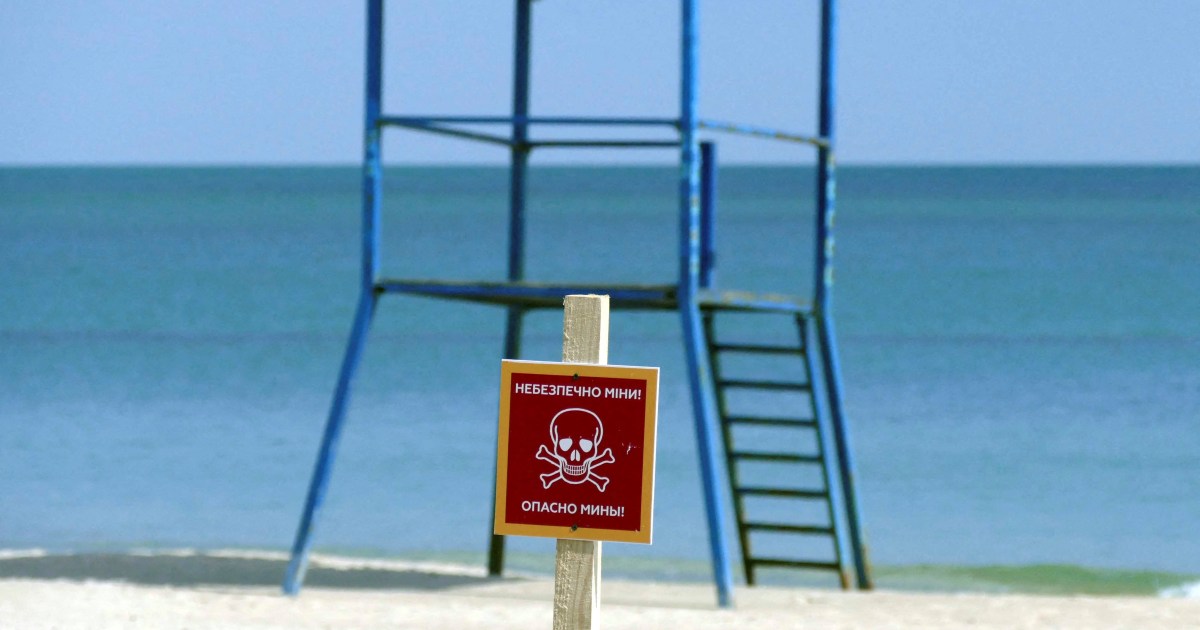 The runway at the main airport in Ukraine’s Odesa has been destroyed in a Russian missile attack, officials said, as Ukrainian forces in the east of the country fought village by village to hold back Moscow’s advance.

In a late-night video address on Saturday, Ukraine’s President Volodymyr Zelenskyy said the newly constructed runway in the strategic Black Sea port had been knocked out, but pledged to rebuild it.

“We will, of course, rebuild it. But Odesa will never forget Russia’s behaviour towards it,” he said.

Regional officials said the missile was launched from the Russian-annexed Crimean Peninsula and said the airport could no longer be used.

Maksym Marchenko, the governor of Odesa region, said Russian forces had used a Bastion missile in the attack.

“Thank God, no one was hurt. Anti-sabotage measures are being carried out in the region,” he said in a video posted online.

Gennadiy Trukhanov, the mayor of Odesa city, said it had taken 10 years to design and build the new runway, which was formally opened last July.

“Thanks to the new runway we were expecting a colossal influx of tourists from all over the world. Instead, we got a rocket strike,” he said on Facebook.

“But Odesa is not a city which surrenders to difficulties. We will absolutely restore the runway after our victory and even more tourists will come to us.”

There was no comment on the attack from Moscow, whose forces have sporadically targeted Odesa, Ukraine’s third-largest city.

Eight people were killed in a Russian attack on the city last week, Ukrainian officials said.

Russia has turned its focus to Ukraine’s south and east after failing to capture the capital, Kyiv, in a nine-week offensive that has flattened cities, killed thousands of civilians and forced more than five million to flee abroad.

Russia’s renewed assault in the south is aimed in part at linking the area with Crimea as it pushes for complete control over Ukraine’s eastern Donbas region. Parts of Donbas’s two provinces, Luhansk and Donetsk, were already controlled by Russian-backed separatists before Moscow’s February 24 invasion.

In his address, Zelenskyy said Russia was “gathering additional forces for new attacks against our military in the east of the country” and “trying to increase pressure in the Donbas”.

Getting a full picture of the unfolding battle in eastern Ukraine has been difficult because air raids and artillery barrages have made it extremely dangerous for reporters to move around.

But Western military analysts suggested that the offensive there was going much slower than planned.

So far, Russian troops and the separatists appeared to have made only minor gains in the month since Moscow said it would focus its military strength in the east. Numerically, Russia’s military manpower vastly exceeds Ukraine’s. In the days before the war began, Western intelligence estimated Russia had positioned near the border as many as 190,000 soldiers; Ukraine’s standing military totals about 200,000, spread throughout the country.

Yet, in part because of the tenacity of the Ukrainian resistance, the United States believes the Russians are “at least several days behind where they wanted to be” as they try to encircle Ukrainian troops in the east, said a senior US defence official who spoke on condition of anonymity to discuss the assessment.

With plenty of firepower still in reserve, Russia’s offensive could still intensify and overrun the Ukrainians.

Overall, the Russian army has an estimated 900,000 active-duty personnel. Russia also has a much larger air force and navy.

The US and its European allies have provided Ukraine with weapons worth billions of dollars as well as humanitarian aid.

US President Joe Biden is seeking a $33bn aid package for Kyiv, including $20bn for weapons, and British Prime Minister Boris Johnson said on Saturday his country would continue “to give the Ukrainians the equipment they need to defend themselves”.

Russia has repeatedly warned the West against continuing military assistance to Kyiv, saying the weapons deliveries were “pouring oil on the flames of the war”.