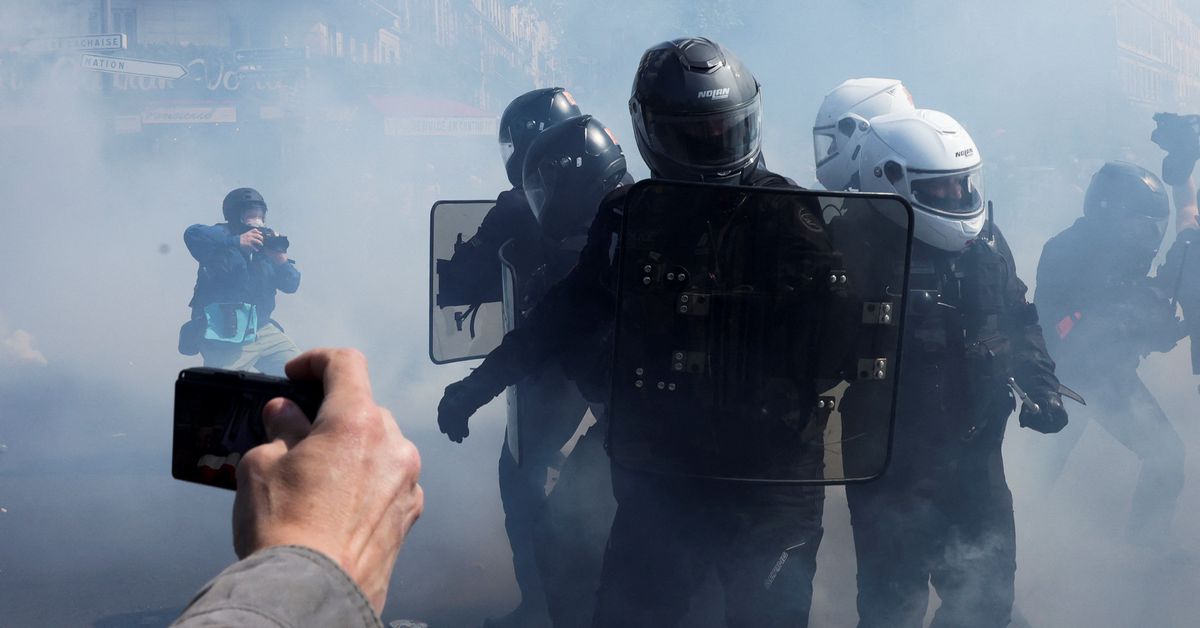 PARIS, May 1 (Reuters) – Police fired tear gas to push back black-clad anarchists who ransacked business premises in Paris on Sunday during May Day protests against the policies of newly re-elected President Emmanuel Macron.

Thousands of people joined May Day marches across France, calling for salary increases and for Macron to drop his plan to raise the retirement age.

Most were peaceful but violence broke out in the capital, where police arrested 45 people, including a woman who attacked a fireman trying to put out a fire, Interior Minister Gerald Darmanin told a news conference. Eight police officers were injured, Darmanin added.

Clashes with police broke out at the start of the march near La Republique Square and when it reached La Nation Square in eastern Paris.

About 250 rallies were organised in Paris and other cities including Lille, Nantes, Toulouse and Marseille.

In the capital, trade unionists were joined by political figures – mostly from the left – and climate activists. In all, more than 20,000 people took part, up from 17,000 last year, the interior minister said.

The cost of living was the main theme in the presidential election campaign and looks set to be equally prominent ahead of June legislative elections that Macron’s party and its allies must win if he is to be able to implement his pro-business policies, including increasing retirement age to 65 for 62

“It is important to show Macron and the whole political world that we are prepared to defend our social rights,” Joshua Antunes, a 19-year-old student said. He also accused the president of “inactivity” on environment issues.

French CRS riot police charge during clashes as part of the traditional May Day labour union march in Paris, France, May 1, 2022. REUTERS/Sarah Meyssonnier

Marchers carried banners reading “Retirement Before Arthritis”, “Retirement at 60, Freeze Prices” and “Macron, Get Out”

“The government has got to deal with the purchasing power problem by raising wages,” Philippe Martinez, the head of the hardline CGT union, told Reuters before the rallies. read more

Far-left leader Jean-Luc Melenchon, who came third in the first round of the presidential vote, attended the Paris march.

He wants to rally a union of the left, including the Greens, to dominate parliament and force Macron into an awkward “cohabitation”, but so far this has not materialised. read more

“We will not make a single concession on pensions,” Melenchon said before the march started.

He said he still hoped an agreement to build a new union of the left could be reached by Sunday evening.

Unlike in previous years, Marine Le Pen did not lay a wreath in Paris at the statue of Joan or Arc, whom her party uses as a nationalist symbol. She was replaced by the Rassemblement National Interim President Jordan Bardella, who said Le Pen was preparing for the legislative elections.

Le Pen urged voters in a video message to elect as many deputies from her party as possible in June so that she could “protect your purchasing power,” and prevent Macron from carrying a “harmful project for France and the French people”

The parliamentary elections will be held on June 12 and 19.