Lavrov made the remarks during an interview with Italian television, in which he claimed Ukrainian President Volodymyr Zelensky’s Jewishness did not undercut Russia’s claims that its invasion of Ukraine was meant to “denazify” the country.

“The aim of such lies is to blame the Jews themselves for the most terrible crimes in history that were committed against them, thus freeing from responsibility the oppressors of Israel,” Prime Minister Naftali Bennett said in a statement from his office.

“This is an unforgivable and scandalous comment, a terrible historical error and we expect an apology,” Lapid said. “The Jews did not murder themselves in the Holocaust. The lowest form of racism against Jews is blaming the Jews themselves for antisemitism.”

Persistent conspiracy theories that Nazi leader Adolf Hitler had some Jewish ancestry that may have motivated his antisemitism and the murder of six million Jews have been repeatedly debunked by historians.

Lapid said Russian Ambassador Anatoly Viktorov would be summoned for “a not-so easy talk.” According to the Foreign Ministry, Viktorov has been called in for a “clarification conversation.”

“A new low for antisemitism was reached this morning,” tweeted Deputy Foreign Minister Idan Roll, who said Lavrov’s remarks were part of a “disturbing trend of disparaging the Holocaust” by Russian leaders amid the invasion of Ukraine. 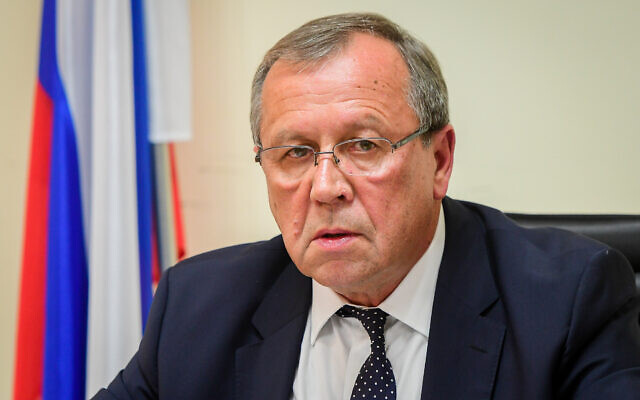 Russian Ambassador to Israel Anatoly Viktorov speaks to the media at the Russian Consulate in Tel Aviv, on March 3, 2022. (Avshalom Sassoni‎‏/Flash90)

Bennett said: “As I’ve already stated, no current war is similar to the Holocaust.” He was echoing previous criticism aimed at Zelensky’s comparison of the Russian invasion to the Holocaust.

“The use of the Holocaust of the Jewish people as a political tool must cease immediately.”

Several other members of the Israeli government condemned Lavrov’s remarks.

Communications Minister Yoaz Hendel called Lavrov’s comments “delusional” and said they were aimed at justifying the “terrible things” that Russia is doing in Ukraine.

“For historical accuracy: Hitler did not have Jewish blood and what is happening in Ukraine is outrageous,” he told Army Radio.

“Denigrating the Holocaust is something that I’m not willing to accept and nothing should be compared to the acts of the Nazis,” he said.

“Hitler did not have ‘Jewish Blood’ and repeating this abhorrent falsehood puts blame for the worst antisemitic crime in history on Jews,” he said in a statement. “Blaming Jews for crimes against Jews is intrinsically antisemitic.” 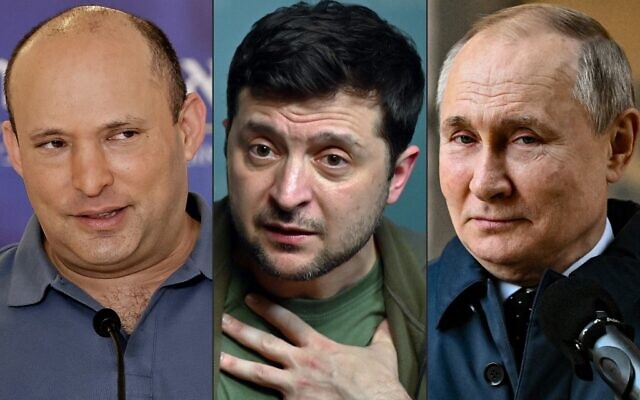 Israel has avoided aligning too closely with either side since Russian troops invaded Ukraine on February 24. It is one of the few countries that maintains relatively warm relations with both Ukraine, a fellow Western democracy, and Russia.

However, the rhetoric coming from Jerusalem shifted in the wake of the reports of widespread civilian killings by the Russians, with Lapid explicitly accusing Russia of war crimes last month. Moscow has also recently publicly criticized Jerusalem, over its decision to supply defensive gear to Kyiv and a suggestion by Israel’s ambassador to Ukraine that streets be renamed in the Ukrainian capital for those who saved Jews during the Holocaust.

Public Security Minister Omer Barlev said Lavrov’s comments “harm the memory” of those murdered by the Nazis. “They also create a dangerous false equivalence that is based on antisemitic lies, in a way that encourages the spread of a false narrative and which may lead to a wave of antisemitism toward Jews across the world, particularly in Russia.”

“A shocking, antisemitic utterance that is completely false. It reflects what the Russian government really is: a violent government that doesn’t hesitate to wipe out its rivals at home, invade a foreign country and falsely accuse it of renewing Nazism,” Golan told Kan public radio.

Lavrov’s comments were also denounced Sunday evening by Israel’s Yad Vashem Holocaust museum as “false, delusional and dangerous, and worthy of all condemnation.” The Holocaust memorial and other groups representing survivors have previously condemned the Russian claim that Ukraine needed to be “denazified,” saying it was “not based on fact, it distorts and trivializes the Holocaust, and we deplore it.”

In the interview, Lavrov also accused the US of torpedoing peace talks between Moscow and Kyiv and accused the Western media of distorted coverage of the war and painting “distorted views of me.”

But he said Zelensky still had the power to end the war if he “stopped giving criminal orders to his Nazi forces.”

Lavrov’s comments came after Zelensky met with US House Speaker Nancy Pelosi in Kyiv and called the meeting a powerful signal of support in a difficult time. The Ukrainian president later said the meeting with Pelosi included discussions of defense supplies to Ukraine, financial support and sanctions against Russia.