Reports from Ukraine Sunday and Monday indicated that a Russian general and some 200 soldiers were killed in an attack launched by Ukrainian forces on Saturday evening in the Russian-controlled city of Izium.

The attack may have been targeting the Russian military chief Gen. Valery Gerasimov, who had left the location just prior to the attack.

A senior Ukrainian official and two US officials confirmed the details to The New York Times.

Russia has not yet confirmed the death of Maj. Gen. Andrei Simonov, who was identified by reports as the general killed in the attack.

According to the Times, Gerasimov visited risky front-line positions in eastern Ukraine last week in an effort to aid Russia’s floundering offensive there. Kyiv learned of his visit and launched the strike on a position he had visited, a school in Izium, but was too late to hit him.

The attack highlighted the precarious state of the Russian military offensive, with Moscow seemingly sending its highest-ranking uniformed officer and a top ally of President Vladimir Putin to a dangerous spot. Gerasimov is credited as being one of the three people — along with Putin and Russian Defense Minister Sergei Shoigu — responsible for plotting the war’s course from the beginning. 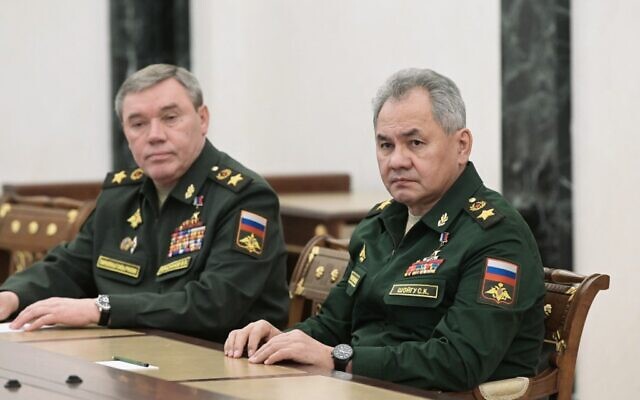 Several Russian generals have been killed since Moscow launched the invasion of February 24, including a top general killed during battle in March during a similar trip to motivate troops.

Western analysts believe Russian forces are facing major logistics and coordination obstacles while under continuous fire from Ukrainian forces. The morale of Russian troops is seen as a problem by some analysts, who have highlighted reports that the tens of thousands who had been deployed for weeks on the border may have only found out they were being sent to war at the last moment.

Izium, which lies 120 kilometers southeast of Kharkhiv, has become a base of operations for Russian forces as they attempt to push deeper into the area known as the Donbas toward the city of Slovyansk. The shift came after a fierce defense by Ukrainian forces thwarted Russia’s attempt to take Ukraine’s capital early in the war. 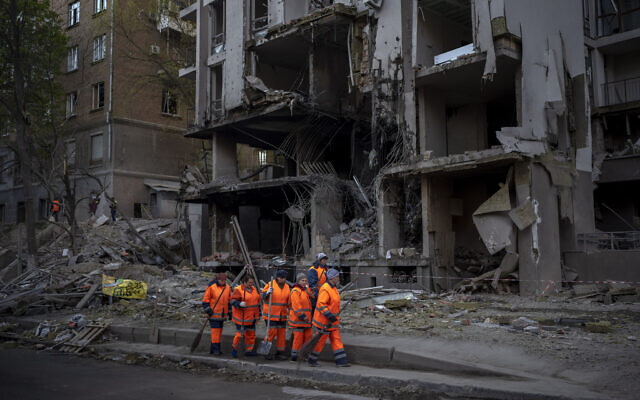 Clean-up crews prepare to work at the site of an explosion in Kyiv, Ukraine on April 29, 2022 (AP Photo/Emilio Morenatti)

Moscow now says its focus is the Donbas, the mostly Russian-speaking industrial region in eastern Ukraine that has been beset by separatist conflict since 2014.

The war has spread devastation around Ukraine, leaving thousands of civilians dead and pushing millions to flee the country. It has pushed up food and energy prices worldwide and upended the post-Cold War security balance in Europe.