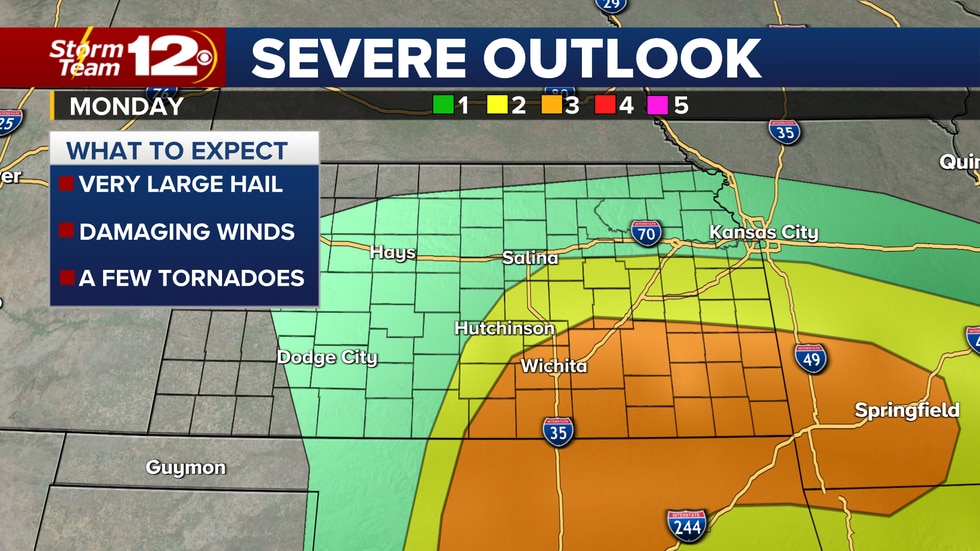 WICHITA, Kan. (KWCH) – Meteorologist Peyton Sanders says that showers and storms are likely tonight and throughout the day on Monday as some storms could turn severe by the afternoon.

Showers and storms will develop in southwest Kansas early tonight with activity spreading east across western Kansas as the night progresses.

Storms will eventually develop across central and eastern Kansas later tonight. The overall threat of severe weather will remain low with this activity.

Scattered showers and storms will continue throughout Monday morning for much of the state before clouds begin to clear out by early afternoon over southwest and portions of south central Kansas.

Where the skies clear, new storms will begin to develop after 2 PM near and just east of Dodge City. This activity will then move east into south central Kansas during the remainder of the afternoon and early evening.

The new storms that develop will be capable of very large hail, damaging winds, and a few tornadoes.

The threat of severe weather will shift into northeast Oklahoma by 10 PM.

Rain amounts of a half-inch to one inch are likely for much of northern, central, and eastern Kansas. Southwest Kansas will get the least amount of rain with this system.

Tomorrow: Showers and storms. Storms during the evening could be severe. Breezy. Wind: SE 10-20; gusty. High: 71