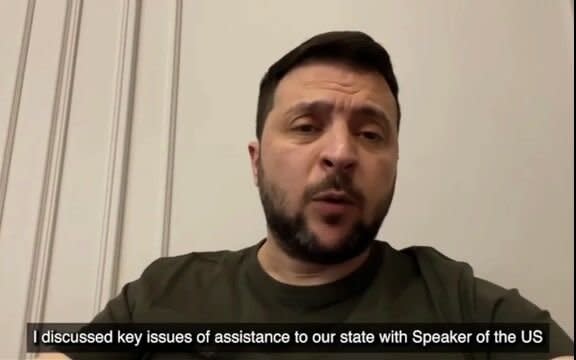 In a press conference following his in-person meeting with House Speaker Nancy Pelosi (D-CA), President Volodymyr Zelenskky gave an overview via closed caption translation of the main topics. Pelosi had led a Congressional delegation on a surprise trip to meet with Zelenskyy in Kyiv to reaffirm U.S. support for the besieged nation.

Zelenskyy described his talks with Pelosi as “substantive” and “multifaceted,” specifically regarding the military aid and financial assistance the U.S. has already provided and for sanction policies against Russia as Ukraine defends itself against Russian aggression.

In addition, the Ukrainian president thanked the U.S. for reviving the World War II-era Lend-Lease program, which will allow the U.S. to lease or lend arms to Ukraine in preparation for a protracted war with Russia. Zelenskyy also expressed gratitude for the U.S. preparing a new aid package of $33 billion. The aid package still requires Congressional approval.

Zelenskyy said he and Pelosi also spoke about ways to strengthen sanctions against Russia that could help prevent Russia’s ability to circumvent current and future sanctions and encourage an end to the war.

“I felt the support of our initiatives,” Zelenskyy said.