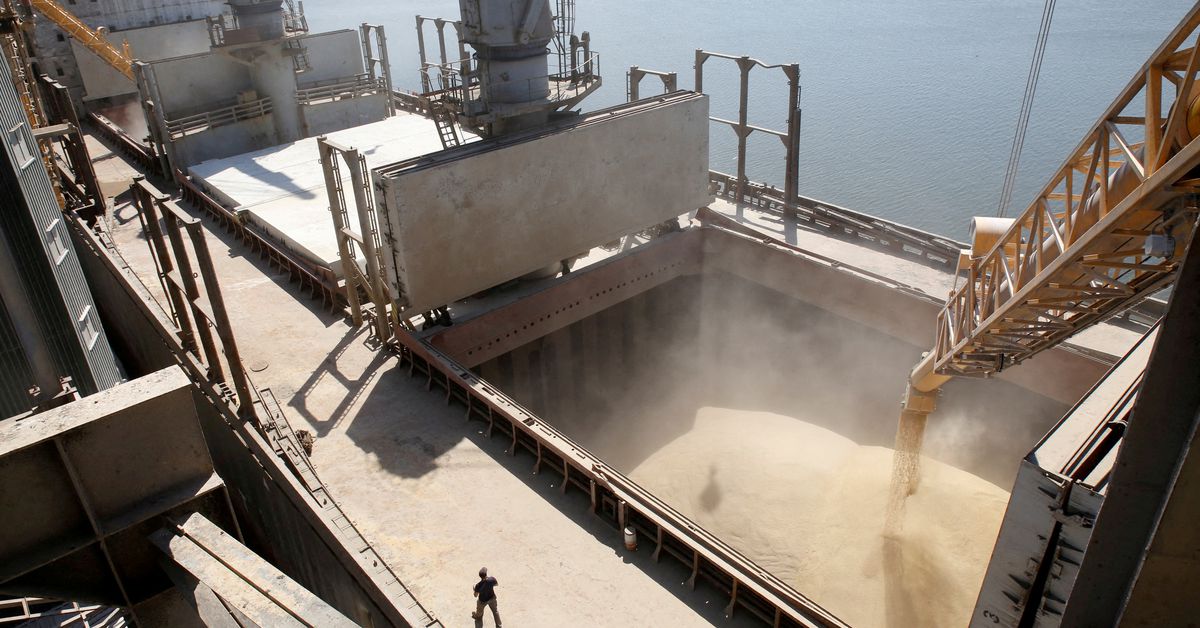 A dockyard worker watches as barley grain is poured into a 40,000 ton ship at a Ukrainian agricultural exporter’s shipment terminal in the southern Ukrainian city of Nikolaev July 9, 2013. REUTERS/Vincent Mundy/File Photo

Ukraine could lose tens of millions of tonnes of grain due to Russia’s blockade of its Black Sea ports, triggering a food crisis that will hit Europe, Asia and Africa, President Volodymyr Zelenskiy said on Monday.

“We are repeatedly receiving reports about targeted Russian attacks on grain silos, fertilizer stores, farming areas and infrastructure,” Oezdemir was quoted as telling the Redaktionsnetzwerk Deutschland, a cooperation network of German regional newspapers.

The suspicion is growing that Russian President Vladimir Putin is seeking “in the long term to remove Ukraine as a competitor”, Oezdemir was quoted as saying.

Russia and Ukraine are traditionally major competitors in global grains markets. Global wheat prices have risen about 40% since Russia’s Feb. 24 invasion of Ukraine cut supplies available on world markets from the Black Sea.

According to International Grains Council data, Ukraine was the world’s fourth-largest grain exporter in the 2020/21 season, selling 44.7 million tonnes abroad. The volume of exports has fallen sharply since the Russian invasion.

“With the increasing hunger in the world, Russia is seeking to build up pressure,” Oezdemir told the network. “At the same time, the massive increase in market prices is coming in handy for Russia because this brings new money into the country.”

Oezdemir said he would raise the question of how Ukraine could be helped to boost its grain exports at a meeting of G7 agriculture ministers in mid-May.

“We must seek alternative transport methods,” he said. “Railway transport could be a method of exporting more grain, although with much effort and with limited capacity.”

Germany would seek to give assistance, he added.

Ukraine has been gradually expanding grain exports using land transport to the European Union. But the different rail track widths in Ukraine and the EU mean Ukrainian trains cannot automatically operate on the European rail network.

Moscow calls its actions a “special military operation” to disarm Ukraine and rid it of anti-Russian nationalism fomented by the West. Ukraine and the West say Russia launched an unprovoked war of aggression that threatens to spiral into a much wider conflict. read more