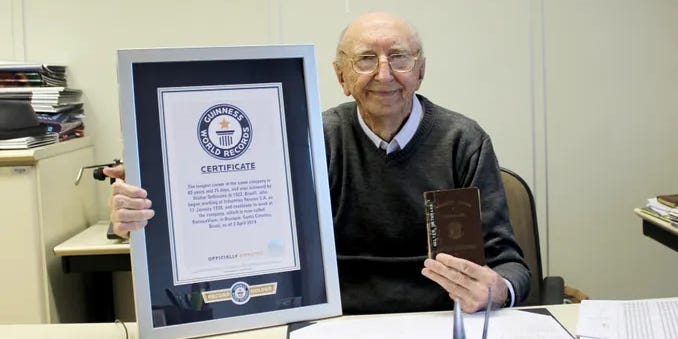 Many people work at multiple companies throughout their careers, rather than just one.

Not Walter Orthmann. The 100-year-old in Brazil has broken the record for the longest tenure at a single company, according to a press release last week from Guinness World Records. He’s worked at one firm for 84 years and 9 days, as of January 6, when Guinness verified the record.

Orthmann started working as a shipping assistant at textile company Industrias Renaux S.A., now known as ReneauxView, in January 1938, according to the press release. He was 15 years old at the time and took the job to help support his family as they faced financial problems.

“Back in 1938, kids were expected to work to help support the family,” he said, per the press release. “As the oldest son of five, my mother took me to find a job at the age of 14.”

Orthmann was later promoted to a role in sales and, ultimately, to a sales manager position.

He still goes to the office each day and celebrated his 100th birthday with family, friends, and coworkers last month.

After all these decades, he says his best career advice is to find a good employer and follow your passions.

With the Guinness recognition, Orthmann is breaking his own previous record for the longest career at the same company. In 2018, he was recognized for having worked 80 years at ReneauxView.

Looking back on his life so far, Orthmann says he considers the record his “proudest achievement” despite “never having contemplated breaking a record.”

“I don’t do much planning, nor care much about tomorrow,” he said. “All I care about is that tomorrow will be another day in which I will wake up, get up, exercise and go to work; you need to get busy with the present, not the past or the future. Here and now is what counts.”