Double-masking does not stop people from catching or spreading Covid — and it might even raise their risk, a study suggests.

US health chiefs have been advising Americans to double-up if they can’t get their hands on a medical-grade mask since early 2021, claiming it increases protection.

But now researchers say wearing two masks may actually do the opposite, by creating ‘a false sense of security’ that causes people to take unnecessary risk.

Wearing two cloth masks can also force more air through the gaps between the face, increasing the amount of virus breathed into the air, they found.

The study, which used computer simulation models, looked at cloth masks so the findings do not necessarily apply to surgical masks or N95s used in hospitals.

However, the researchers noted that wearing two tight-fitting masks could cause ‘breathing difficulties’.

The Centers for Disease Control and Prevention (CDC) recommends wearing a cloth mask on top of a surgical mask to achieve a ‘better fit and extra protection’. 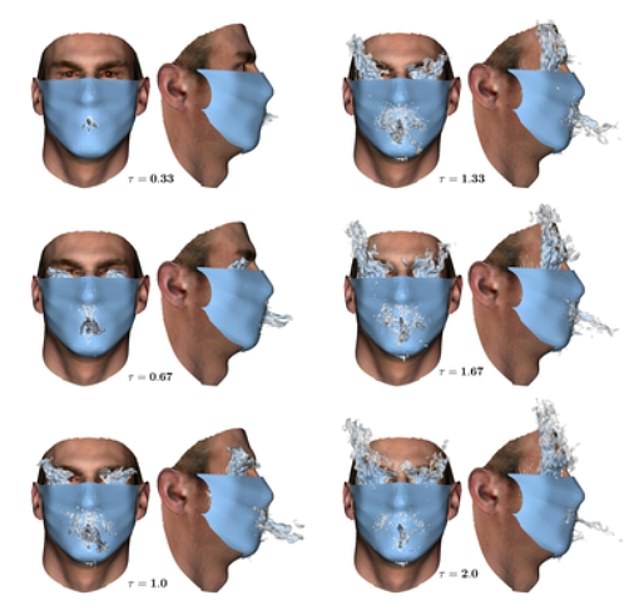 A team of US researchers, who measured airflow through and around masks, found double-masking does not improve how well they work and ‘produces a false sense of security’. Pictured: Time evolution of cough while wearing a face mask

Experts from Florida State University and Johns Hopkins University made computer simulations of 3D heads based on 100 men and 100 women.

The researchers simulated a cough jet from the mouth of the models, which wore a cloth mask over the nose and mouth and elastic hoops wrapped around the ears.

The team calculated the filtration efficiency, which measures how much virus-filled droplets are captured or blocked by the mask.

The findings, published in the journal Physics of Fluids, show wearing two face coverings provide ‘negligible, if any, increase in protection’.

Two masks ‘might not significantly improve’ the protection against breathing out virus particles.

However, they said while it could ‘theoretically’ reduce the amount of virus that could pass through the mask, if two good-fitting face coverings are worn, it ‘could also lead to breathing difficulties’.

A second poor-fitting masks decreases the amount of air that can be filtered through the covering — forcing more air through any gaps between the mask and face.

They said people could also have a ‘false sense of security when choosing to double mask’, and therefore be less likely to social distance or take other precautions.

Double masking has become ‘more and more popular’ for Americans who cannot access the most effective N95 and KN95 masks, the researchers said, which makes the findings important.

They said one cloth mask would be better than two, but the best type of mask is one that fits tightly like an N95 or KN95.

UK health chiefs have previously said there is ‘insufficient evidence’ to recommend double-masking.

Covid is mainly spread through droplets an infected person releases when they breathe, speak, cough or sneeze.

Large particles can land in the nose or mouth of people nearby, while smaller airborne droplets stay suspended in the air can be breathed in.

Evidence shows that, when worn correctly, masks can reduce the spread of these particles — but by how much is still contested.

They are a versatile fashion accessory and a staple in every woman’s wardrobe.

But now researchers say wearing ladies tights on your face could slash your risk of getting Covid.

One of the criticisms aimed at commonly worn face coverings is that they do not fit tightly enough to significantly block viral particles from being inhaled or exhaled.

As part of a new study, Cambridge University experts reviewed a variety of DIY hacks people have used to make masks fit better, including using rubber bands or tape.

Curiously, they found the most effective tactic was to wrap pantyhose around the bottom half of the face — on top of a mask.

This, the scientists said, could reduce the amount of viral particles by up to seven times more than a loose mask on its own, by sealing the gaps around the nose and mouth.

But recognising the social and physical implications of wearing tights on your face in public, they noted it was ‘unlikely to be tolerated for extended periods of time’.

The jury is still out on how effective mask-wearing is at reducing Covid infections at a population level, with conflicting results from both sides. Most scientists agree that they at least make a small contribution.

Tight-fitting medical grade masks, such as KN95s, are exceptional at blocking out the virus but they are often described as uncomfortable and are harder to acquire.

The most common surgical or cloth masks are far less resistant.