Israeli officials are set to discuss expanding aid to Ukraine, including supplies of defensive military equipment so far withheld by Jerusalem, according to a report Tuesday.

Since Russia invaded Ukraine on February 24, Israel has rejected requests from Kyiv and the West for military equipment such as anti-missile batteries, and only recently agreed to send helmets and flak jackets to civilian rescue and medical forces, part of a policy meant to preserve ties with Russia. Instead it has sent some 100 tons of humanitarian aid and set up a field hospital in western Ukraine for six weeks.

However, Israeli officials are now expected to support sending Ukraine military aid, albeit at symbolic levels, and still with hopes of keeping its relationship with Russia intact, Haaretz reported Tuesday, citing officials with knowledge of the matter.

According to a diplomatic official, Israel will not consider sending offensive arms or advanced defensive technology, such as the Iron Dome anti-missile system, but will attempt to find equipment that can be donated without sparking a crisis with Moscow.

“There’s still no plan to provide offensive weaponry, but only defensive arms,” the source was quoted as saying.

The report came as ties between Israel and Russia have frayed following a claim by Kremlin Foreign Minister Sergey Lavrov that Adolf Hitler had Jewish heritage, in an attempt to explain Moscow’s attempts to “denazify” Ukraine, whose president, Volodymyr Zelensky, is Jewish. 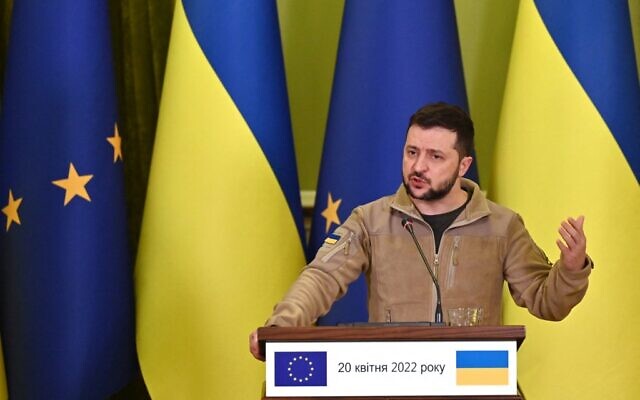 Ukraine’s President Volodymyr Zelensky gestures as he speaks during a press conference following his talks with President of the European Council in Kyiv on April 20, 2022. (Photo by Sergei SUPINSKY / AFP)

Israel summoned Russia’s ambassador for a clarification, and Foreign Minister Yair Lapid said the comments had “crossed a line,” though its unclear if the row will have wider diplomatic implications or play into decision-making when officials meet to discuss expanding aid in the coming days.

The report did not say when the meeting would take place or who would be present.

Jerusalem in recent weeks has appeared to shift slightly away from its balanced approach, agreeing to send helmets and flak jackets to emergency workers in Ukraine and explicitly accusing Russia of war crimes as scenes of atrocities have emerged in towns and cities across the country.

Sending defensive arms would mark a sea change in Israel’s approach to the war, though it would stop well short of the tanks, guns, planes and ammunition sent by the Europeans and Americans. The report described the planned aid shipment as symbolic.

The move is being driven both by pressure from the US and other Western allies, which want Israel to back up its condemnations with actions, and by concerns that Israel’s reluctance to more fully back Ukraine could hurt defense exports if countries fear Jerusalem will do the same to them in a time of need. 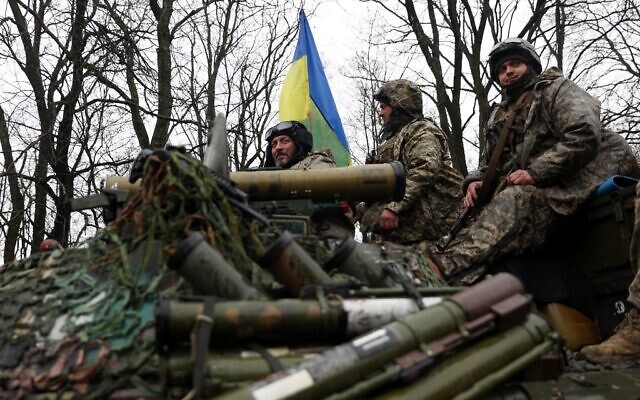 Ukrainian soldiers stand on their armored personnel carrier (APC), not far from the front-line with Russian troops, in Izyum district, Kharkiv region on April 18, 2022, during the Russian invasion of Ukraine. (Anatolii Stepanov / AFP)

Europe was the largest purchaser of Israeli defense goods, buying 41 percent of total exports, followed by the Asia-Pacific region at 34% and North America at 12%.

Zelensky and other Ukrainian officials have specifically mentioned Iron Dome as the top of their wish list for Israeli defensive equipment.

“Everybody knows that your missile defense systems are the best,” he told the Knesset in March. “You can definitely help our people, save the lives of Ukrainians, of Ukrainian Jews.”