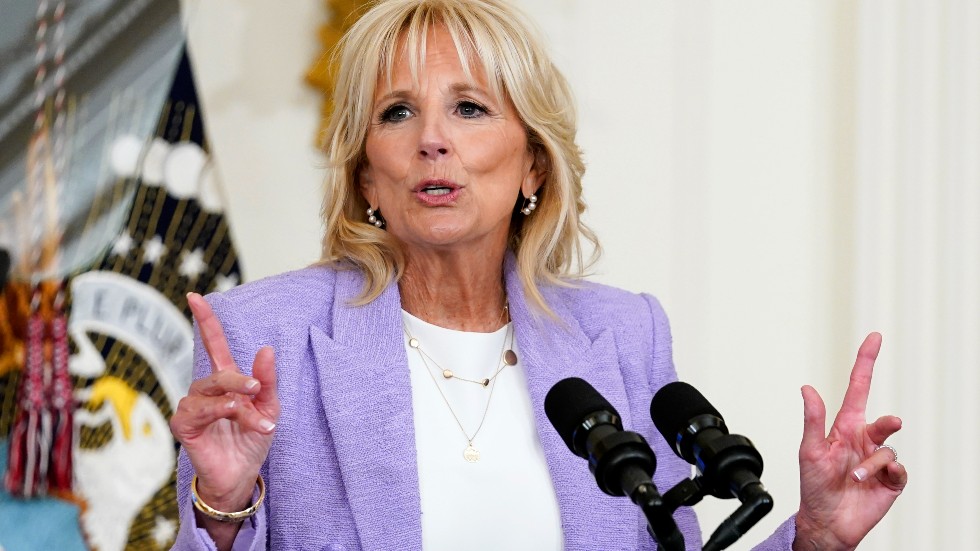 Jill Biden is traveling to Romania and Slovakia Thursday to visit with displaced Ukrainians, a consequential trip for the first lady that mirrors President Biden’s visit with Ukrainian refugees in Poland, a pinnacle moment that fueled his outrage at Vladimir Putin.

Her visit to Eastern Europe over Mother’s Day weekend will include meetings with U.S. troops, and government officials. She will also see Ukrainian mothers and children who have left their homes, adding to a long history of first ladies meeting with those forced to flee during times of war and international crises.

“Dr. Biden very much has a public image as a concerned mother herself and a mother who’s known tragedy herself,” said Katherine Jellison, a professor of U.S. women’s and gender history at Ohio University. “This may be a very important moment for her in her career as first lady to be, as her husband is often times called, the consoler-in-chief.”&nbsp;

In March, the president got a firsthand look at the humanitarian crisis caused by the Russia-Ukraine war, meeting with scores of Ukrainian men, women and children in Poland who fled violence from Russia as it destroyed cities and targeted civilian shelters. Biden told reporters at the time he was struck by the “depth and strength of the human spirit.”

Vice President Harris first met with refugees displaced by the war during her own trip to Warsaw weeks before the president’s visit. The U.S. has pledged to accept up to 100,000 Ukrainian refugees and will provide $1 billion in support for European nations handling an influx of individuals fleeing the Russian invasion.&nbsp;

“[Jill Biden’s] role there will have political impact,” said Katherine Sibley, director of American Studies Program at St. Joseph’s University. “It’s not just the support and nurturing aspect of the first lady, but also the soft power, the enhancement of a power of the presidency that is being seen here.”

“The president is grateful for her willingness to do this and for the important role she’ll play in representing the United States during her visit to Europe and through these meetings,” Psaki said on Monday.

Jill Biden’s position as stepmother to the late Beau Biden will also mean the classifications that come with that — military mother and one who lost a child — will be on display.

“She will be a very consoling figure, someone who they will see immediately has sympathy and empathy with their situation. And she’s very good in that kind of role,” Jellison said.

Biden’s first stop will be for a meeting with U.S. military service members on Friday at Mihail Kogălniceanu airbase in Romania.  She then will travel to Bucharest and on Saturday will meet with members of the government of Romania, U.S. Embassy staff, humanitarian aid workers and educators who are helping teach displaced Ukrainian children.

Biden is a longtime educator and has made her mark as the only first lady to hold a job outside the White House as a teacher at Northern Virginia Community College.

Jellison said that professional background likely means Biden will lend sympathy and empathy because “she recognizes that kids will have their education disrupted and how disorienting that would be as well as other disruptions.”

Biden will mark Mother&#8217;s Day on Sunday with travel to Košice and Vyšné Nemecké, Slovakia to meet with refugees, humanitarian aid workers, and local Slovakians who are supporting displaced families. On Monday, she will meet with members of the government of Slovakia before returning home to Washington.

A first lady’s meetings with refugees are steeped in history and rooted in the human response to decades of international conflicts.

In 1979, former first lady Rosalynn Carter famously called a trip to the Thai-Camodian border “emotionally overwhelming” after she met with malnourished women and newly orphaned children following the Vietnam War.

Other former first ladies who have made significant trips include Eleanor Roosevelt, who met with displaced Jews in 1946 after U.S. troops liberated Nazi concentration camps, Laura Bush, who visited with Burmese refugees in Thailand in 2008, and Michelle Obama, who visited with school girls, many of whom were children of refugees, in London in 2009.

While the foreign policy impacts of Biden’s visit remain to be seen, Sibley said it’s a reflection of the “soft power that first ladies have” in looking out for women and children escaping conflict.

“It has international impacts, it has obviously a broad humanitarian impact,” Sibley said.&nbsp; “We really see here that she is carrying out some of her own interests and she’s also promoting the interests of the administration, but we can see they are all complementary, which is quite striking.”