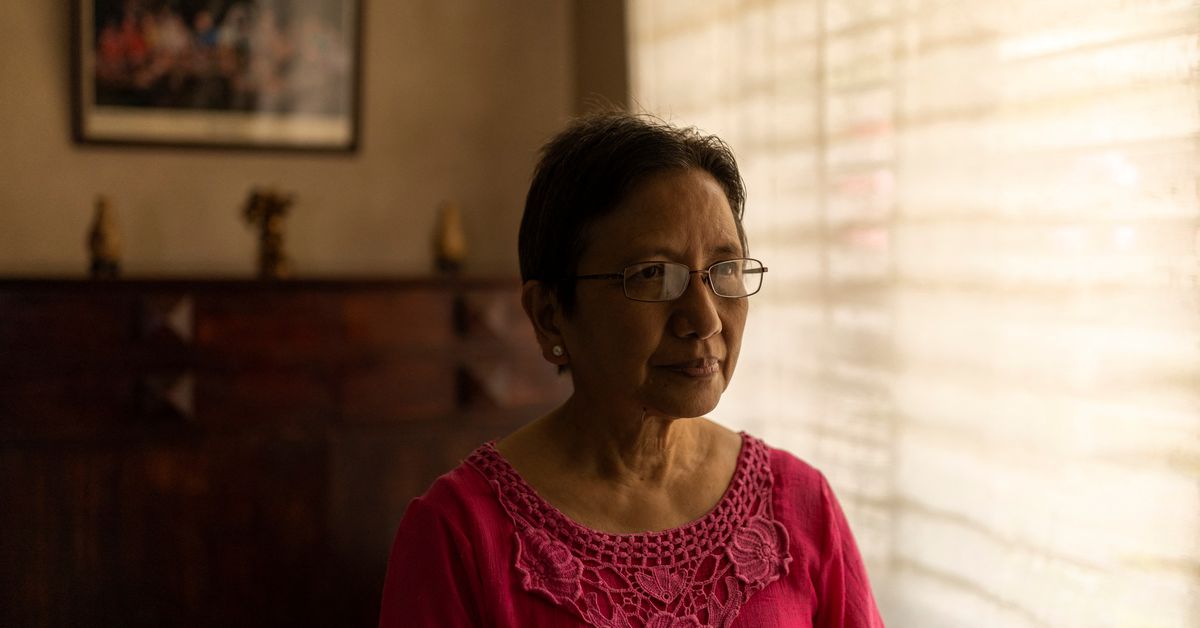 MANILA, May 5 (Reuters) – Former political prisoner Cristina Bawagan still has the dress she wore the day she was arrested, tortured and sexually abused by soldiers during the late Philippines’ dictator Ferdinand Marcos’s brutal era of martial law.

Bawagan fears the horrors of Marcos’s rule would be diminished if his namesake son wins the presidency in next week’s election, a victory that would cap a three-decade political fightback for a family driven out in a 1986 “people power” uprising.

Also known as “Bongbong”, Marcos Jr. has benefited from what some political analysts describe as a decades-long public relations effort to alter perceptions of his family, accused of living lavishly at the helm of one of Asia’s most notorious kleptocracies. read more

Rivals of the family say the presidential run is an attempt to rewrite history, and change a narrative of corruption and authoritarianism associated with his father’s era.

“This election is not just a fight for elected positions. It is also a fight against disinformation, fake news, and historical revisionism,” Leni Robredo, Marcos’s main rival in the presidential race, told supporters in March.

TSEK.PH, a fact-checking initiative for the May 9 vote, told Reuters last month it has debunked scores of martial law-related disinformation it says were used to rehabilitate, erase or burnish the discreditable record of Marcos Snr.

Marcos Jr.’s camp did not reply to written requests for comment from Reuters on Bawagan’s story.

Marcos Jr., who last week called his late father a “political genius”, has previously denied claims of spreading misinformation and his spokesperson has said Marcos does not engage in negative campaigning. read more

Bawagan, 67, said martial law victims like her needed to share their stories to counter the portrayal of the elder Marcos’s regime as a peaceful, golden age for the Southeast Asian country.

“It is very important they see primary evidence that it really happened,” said Bawagan while showing the printed dress which had a tear below the neckline where her torturer passed a blade across her chest and fondled her breasts.

The elder Marcos ruled for two decades from 1965, almost half of it under martial law.

During that time, 70,000 people were imprisoned, 34,000 were tortured, and 3,240 were killed, according to figures from Amnesty International – figures which Marcos Jr. questioned in a January interview. read more

Bawagan, an activist, was arrested on May 27, 1981 by soldiers in the province of Nueva Ecija for alleged subversion and brought to a “safehouse” where she was beaten as they tried to extract a confession from her.

“I would receive slaps on my face every time they were not satisfied with my answers and that was all the time,” Bawagan said. “They hit strongly at my thighs and clapped my ears. They tore my duster (dress) and fondled my breasts.”

“The hardest thing was when they put an object in my vagina. That was the worst part of it and all throughout I was screaming. No one seemed to hear,” said Bawagan, a mother of two.

In a conversation with Marcos Jr. that appeared on YouTube in 2018, Juan Ponce Enrile, who served as the late dictator’s defence minister, said not one person was arrested for their political and religious views, or for criticising the elder Marcos.

However, more than 11,000 victims of state brutality during martial law later received reparations using millions from Marcos’s Swiss bank deposits, part of billions the family siphoned off from the country’s coffers and recovered by the Philippine government. read more Among them was Felix Dalisay, who was detained for 17 months from August 1973 after he was beaten and tortured by soldiers trying to force him to inform on other activists, causing him to suffer hearing loss.

“They kicked me even before I boarded the military jeep so I fell and hit my face on the ground,” Dalisay said, showing a scar on his right eye as he recounted the day he was arrested.

When they reached the military headquarters, Dalisay said he was brought to an interrogation room, where soldiers repeatedly clapped his ears, kicked and hit him, sometimes with a butt of a rifle, during questioning.

“They started by inserting bullets used in a .45 calibre gun between my fingers and they would squeeze my hand. That really hurt. If they were not satisfied with my answers, they would hit me,” Dalisay pointing to different parts of his body.

The return of a Marcos to the country’s seat of power is unthinkable for Dalisay, who turned 70 this month.

“Our blood is boiling at that thought,” said Dalisay. “Marcos Sr declared martial law then they will say nobody was arrested, and tortured? We are here speaking while we are still alive.”

Sorgente articolo:
‘Our blood is boiling’: Victims angry as son of dictator closes in on Philippine presidency – Reuters