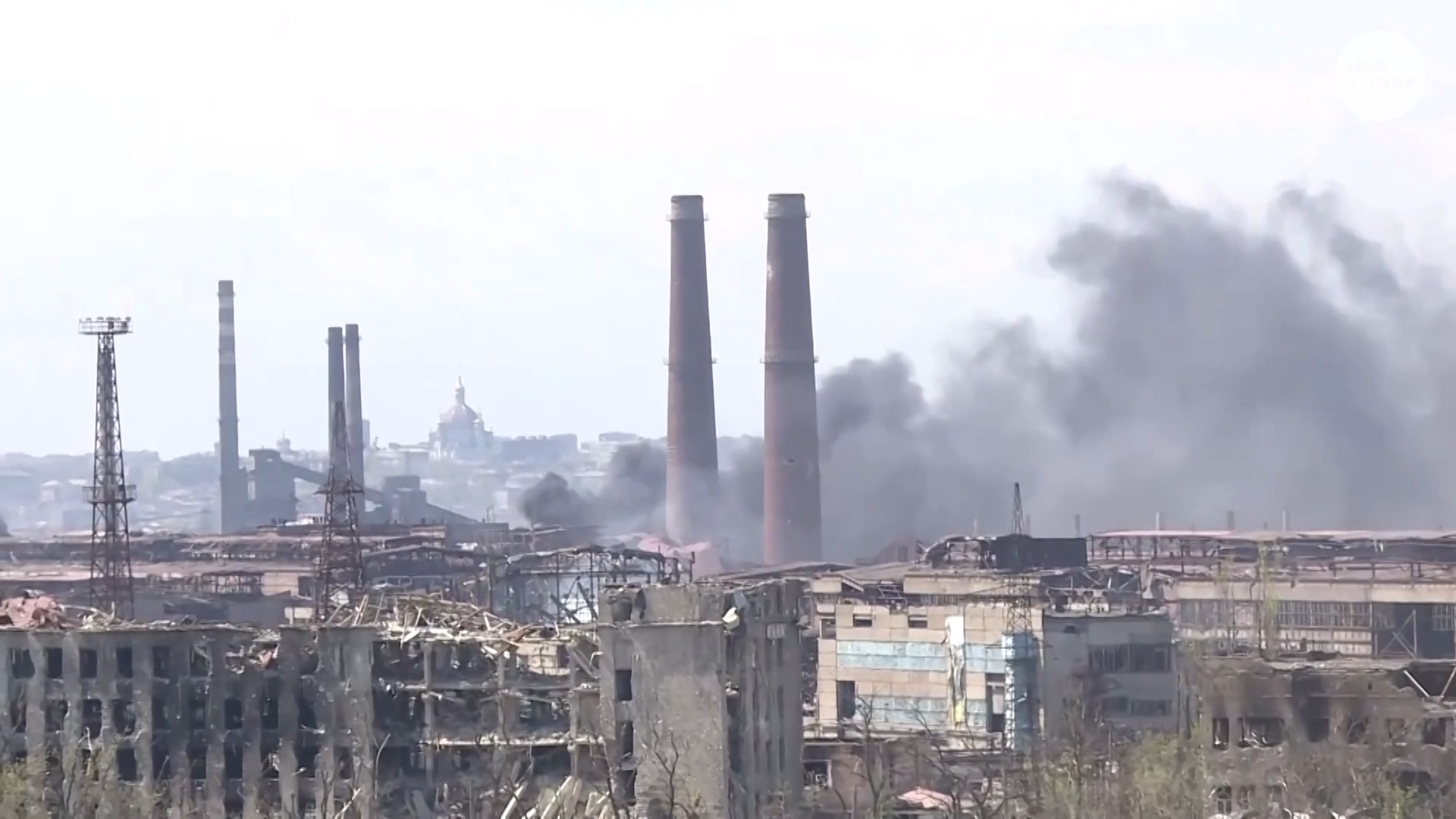 The Ukrainian city of Mariupol is still under siege by Russian forces as civilians still remained trapped at the Azovstal steel plant.

A Ukraine military officer leading the last holdouts in rocket-battered Mariupol pleaded for help evacuating civilians and wounded soldiers as the Russian invasion roared into its 11th week with no end to the carnage in sight.

Capt. Sviatoslav Palamar, deputy commander of Ukraine’s Azov Regiment, said in a video statement Thursday from the bunkers of a sprawling steel mill that the “wounded soldiers are dying in agony” due to the lack of medical care.

“We call on the world community to evacuate civilians, and I personally appeal to (Ukraine President Volodymyr Zelenskyy),” Palamar said, adding that bodies of the dead should be removed so that “Ukrainians can say goodbye to their heroes.”

Earlier, Zelenskyy said more than 340 civilians had been evacuated from the steel plant serving as the last stand for his military in the city. Elsewhere, Ukrainian forces claimed gains in some territory in the south while repelling Russian attacks in the hotly contested Donbas region.

“Due to the successful actions of Ukrainian defenders, Russian enemy lost control over several settlements on the border of Mykolayiv and Kherson regions,” the Ukraine military said Thursday in its daily war update. “Eleven enemy attacks were repulsed in Donetsk and Luhansk oblasts over the past 24 hours.”

Donetsk and Luhansk are home to separatists and were recognized as republics by Russia days before it invaded Ukraine.

USA TODAY ON TELEGRAM: Join our Russia-Ukraine war channel to receive updates straight to your phone

►The U.N. food aid agency is appealing for Black Sea ports in Ukraine, blasted by Russian missiles and artillery, to be opened to permit shipping of wheat and corn exports, which many poor nations depend on. Corn and wheat prices have ballooned since the war began.

►Zelenskyy launched global initiative United24, including a fundraising platform for making one-click donations from anywhere in the world in support of Ukraine.

►Belarus President Alexander Lukashenko, who has expressed support for Russia in the war and whose country has been used as a staging ground for Russian troops, said he hadn’t expected the Russian offensive to “drag on this way.”

Russian President Vladimir Putin apologized to Israeli Prime Minister Naftali Bennett on Thursday for offensive remarks made by a top Kremlin official, according to an Israeli readout of a phone call between the two leaders.

The Russian account of the call did not mention any apology over the remarks, made by Russian Foreign Minister Sergey Lavrov to an  Italian TV station Sunday, including saying that Nazi leader Adolf Hitler “had Jewish blood.” Lavrov was arguing that Russia’s invasion of Ukraine is meant to “de-Nazify” the country even though its president is Jewish.

“For some time we have heard from the Jewish people that the biggest anti-Semites were Jewish,” Lavrov added, speaking to the station in Russian.

The comments incensed the Israelis, who called it “unforgivable and outrageous” and demanded an apology.

Israel’s readout of the meeting between Bennett and Putin says, “The Prime Minister accepted President Putin’s apology for Lavrov’s remarks and thanked him for clarifying the President’s attitude towards the Jewish people and the memory of the Holocaust.”

The Russian readout says they talked about “the situation in Ukraine” but makes no mention of Lavrov’s remarks or an apology.

Some more residents are being allowed to flee from the bombarded Ukrainian city of Mariupol and its surroundings through a new “safe passage operation,” the United Nations said. Humanitarian spokesman Saviano Abreu told The Associated Press the organization is coordinating the evacuation with the warring parties and the International Committee of the Red Cross.

It is not clear how many people are part of the evacuation and Abreu would not say whether anyone at the Azovstal steel plant is involved. A similar joint evacuation effort allowed 101 civilians to leave the plant over the weekend. Another one brought out more than 340 people from Mariupol and communities around it Wednesday.

As the price of some food items around the world surges due to difficulty of obtaining Ukrainian grain, authorities in the country accused Russian invaders of stealing grain and farm equipment. Ukraine’s deputy agriculture minister, Taras Vysotskiy, claimed “several hundred thousand tons of grain in total were taken out of the Zaporizhzhya, Kherson, Donetsk and Luhansk regions.”

Emine Dzheppar, first deputy minister of Foreign Affairs, put the total amount of grain stolen by Russia at 400,000 tons, or about one-third of all reserves in the region.

“They force farmers to transfer agricultural machinery to ‘collective farms’ ownership, just like it was in the USSR,” Dzheppar tweeted. “Those who refuse to cooperate are threatened with physical violence and confiscation of grain and equipment.”

All Russian ammunition was banned from import into the U.S. as of Sept. 7, 2021. But the cheap 7.62 x 39 mm bullets – favored by many Americans for target practice with semiautomatic rifles – have kept flowing because of a State Department loophole allowing existing and pending import permits to stand. Russian brands such as Wolf, TulAmmo and Barnaul are easy to find at gun shops and U.S.-based online retailers.

The Biden administration announced the ban in August 2021 in reaction to the poisoning of Russian opposition leader Alexei Navalny the year before. The ban also came as intelligence agencies reported Russia amassing 100,000 troops at the Ukrainian border.

The sanctions and the grandfathered Russian imports have split the top firearm lobbies and gun owners: Some take a hardline Second Amendment view, some fall on the side of democratic support for Ukraine, some seem to be torn between the two. Read more here

Authorities in Fiji executed a U.S. warrant “freezing” a superyacht valued at over $300 million allegedly owned by a Russian oligarch, the U.S. Justice Department announced Thursday. A judge in Fiji permitted seizure of the 348-foot-long Amadea pending legal challenges from oligarch Suleiman Kerimov, sanctioned for alleged money laundering. The seizure was coordinated through the Justice Department’s KleptoCapture, a task force dedicated to enforcing the sweeping sanctions and economic countermeasures imposed in response to Russia’s invasion of Ukraine.

Pro-Russian blogger Anatoly Shariy, accused of treason by his home country of Ukraine, was detained in Spain before being freed on bond. Ukraine’s security services announced the arrest Thursday and said there was reason to believe Shariy “was acting on behalf of foreign entities.” Shariy, a frequent critic of Ukraine’s government, tweeted Tuesday that “my only crime is that I have exposed you thieves too little.”

“This detention is another testimony to the fact that every traitor of Ukraine will sooner or later receive the deserved punishment,” the Ukraine agency said in a social media post. “It is irreversible.”

The Ukrainian city of Kherson is showing signs that Russia could be in control for the long term. The Russian currency is being introduced and reports are mounting that a sham referendum would be held to legitimize Russian annexation, some locals say. Military checkpoints are everywhere.

Kherson, a southern city of about 280,000 and home to ship-building industry on the Dnieper River, became the first major Ukrainian city to fall to Russian forces on March 2. Since then, Russia’s actions to cement control and warnings from U.S. and Ukrainian officials of possible annexation plans have ramped up fear and uncertainty in the strategic provincial capital.

After weeks under Russian occupation, Tetiana Danets decided it was time to flee Kherson. “If we don’t go now … we go never,” Danets, 22, told USA TODAY by phone on Monday from Romania, just over two weeks after she fled by car. Read more here.

Belarus said it started military exercises Wednesday, insisting it has no plans to threaten any neighbors. Russia used Belarus as a staging ground in its invasion, and the U.S. government warned citizens not to travel to Belarus and closed its embassy there due to its involvement in the invasion. The military exercises would assess the readiness and capability of the country’s armed forces, and the military’s ability to operate on “unknown terrain in a rapidly changing situation,” the Belarusian Defense Ministry said.

It said the maneuvers “do not threaten the European community in general and any neighboring countries in particular.”