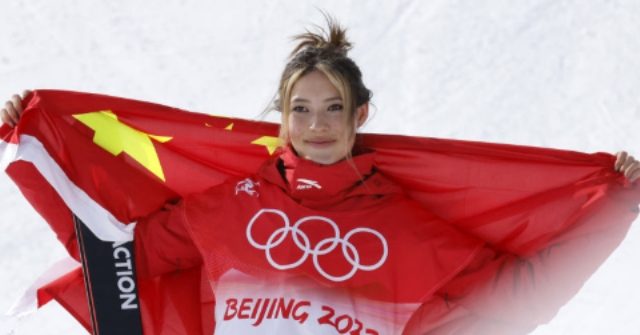 NBC morning show, Today happily offered a puff interview to Eileen Gu, the American teen who defected to China to compete in the Olympics, giving her another opportunity to wave away China’s horrific record of human rights abuses.

Gu, also known as “Genocide Barbie,” appeared on the Wednesday morning edition of the show and sat prim and peppy as she told host Hoda Kotb that “there’s no wrong or right” when Kotb hinted that people feel she is representing a nation that is committing genocide, torturing prisoners, jailing Christians, and enslaving entire populations.

Of course, Kotb didn’t come right out and accuse China of anything, leaving the viewer to catch what she was inferring. But, even worse, Kotb just sat there and willingly let this teenage turncoat say that there is “no wrong or right” about genocide.

After asking Gu if she needs a “thick skin” for the criticism she has faced, this vacuous opportunist replied, “Absolutely, I mean people always have their own opinions. But, for me what I try to stick to is that I know, there’s no wrong or right. There’s only intention and I’m trying to make the world a better place in my own way.”

So, China’s act of murdering millions of people because they don’t conform to China’s communist ideal is not wrong or right? Is it just an opinion? And Gu proudly standing up as a representative of that regime is somehow merely an effort to “make the world a better place?” And Hoda Ktob had nothing to say to that conceit?

Newsbusters’ Curtis Houck took to his Twitter account to blast NBC for giving this young Olympian an excuse to wave off China’s crimes against humanity as just her work to “make the world a better place.”

Later, NBC’s Hoda Kotb lamented Eileen Gu faced “backlash” for choosing to compete for China instead of the U.S. at the #WinterOlympics.

She then allowed Gu to dismiss China’s record b/c she wanted to “us[e] sport as a force of communication” to introduce Chinese people to snow pic.twitter.com/PZTXTtwGVa

China’s Eileen Gu on NBC: “If people disagree with [her picking China ], that’s okay & I just encourage them to make the world better in their way, right? We can approach this situations from different standpoints.”