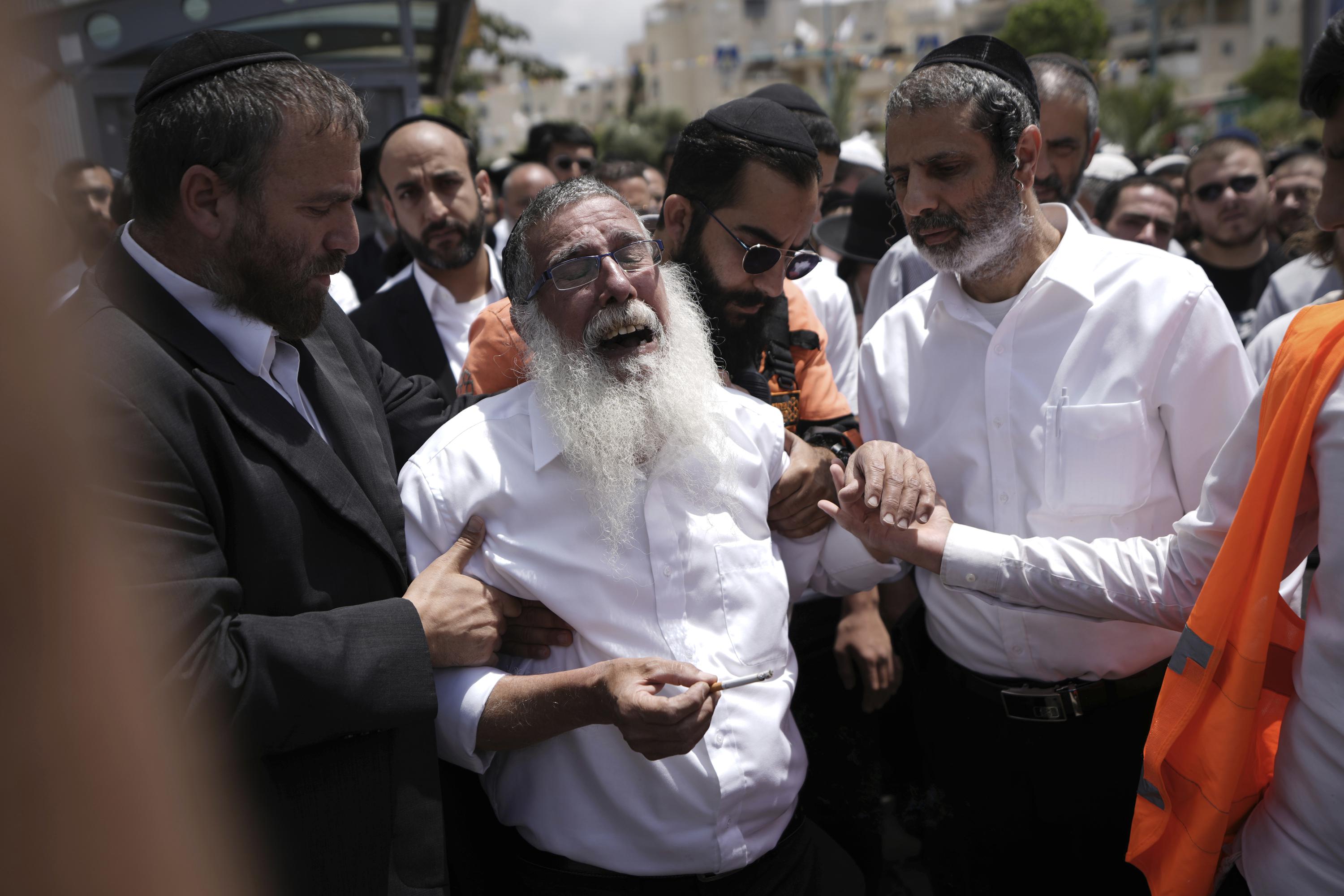 The stabbing on Thursday, Israel’s Independence Day, was the latest in a series of deadly assaults deep inside the country in recent weeks. It came as Israeli-Palestinian tensions were already heightened by violence at a major holy site in Jerusalem sacred to Jews and Muslims.

Police said they were searching for two suspects, 19 and 20 years old, from the town of Jenin in the occupied West Bank, which has re-emerged as a militant bastion in the latest wave of violence — the worst Israel has seen in years. Several attackers have come from in or around Jenin, and Israeli forces have launched arrest raids that have ignited gunbattles there.

“We will get our hands on the terrorists and their supportive environment, and they will pay the price,” Israeli Prime Minister Naftali Bennett said after huddling with senior security officials late Thursday. Authorities said the attackers fled in a vehicle.

Medics described a horrific scene in Elad, an ultra-Orthodox town near Tel Aviv. In addition to the three killed, four others were wounded, one of them critically.

Israeli media identified those killed as Yonatan Havakuk, Boaz Gol and Oren Ben Yiftah, three fathers in their 30s and 40s who together are survived by 16 children.

Ben Yiftah, 35 years old and the father of six, was from the central city of Lod. The city’s mayor, Yair Revivo, said “our heart breaks into tiny pieces” in a Facebook post, calling it a “great tragedy.”

Defense Minister Benny Gantz extended a closure on the West Bank, imposed ahead of the holiday to prevent Palestinians from entering Israel, to remain in effect until Sunday.

“The killing of Palestinian and Israeli civilians leads only to more deterioration at a time when all of us try to achieve stability and prevent escalation,” the official Wafa news agency quoted him as saying.

The Palestinian militant group Hamas, which rules the Gaza Strip, praised the attack and linked it to violence at the Jerusalem holy site.

“The storming of Al-Aqsa Mosque can’t go unpunished,” Hamas spokesman Hazem Qassem said. “The heroic operation in Tel Aviv is a practical translation of what the resistance had warned against.”

The Al-Aqsa Mosque compound is the third holiest site in Islam and is built on a hilltop that is the holiest site for Jews, who refer to it as the Temple Mount. It lies at the emotional heart of the conflict, and Palestinians and Israeli police have clashed there repeatedly in recent weeks.

Under informal arrangements known as the status quo, Jews are allowed to visit the site but not pray there. In recent years, they have visited in ever-increasing numbers with police escorts and many have discreetly prayed, angering the Palestinians as well as neighboring Jordan, which is the custodian of the site. The Palestinians have long feared that Israel plans to eventually take over the site or partition it.

Israel says it is committed to maintaining the status quo, and accuses Hamas of inciting the recent violence.

At least 18 Israelis have been killed in five attacks since March, including another stabbing rampage in southern Israel, two shootings in the Tel Aviv area, and a shooting last weekend in a West Bank settlement.

Nearly 30 Palestinians have died in violence — most of whom had carried out attacks or were involved in confrontations with Israeli forces in the West Bank. But an unarmed woman and two apparent bystanders were also among those killed, and rights groups say Israel often uses excessive force.

Israel and Hamas fought an 11-day war a year ago, fueled in large part by similar unrest in Jerusalem.

Israel captured the West Bank, Gaza and east Jerusalem — which includes Al-Aqsa and other major religious sites sacred to Jews, Christians and Muslims — in the 1967 Mideast war. The Palestinians want all three territories to form their future state. The last serious peace talks collapsed more than a decade ago.