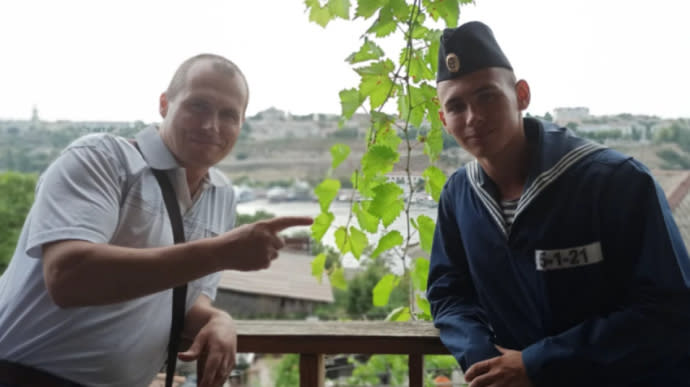 ROMAN PETRENKO – FRIDAY, 6 MAY 2022, 09:54 Dmytro Shkrebets, the father of conscript Yehor Shkrebets, who served on the “Moskva” cruiser and was declared missing, published a reply from the prosecutor’s office stating that the ship had not taken part in the war against Ukraine. Source: Shkrebets on his VK page Shkrebets’ quote: “Is Zmiinyi Island not the territorial waters of Ukraine, scoundrels? What a creep should have sent it to us!” Details: The letter states that Shkrebets was officially “declared missing in the military unit,” and the search allegedly failed. It is also noted that the cruiser “Moskva” allegedly was not in the territorial waters of Ukraine and “was not included in the list of military units involved in the special military operation.” Reference: Dmytro Shkrebets wrote on social media that Ukraine “should not exist,” was happy because of the war and shelling of Ukrainian cities, praised Putin, and when he lost his son – changed his rhetoric and began to criticise the government. Users of “VKontakte” write that their relatives who were members of crew of the cruiser “Moskva” disappeared after the flagship of the fleet of the Russian Federation had sunk. Background: In the evening of 13 April, it was reported that the Ukrainian anti-ship missile “Neptune” had struck the missile cruiser “Moskva”, the flagship of the Black Sea Fleet of the Russian Federation. Following this, the cruiser with 16 cruise missiles was disabled and sank. Experts analysed satellite images showing the location of ships through the clouds in the atmosphere, and determined the exact coordinates of the location of the cruiser “Moskva” at the time of being hit by Ukrainian missiles “Neptune”. “Radio Svoboda” has been able to talk to a relative of one of the Russian sailors on the deck of “Moskva”, and she confirmed his death on the cruiser. The woman admitted to reporters that another 27 crew members had “disappeared”. Russian media published allegedly “fresh” video meetings between the commander-in-chief of the Russian Navy, Admiral Nikolai Yevmenov, and the command of the Russian Black Sea Fleet with the “crew of the ‘Moskva’ missile cruiser”, which had been hit and sunk by a Ukrainian missile. Naval expert H I Sutton estimated from satellite images and Russian official video that half the crew of the Russian cruiser “Moskva” was dead or wounded.

Sorgente articolo:
Russia replied to the father of a conscript from “Moskva”: the ship did not take part in the war, they dont know where the son is – Yahoo News