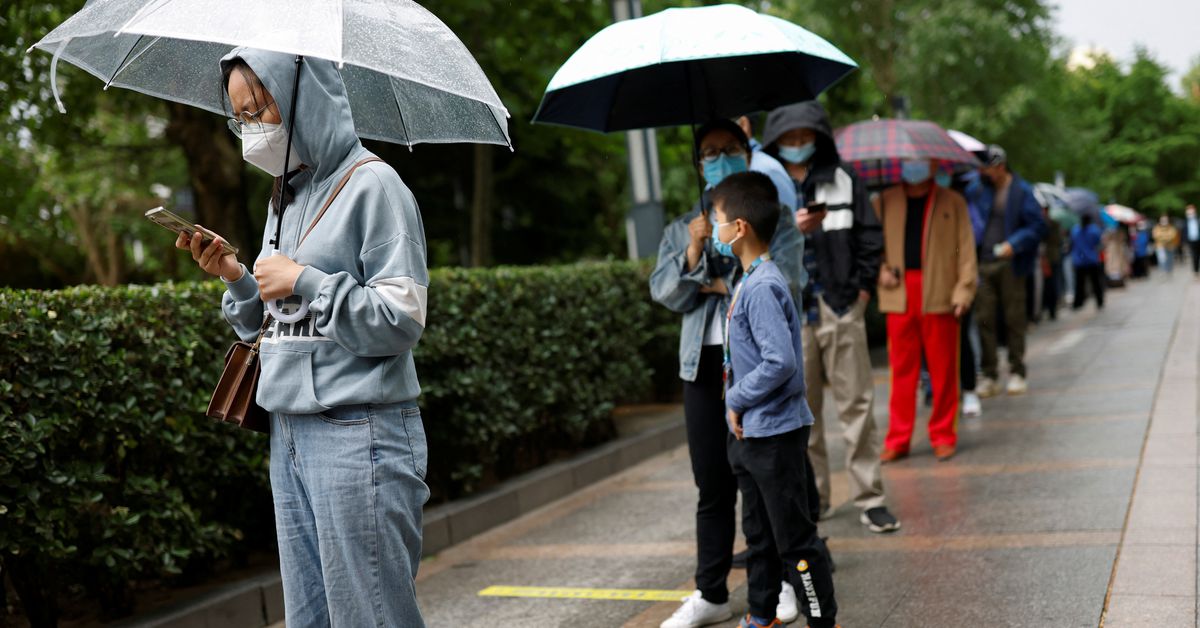 BEIJING/SHANGHAI, May 6 (Reuters) – Beijing residents fretted on Friday over tightening COVID curbs in its biggest district and dozens of new cases reported daily as China’s leaders reiterated their resolve to battle the virus and threatened action against critics of their strict measures.

Incurring a heavy economic cost and facing rare public criticism on its tightly-policed internet, China is increasingly out of step with the rest of the world where COVID restrictions are being abandoned and vaccines relied on to protect people.

In the latest ratcheting up of restrictions, Beijing authorities on Friday said all non-essential services in its biggest district Chaoyang, home to embassies and large offices, would shut. Mass testing will also resume in at least four districts over the weekend.

Meanwhile, organisers of the Asian Games, scheduled to take place in September in Hangzhou, southwest Shanghai, postponed them until 2023, because of COVID, defying a global sporting calendar that has largely returned to normal. read more

The Chinese capital is racing to avoid an explosion in cases like the one that forced the commercial hub of Shanghai into an almost complete lockdown for more than a month, taking a financial and psychological toll on its residents.

“We will try to cooperate,” said 42-year-old Beijing finance worker Hu, giving only her surname.

“But I also hope that the government can introduce some policies that will not affect the overall life of citizens. After all, we all have mortgages and car loans.”

After a meeting of the highest decision-making body, the Standing Committee of the Communist Party’s politburo, state media reported late on Thursday that China would fight any comment or action that distorted, doubted or repudiated its COVID policy. read more

Relaxing COVID controls, which are in place in dozens of cities across the world’s second-largest economy and affecting hundreds of millions of people, would lead to large-scale infections, it warned.

On Friday, the Communist Party’s official People’s Daily newspaper hit out in an editorial against accusations China’s COVID policy was disrupting the global economy and trade.

“Some U.S. politicians have frequently attacked and smeared China’s epidemic prevention and control measures and tried to throw the blame on China for the so-called disruption of global supply chains,” it said without identifying anyone.

China was putting “life first”, and although pressure on its economy has increased, it could overcome difficulties, it said.

People line up to get tested at a mobile nucleic acid testing site, amid the coronavirus disease (COVID-19) outbreak in Beijing, China May 6, 2022. REUTERS/Carlos Garcia Rawlins

China’s yuan weakened to its lowest level against the dollar since November 2020, while stocks (.CSI300), (.SSEC) slumped. Iron ore prices also fell on fears about the impact of the restrictions on demand from China, the world’s top consumer of the steel-making ingredient.

The government and central bank have promised more policy support for the economy. read more

Shanghai vice-mayor Wu Qing said “the epidemic has come under effective control” but warned of risks of a rebound and promised the city would not deviate from a zero-COVID strategy, which involves mass testing, mandatory quarantine and sweeping lockdowns. read more

“We cannot relax, we cannot slack off: persistence is victory,” he said.

Despite the announcement that the outbreak was under control, most of the city’s 25 million people are unable to leave their housing compounds or are allowed out only briefly.

One large, central residential complex announced on Friday that it was relaxing curbs within the compound and scaling back the number of volunteers helping to deliver food. But its residents could still not get out through its locked gates.

The capital has reported dozens of new cases a day for about two weeks since its outbreak emerged, faring better than Shanghai was on the 14th day of its outbreak.

But getting around the city is cumbersome with weekly COVID tests now needed to get into offices and public venues and take subways or buses, the state-backed Beijing Daily reported.

Some residents complained they never received test results on a mobile app that tracks their COVID tests, while others were inexplicably prompted by the app to re-take theirs.

“I couldn’t enter the office building … even though I tested negative within 24 hours. Isn’t that insane?” said a resident surnamed Wang.

Goldman Sachs analysts said regular testing could be a compromise to allow cities to identify and isolate cases quickly with much lower costs than city-wide lockdowns.

It “would not be a panacea, but would help limit disruption to a large part of China’s manufacturing and overall economic activity for a protracted period”, they said.

Reporting by the Beijing and Shanghai bureaus; Writing by Marius Zaharia and John Geddie; Editing by Simon Cameron-Moore, William Maclean