Syrian state media reported explosions on Saturday morning in the Deir Ezzor region in the east of the country.

The SANA report said the blasts were caused by airstrikes and targeted an area surrounding a bridge.

There were no immediate reports of casualties and the alleged strikes were not attributed to any country.

As a rule, Israel’s military does not comment on specific strikes in Syria, but has acknowledged conducting hundreds of sorties against Iran-backed groups attempting to gain a foothold in the country. It says it also attacks arms shipments believed to be bound for those groups.

Thousands of Iran-backed militiamen are deployed in different parts of Syria, with many of them in areas along the border with Iraq, including the region surrounding Deir Ezzor.

Last month, Israel was alleged to have carried out strikes in Syria on three separate occasions, also including a daytime strike. 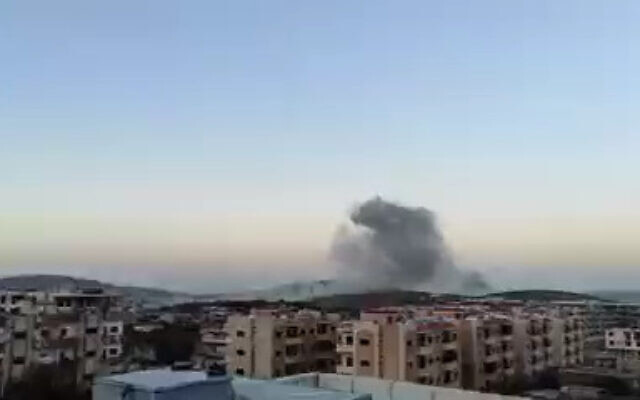 A cloud of smoke rises after an alleged airstrike near the Syrian city of Masyaf, on April 9, 2022. (Screenshot/Twitter)

In the most recent of the raids on April 27, four Syrian soldiers were killed and three were hurt in a strike near the capital Damascus, Syria’s state media said.

The official claimed most of the Israeli missiles were shot down and that the Syrian military was looking into the “results of the aggression.”

After the alleged daytime attack last month, local media reported explosions near the town of Masyaf, which is thought to be used as a base for Iranian forces and pro-Iranian militias and has been repeatedly targeted in recent years in attacks attributed to Israel.

The Israeli strikes have continued in Syrian airspace, which is largely controlled by Russia, even since Moscow began its invasion of Ukraine. 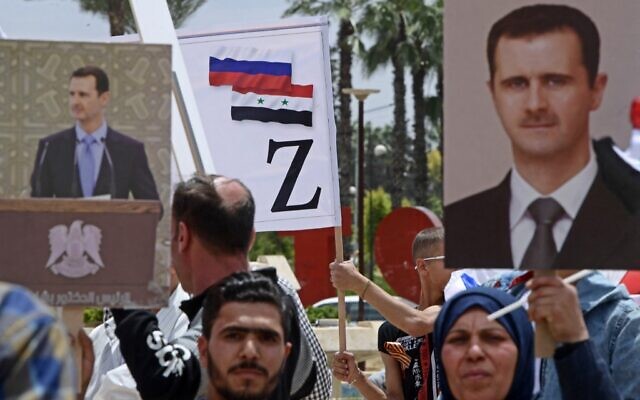 Supporters of Russia rally to commemorate the Soviet Union victory over the Nazis during World War II, at Saadallah al-Jabri square in Syria’s northern city of Aleppo, on May 5, 2022. (AFP)

Israel has found itself at odds with Russia as it has increasingly supported Ukraine, while seeking to maintain freedom of movement in Syria’s skies.