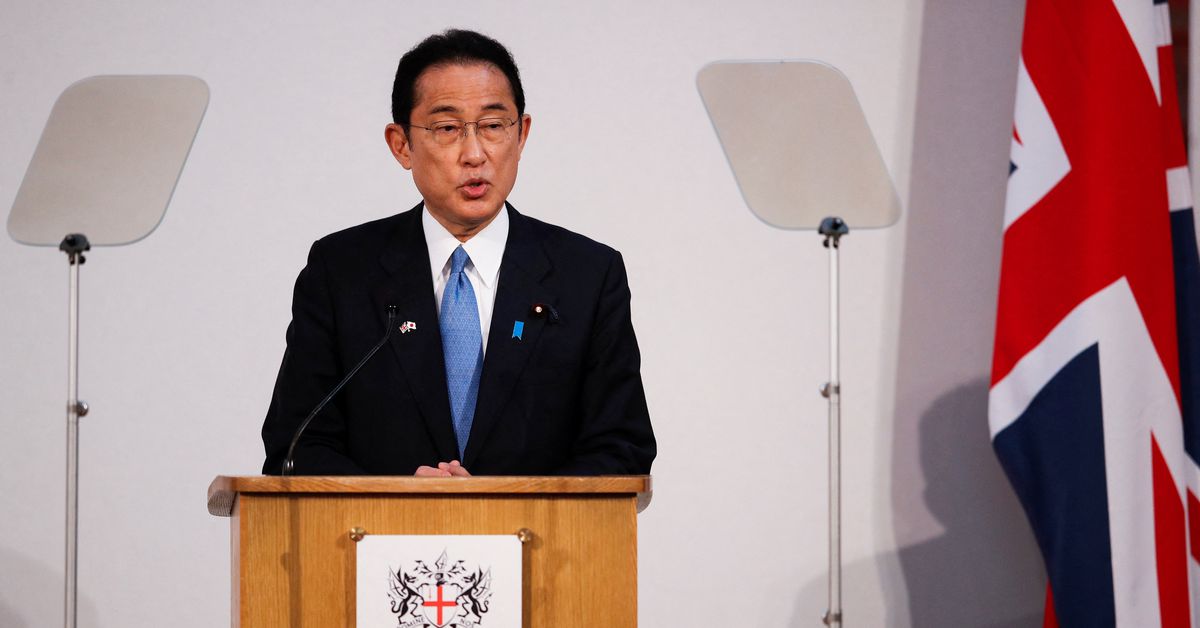 LONDON, May 6 (Reuters) – Japanese Prime Minister Fumio Kishida warned on Thursday that the invasion of Ukraine could be replicated in East Asia if leading powers do not respond as one, saying peace and stability in the Taiwan Strait must be maintained.

Kishida, speaking in London via a translator after a meeting with British Prime Minister Boris Johnson, said now was the time for the Group of Seven leading nations to solidify its unity.

“Collaboration among countries sharing universal values becomes ever more vital,” he said. “We must collaborate with our allies and like minded countries, and never tolerate a unilateral attempt to change the status quo by the use of force in the Indo Pacific, especially in East Asia.”

“Ukraine may be East Asia tomorrow.”

Taiwan, claimed by China as its own territory, has raised its alert level since Russia invaded Ukraine, wary of the possibility Beijing might make a similar move on the island, though it has reported no signs this is about to happen.

“Peace and stability in the Taiwan Strait is critical not only for Japan’s security but also for the stability of international society,” Kishida said.

“Japan maintains its position to expect a peaceful resolution through dialogue to issues surrounding Taiwan. And the situation will be watched carefully from that perspective.”

Asked about Kishida’s comments, China’s foreign ministry accused Japan on Friday of exaggerating a perceived threat from Beijing as an excuse to boost its own military might.

“If Japan really wants peace and stability in East Asia, it should immediately stop provoking confrontation between big powers and do more to help increase the trust between regional countries and promote regional peace and stability,” ministry spokesman Zhao Lijian told a regular briefing in Beijing.

Taiwan’s Foreign Ministry thanked Kishida for his comments on peace and stability in the Taiwan Strait, saying they “not only reflect the aspirations of democratic countries, but also win the recognition and approval of the international community”.

Kishida said the G7 must show there are consequences to Russia’s violence in Ukraine, and said around 140 other people would be added to a Russian asset freeze list while an export ban would be expanded to Russian military firms.

Kishida arrived in London after an extended visit to Southeast Asia where he had hoped to consolidate responses to Russia’s invasion after only one nation there, Singapore, joined sanctions against Moscow, officials said. read more