Prime Minister Naftali Bennett vowed to establish a civilian national guard in his opening remarks at the weekly cabinet meeting on Sunday.

Bennett announced that the National Security Council, in coordination with the Public Security Ministry, would present a proposal for the new force by the end of the month.

The announcement came in the wake of a terror attack in which three people were killed and several were wounded in the ultra-Orthodox city of Elad on Thursday.

After a massive 60-hour manhunt, on Sunday a joint statement from the Israel Defense Forces, Shin Bet security agency and Israel Police announced the arrests of As’ad Yousef As’ad al-Rifa’i, 19, and Subhi Emad Subhi Abu Shqeir, 20, in a hideout not far from the scene of the attack.

Israel is not the only country to establish a civil guard in a time of crisis. In 2016, while facing a deadly wave of terror attacks, then-French president Francois Hollande also ordered the establishment of a national guard.

Tensions have risen sharply between Israel and the Palestinians in recent months against the backdrop of a spate of terror attacks in Israel and the West Bank that have left 19 people dead. 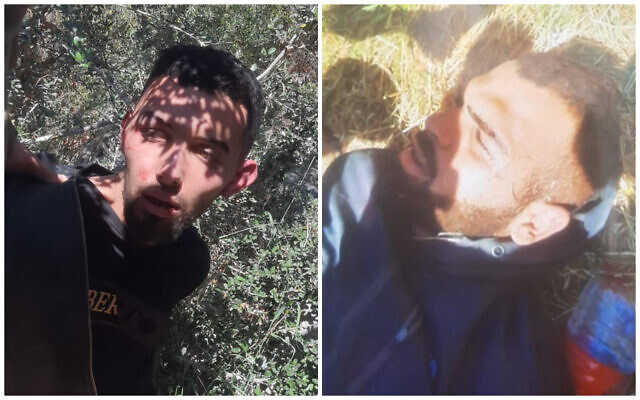 Subhi Emad Subhi Abu Shqeir, left, and As’ad Yousef As’ad al-Rifa’i, from a West Bank town near Jenin, the alleged Palestinian perpetrators of the Elad terror attack on May 5, 2022 in which three Israelis were killed and several seriously wounded. (Courtesy)

The Israeli army has stepped up its West Bank activities in an attempt to crack down on the spiraling violence. The ensuing raids sparked clashes that left at least 27 Palestinians dead since mid-March.

At the same time, tensions at the Temple Mount in Jerusalem in recent weeks have led to violent clashes, rising pressure from Israel’s allies, and threats from Hamas terrorists.

In his comments to the cabinet on Sunday, Bennett promised that Israel would continue to treat all religions with respect in the capital, while retaining sole sovereignty.

“All decisions relating to the Temple Mount in Jerusalem will be made by the Israeli government, the sovereign of the city, without any thought to foreign considerations,” he said.