Israeli officials relayed to the Biden administration that if the government fails to advance plans to build nearly 4,000 settlement homes in the West Bank, the coalition will fall apart, Channel 12 News reported on Saturday.

According to the report, the officials conveyed that the coalition — which is already teetering following the exit of former whip Idit Silman — needed to meet its commitments to right-wing parties and voters in the wide coalition headed by Prime Minister Naftali Bennett, and that should it fail to do so, the government would fall.

The Biden administration warned Friday that the plan to build settlement homes “deeply damages the prospects for a two-state solution.”

Earlier that day, the Defense Ministry body that authorizes settlement construction released the agenda for its meeting next Thursday, revealing that it is slated to green-light 2,536 homes through the final planning stage, while advancing another 1,452 homes through an earlier stage in the permitting process known as deposit.

Over the past several years, Israel has approved new batches of settlements on a quarterly basis, though gaps between meetings of the Higher Planning Subcommittee have sometimes extended longer during sensitive diplomatic periods. The committee operates under the Defense Ministry’s Civil Administration, which administers West Bank construction in areas under full Israeli civilian control.

According to Channel 12, the initial plan was for a total of 5,800 homes, reduced to 4,000 following discussions with American officials. Israel has also promised 1,000 housing units for Palestinians, according to the report. 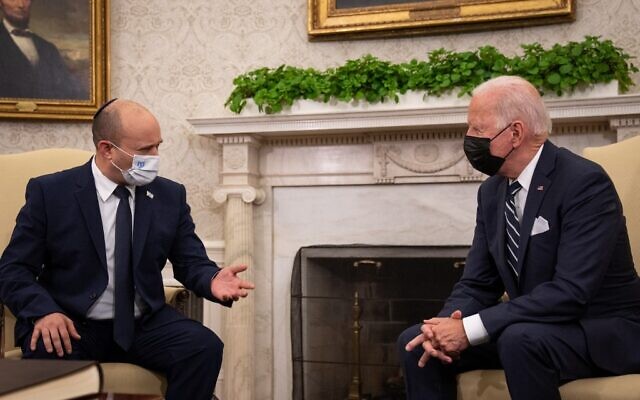 US President Joe Biden meets with Prime Minister Naftali Bennett in the Oval Office at the White House, on August 27, 2021, in Washington, DC. (Sarahbeth Maney-Pool/Getty Images/AFP)

An Israeli official said Friday that Bennett’s office notified the Biden administration ahead of time of its plans to reconvene the Defense Ministry body that authorizes settlement construction.

Channel 12 reported that Bennett and Defense Minister Benny Gantz tried to time the announcement well before Biden’s planned visit to Israel in over a month but after the holy Muslim month of Ramadan.

Israel captured East Jerusalem, the West Bank and Gaza in 1967 during the Six-Day War. Palestinians hope to establish an independent state on the territories.

While most of the projects slated to be advanced are for settlements located closer to the Green Line, other plans slated to be green-lit are for settlements located deep in the West Bank, east of the security barrier. This includes a project for 56 homes in Negohot, which will be advanced through the deposit stage, and a plan for 534 homes in Shevut Rachel and 114 homes in Ma’aleh Michmash that are expected to be advanced through the final planning stage.

In addition to adding thousands of new homes, the plans will retroactively legalize the Mitzpeh Dani and Oz V’gaon outposts. The former is a wildcat neighborhood of the Ma’aleh Michmash settlement in the heart of the West Bank and the latter is a nature reserve and education center that was built following the abduction and murder of Israeli teens Gilad Shaer, Eyal Yifrach and Naftali Fraenkel in the summer of 2014.

Sorgente articolo:
Coalition would fall if settlement homes plan not okayed, officials said to tell US – The Times of Israel