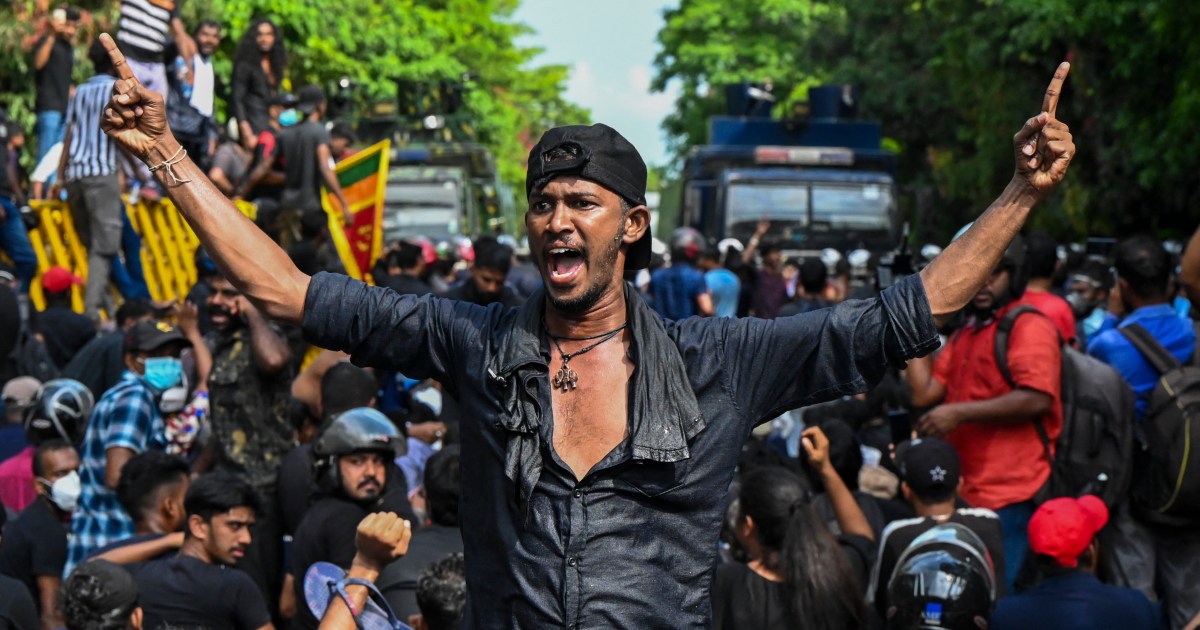 EU, US, Canada have questioned use of emergency powers, which allow deployment of troops to maintain law and order.

Foreign diplomats have urged Sri Lanka’s beleaguered president to repeal a state of emergency imposed after a general strike brought the country to a halt.

The government of President Gotabaya Rajapaksa declared a new state of emergency on Friday to “ensure public order” after weeks of protests demanding his government step down over mismanagement of the country’s economy.

Police fired tear gas and used water cannon earlier on Friday to disperse students attempting to storm the national parliament to demand that Rajapaksa resign amid a general strike that shut shops and halted public transport, bringing the nation of 22 million people to a standstill after weeks of unrest.

The European Union said on Saturday that declaring a state of emergency “could have a counter productive effect” and noted that a month of anti-government protests had so far been peaceful.

US ambassador to Sri Lanka Julie Chung said that declaring a second state of emergency in as many months “won’t help”, and the country’s deepening economic crisis and political gridlock needed long-term solutions.

“The voices of peaceful citizens need to be heard,” Chung said.

“And the very real challenges Sri Lankans are facing require long term solutions to set the country back on a path toward prosperity and opportunity for all,” she added.

Canadian envoy David McKinnon said Sri Lankans had a right to peaceful protest under a democracy and that it was “hard to understand why it is necessary, then, to declare a state of emergency”.

The rights group Amnesty International said protests have been peaceful and the authorities have unlawfully restricted the right to freedom of peaceful assembly.

The government said on Saturday the emergency legislation was declared to create political stability and that placing the country in a state of emergency would help create necessary conditions for the government to negotiate with the International Monetary Fund and other agencies for financial assistance and debt restructuring.

“The emotive protests organised in the capital and many parts of the country have become a threat to public safety,” the government said in the statement, adding that continued protests will only aggravate the economic difficulties.

Beleaguered Rajapaksa had declared an earlier state of emergency on April 1, a day after thousands of protesters attempted to storm his private home in the capital. That emergency was allowed to lapse on April 14.

But protests have since escalated, spurring Sri Lanka’s worst crisis since independence in 1948.

Rajapaksa has insisted he will not step down despite the escalating demonstrations.

The new state of emergency announced on Friday came as thousands of demonstrators remained outside Rajapaksa’s seafront office, where they have been protesting since April 9, and smaller groups have tried to storm the homes of other key government politicians.

The demonstrators blame Rajapaksa and his ruling family for mismanaging the economy as months of blackouts and acute shortages of food, fuel, and pharmaceuticals have caused widespread suffering across the island. Shortages of hard currency have also hindered imports of raw materials for manufacturing and worsened inflation, which surged to 18.7 percent in March.

As oil prices soar due to the Russia-Ukraine conflict, Sri Lanka’s fuel stocks are running out. Authorities have announced countrywide power cuts extending up to 7 1/2 hours a day because they are unable to supply enough fuel to power generating stations.

Millions of workers stayed off work on Friday in the strike, organised by the country’s trade union movement. Train and state-owned bus services were disrupted. Industrial workers demonstrated outside their factories and black flags were hung across the country in an expression of anger against the government.

“We can pinpoint the policy blunders of the president that led to this very sorry state of our economy,” trade union leader Ravi Kumudesh said.

Last month, Sri Lanka announced it was defaulting on its $51bn foreign debt, and finance minister Ali Sabry warned this week that the country will have to endure its unprecedented economic hardships for at least two more years.

Hospitals are short of vital medicines and the government has appealed to citizens abroad for donations.