Two Palestinians accused of carrying out a deadly terror attack in Elad last week were arrested Sunday by Israeli forces in a forested area near the central city, security officials said.

“A joint team spotted the two suspicious figures near a quarry,” the statement said.

Footage from the scene — about one kilometer, less than a mile, from where the attack took place — showed security forces shouting at the men in a forested area, then arresting them. In another video, al-Rifa’i is seen admitting to security forces that he committed the attack with Abu Shqeir.

“What did you do here?” an officer asks al-Rifa’i. “An attack… an attack in Elad,” al-Rifa’i responded. The officer then asked him what he did in the attack. “[We] hit people… [me and] my friend, Subhi,” al-Rifa’i said.

An axe apparently used in the attack was located nearby.

The two — from a town near Jenin in the West Bank — are accused of hacking three Israelis to death with an axe in Elad, a majority ultra-Orthodox city in central Israel on Thursday. A knife was also believed to have been used in the attack.

Police launched a massive manhunt for them, which ended with their arrest nearby some 60 hours after the attack.

Speaking from the scene, Israel Police commissioner Kobi Shabtai hailed the arrests. “The hunt for the terrorists is over. The intense activity immediately after the incident and the flooding of the area with hundreds of policemen and soldiers, along with the means we used, forced them to hide in the area and led us to find them,” Shabtai said. 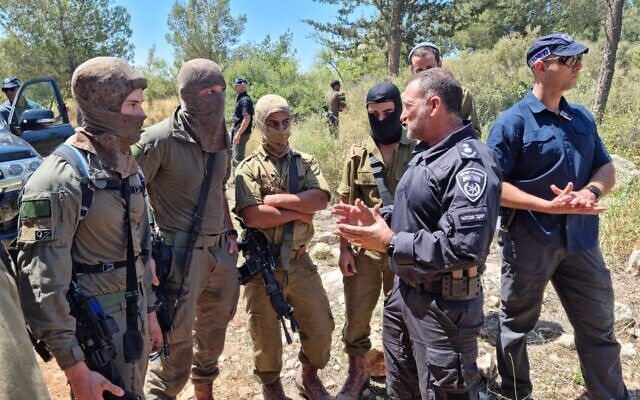 Police commissioner Kobi Shabtai speaks to officers near the central city of Elad on May 8, 2022, shortly after two Palestinian terror suspects were arrested. (Israel Police)

“We will continue to work to stop terrorism and strengthen the security and sense of security of the citizens of the State of Israel,” said IDF chief Aviv Kohavi.

“We are at the beginning of a new stage in the war on terror… You cannot throw a match and escape,” the premier said at the start of the weekly cabinet meeting. “The Israeli government’s top mission is to restore personal security to Israeli citizens.”

“We will continue to determinedly pursue those who wish evil upon us — all the time and everywhere,” he said. 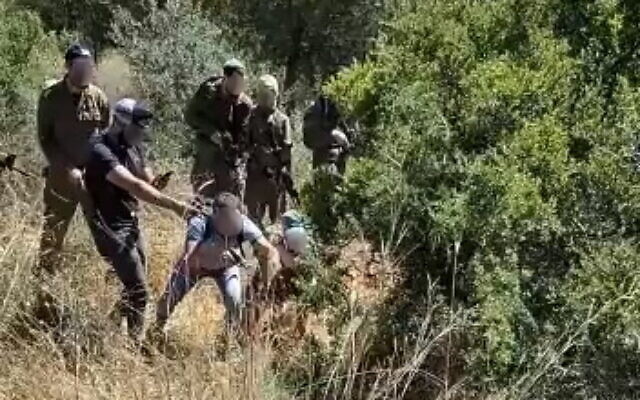 Security forces detain two Palestinians, allegedly behind a deadly terror attack, near the central city of Elad on May 8, 2022. (Screenshot: Twitter)

Defense Minister Benny Gantz praised the arrests of the “despicable” suspects and said security forces would track down anyone who had assisted the assailants. “I thank the security forces who worked around the clock,” he said.

Palestinian terror groups vowed that the arrests of the two Palestinian suspects would not prevent further violence against Israel.

No group has stepped forward to claim responsibility for the attack, which left three Israelis dead and three others seriously wounded.

“Our Palestinian people and their heroic youth will not stand idly by in the face of the occupation’s crimes and its violations against our Jerusalem holy sites and the blessed Al-Aqsa Mosque,” the Hamas terror group said in a statement.

Palestinian Islamic Jihad praised the “heroes” who killed three Israelis in the “settlement of Elad.” Elad lies in internationally recognized Israel, not the West Bank.

“They showed the frailness of this monstrous entity and the weakness of its security apparatus,” said Tariq Izz al-Din, an Islamic Jihad spokesperson.

Tensions have risen sharply between Israel and the Palestinians in recent months against the backdrop of a spate of terror attacks in Israel and the West Bank that have left 19 people dead.

The Israeli army stepped up its West Bank activities in an attempt to crack down on the spiraling violence. The ensuing raids sparked clashes that left at least 27 Palestinians dead since mid-March. Many of those took part in the clashes, while others appeared to have been civilians.