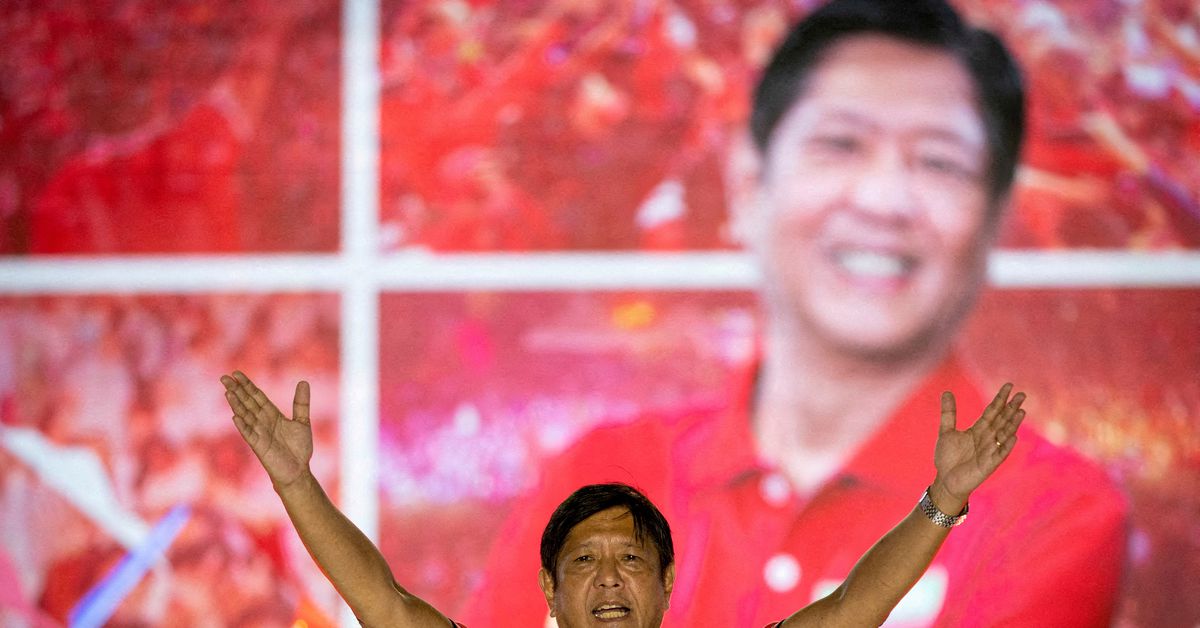 MANILA, May 9 (Reuters) – The Philippines votes on Monday in its most divisive presidential election in decades, with the prospect of a once unthinkable return to rule of the Marcos family, 36 years after they were toppled in a “people power” uprising.

The election pits Vice President Leni Robredo against former senator and congressman Ferdinand Marcos Jr, the son and namesake of a dictator whose 20-year rule ended in a public revolt and his family’s humiliating retreat into exile.

Opinion polls put Marcos, popularly known as “Bongbong”, leading his rival by over 30 percentage points, having topped every poll this year. That means Robredo will need a late surge or low turnout if she is to win the presidency.

Marcos, 64, has presented no real policy platform but his presidency is expected to provide continuity from outgoing leader Rodrigo Duterte, whose ruthless, strongman approach proved popular and helped him to consolidate power rapidly.

Marcos is buoyed by a cult-like following of younger Filipinos born after the 1986 revolution, having launched a massive social media offensive in an upbeat campaign that has carried undertones of historical revisionism. read more

His supporters and social media influencers have dismissed narratives of plunder, cronyism and brutality under the martial law of his late father as lies peddled by opponents, presenting what his critics say is a different version of history. The Marcos camp has denied running misinformation campaigns.

Despite its fall from grace, the Marcos family returned from exile in the 1990s and has since been a powerful force in Philippine politics, retaining its influence with vast wealth and far-reaching connections.

The vote also presents an opportunity for Marcos to avenge his acrimonious loss to Robredo in the 2016 vice presidential election, a narrow defeat by just 200,000 votes that he sought unsuccessfully to overturn.

Mass rallies took place across the capital Manila on Saturday in a festival-like finale to the campaigns. read more

Marcos has steered clear of debates and has campaigned on a message of optimism and unity, on Saturday telling hundreds of thousands of supporters that he dreamed of a “victory of unity of the entire Philippines”.

“It’s our right to have a future with dignity and it’s our job to fight for it,” she said, to chants of “Leni, Leni”.

A game-changer in the election could be vice presidential running mate Sara Duterte-Carpio, the incumbent president’s popular daughter, who could transfer some of her father’s huge support to Marcos. The president has not endorsed any candidate.

About 65 million Filipinos are eligible to vote to decide on a successor to Duterte after his six years in power.

Also up for grabs are about 18,000 posts, from seats in the senate and congress to mayors, governors and councillors. read more

In a commentary, author and political analyst Richard Heydarian said the stakes are higher than any other election in recent years, with Marcos likely to overhaul the constitution to entrench his power if he wins, and Robredo in a position to prevent a “Marcosian hegemony”. read more

“Make no mistake: This is the most consequential elections in contemporary Philippine history,” he wrote in the Philippine Daily Inquirer.