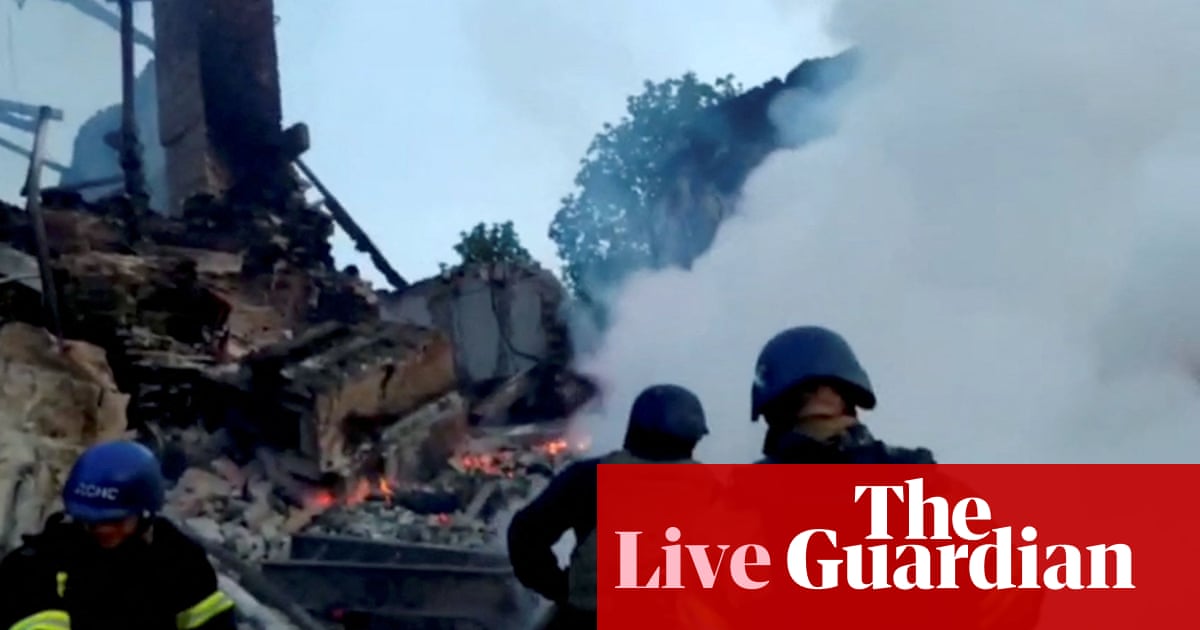 My colleague Daniel Boffey, who is in Kyiv, has been in touch this morning, and has supplied me with the text of Volodymr Zelenskiy’s 8 May address this morning entitled “Address by the President of Ukraine on the Day of Remembrance and Reconciliation”.

Every year on May 8, together with the entire civilized world, we honor everyone who defended the planet from Nazism during World War II. Millions of lost lives, crippled destinies, tortured souls and millions of reasons to say to evil: never again!

We knew the price our ancestors paid for this wisdom. We knew how important it is to preserve it and pass it on to posterity. But we had no idea that our generation would witness the desecration of the words, which, as it turned out, are not the truth for everyone.

On February 24, the word “never” was erased. Shot and bombed. By hundreds of missiles at 4am, which woke up the entire Ukraine. We heard terrible explosions. We heard: again!

The city of Borodyanka is one of the many victims of this crime! Behind me is one of many witnesses! Not a military facility, not a secret base, but a simple nine-storey building. Can it pose a security threat to Russia, to 1/8 of the land, the world’s second army, a nuclear state? Can anything be more absurd than this question? It can.

250kg high explosive bombs, with which the superpower shelled this small town. And it went numb. It cannot say today: never again! It cannot say anything today. But here everything is clear without words.

Just look at this house. There used to be walls here. They once had photos on them. And in the photos there were those who once went through the hell of war. Fifty men who were sent to Germany for forced labor. Those who were burned alive when the Nazis burned more than 100 houses here.

250 soldiers who died on the fronts of World War II, and a total of almost 1,000 residents of Borodyanka who fought and defeated Nazism. To ensure: never again. They fought for the future of children, for the life that was here until February 24.

Imagine people going to bed in each of these apartments. They wish good night to each other. Turn off the light. Hug their loved ones. Close their eyes. They dream of something. There is complete silence. They all fall asleep, not knowing that not everyone will wake up. They sleep soundly. They have a dream of something pleasant. But in a few hours they will be awakened by missile explosions. And someone will never wake up again. Never again.

The word “never” was dropped from this slogan. Amputated during the so-called special operation. They stabbed a knife in the heart and, looking into the eyes, said: “It’s not us!” Tortured with the words “not everything is so unambiguous.” Killed “Never again”, saying: “We can repeat.”

And so it happened. And the monsters began to repeat. And our cities, which survived such a heinous occupation that 80 years are not enough to forget about it, saw the occupier again. And got the second date of occupation in their history. And some cities, such as Mariupol, got the third. During the two years of occupation, the Nazis killed 10,000 civilians there. In two months of occupation, Russia killed 20,000.

Decades after World War II, darkness returned to Ukraine. And it became black and white again. Again! Evil has returned. Again! In a different uniform, under different slogans, but for the same purpose. A bloody reconstruction of Nazism was organized in Ukraine. A fanatical repetition of this regime. Its ideas, actions, words and symbols. Maniacal detailed reproduction of its atrocities and “alibi”, which allegedly give an evil sacred purpose. Repetition of its crimes and even attempts to surpass the “teacher” and move him from the pedestal of the greatest evil in human history. Set a new world record for xenophobia, hatred, racism and the number of victims they can cause.

Never again! It was an ode of a wise man! Anthem of the civilized world! But someone sang out of tune. Distorted “Never again” with notes of doubt. Silenced, beginning his deadly aria of evil. And this is clear to all countries that have seen the horrors of Nazism with their own eyes. And today they are experiencing a terrible deja vu. See it again!

All nations who have been branded “third-class”, slaves without the right to their own state or to exist at all hear statements that exalt one nation and erase others with ease. They claim that you don’t really exist, you are artificially created, and therefore you have no rights. Everyone hears the language of evil. Again!

And together they acknowledge the painful truth: we have not withstood even a century. Our Never again was enough for 77 years. We missed the evil. It was reborn. Again and now!

This is understood by all countries and nations who support Ukraine today. And despite the new mask of the beast, they recognized him. Because, unlike some, they remember what our ancestors fought for and against. They did not confuse the first with the second, did not change their places, did not forget.

The Poles didn’t forget, on whose land the Nazis began their march and fired the first shot of World War II. Didn’t forget how evil first accuses you, provokes you, calls you an aggressor, and then attacks at 4.45am saying it’s self-defense. And they saw how it repeated on our land. They remember the Nazi-destroyed Warsaw. And they see what was done to Mariupol.

The British people did not forget how the Nazis wiped out Coventry, which was bombed 41 times. How the “Moonlight Sonata” from the Luftwaffe sounded, when the city was continuously bombed for 11 hours. How its historic center, factories, St. Michael’s Cathedral were destroyed. And they saw missiles hit Kharkiv. How its historic center, factories and the Assumption Cathedral were damaged. They remember London being bombed for 57 nights in a row. Remember how V-2 hit Belfast, Portsmouth, Liverpool. And they see cruise missiles hit Mykolaiv, Kramatorsk, Chernihiv. They remember how Birmingham was bombed. And they see its sister city Zaporizhzhia being damaged.

The Dutch remember this. How Rotterdam became the first city to be completely destroyed when the Nazis dropped 97 tons of bombs on it.

The French remember this. Remember Oradour-sur-Glane, where the SS burned half a thousand women and children alive. Mass hangings in Tulle, the massacre in the village of Ascq. Thousands of people at a resistance rally in occupied Lille. They saw what was done in Bucha, Irpin, Borodyanka, Volnovakha and Trostyanets. They see the occupation of Kherson, Melitopol, Berdyansk and other cities where people do not give up. And thousands of them go to peaceful rallies, which are beyond the power of the occupiers, and all they can do is shoot at civilians.

The Czechs have not forgotten this. How in less than a day, the Nazis destroyed Lidice, leaving only ashes from the village. They saw Popasna destroyed. There are not even ashes left from it. The Greeks, who survived massacres and executions throughout the territory, the blockade and the Great Famine, have not forgotten.

This is remembered by Americans who fought evil on two fronts. Who passed Pearl Harbor and Dunkirk with the Allies. And together we are going through new, no less difficult battles.

This is remembered by all Holocaust survivors – how one nation can hate another.

Lithuanians, Latvians, Estonians, Danes, Georgians, Armenians, Belgians, Norwegians and many others have not forgotten this – all those who suffered from Nazism on their land and all those who defeated it in the anti-Hitler coalition.

Unfortunately, there are those who, having survived all these crimes, having lost millions of people who fought for victory and gained it, have desecrated the memory of them and their feat today.

The one who allowed the shelling of the cities of Ukraine from his land. The cities that, along with our ancestors, were liberated by his ancestors.

The one who spat in the face of his “Immortal Regiment”, placing torturers from Bucha next to it.

And challenged all mankind. But forgot the main thing: any evil always ends the same – it ends.

Today, on the Day of Remembrance and Reconciliation, we pay homage to all those who defended their homeland and the world from Nazism. We note the feat of the Ukrainian people and their contribution to the victory of the anti-Hitler coalition.

Explosions, shots, trenches, wounds, famine, bombing, blockades, mass executions, punitive operations, occupation, concentration camps, gas chambers, yellow stars, ghettos, Babyn Yar, Khatyn, captivity, forced labor. They died so that each of us knows what these words mean from books, not from our own experience. But it happened differently. This is unfair to them all. But the truth will win. And we will overcome everything!

And the proof of this is called “Werewolf”. This is Hitler’s former headquarters and bunker near Vinnytsia. And all that is left of it is a few stones. Ruins. The ruins of a person who considered himself great and invincible. This is a guide for all of us and future generations. What our ancestors fought for. And proved that no evil can avoid responsibility. Will not be able to hide in the bunker. There will be no stone left of it. So we will overcome everything. And we know this for sure, because our military and all our people are descendants of those who overcame Nazism. So they will win again.

And there will be peace again. Finally again!

Eternal honor to all who fought against Nazism!

Eternal memory to all those killed during World War II!