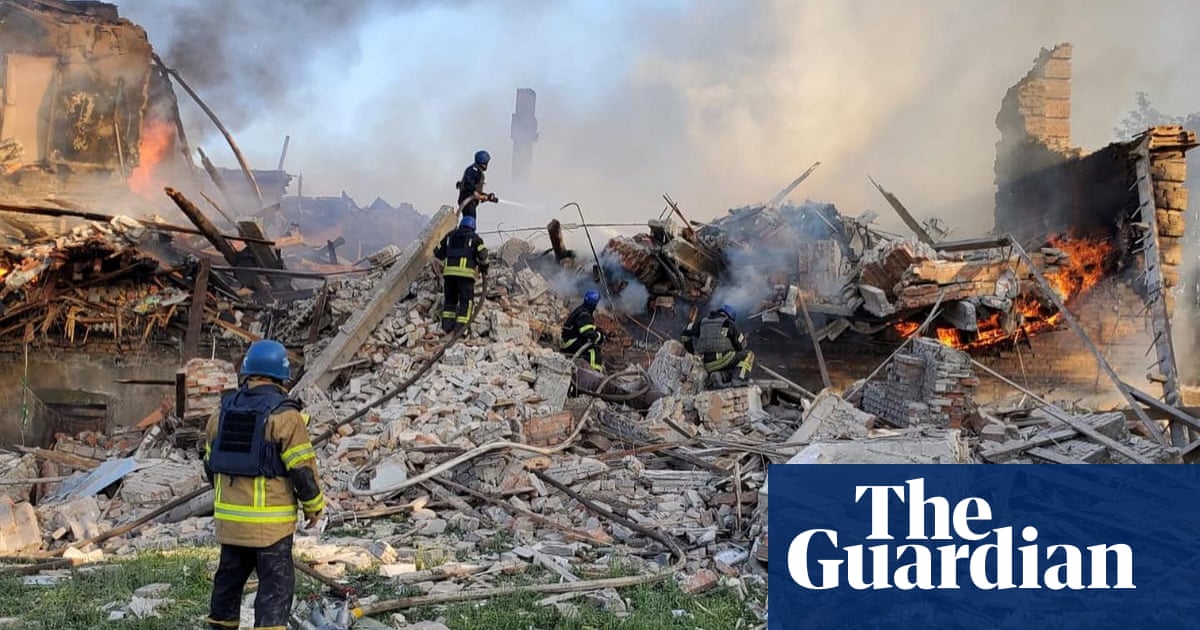 Sixty people are feared to have been killed after a village school in eastern Ukraine took a direct hit in a Russian air raid, with rescue attempts said by the regional governor to be impossible due to constant shelling.

Russian attacks in the east and south intensified at the weekend ahead of Monday’s symbolic Victory Day celebrations, with the Black Sea city of Odesa coming under repeated missile strikes and the remaining Ukrainian fighters in the Azovstal steelworks in the besieged port city of Mariupol staging a press conference on Sunday saying they had been “abandoned” by the government as Russian attacks continued

About 90 people had been using the school in Bilohorivka, a village 60 miles (97km) north-west of the Russian-controlled city of Luhansk, as a shelter after the previous place of refuge, a clubhouse, had been destroyed in an earlier attack.

Serhiy Gaidai, the Luhansk governor, told the Guardian he believed the 30 people who escaped had been outside in the grounds of the building. He said he had little hope for those who were under rubble.

“Unfortunately, they are probably dead,” he said. “Because the building collapsed. Besides, an air bomb is not a missile, its explosion produces extremely high temperatures. That’s why most likely people haven’t survived.”

Russia’s president, Vladimir Putin, has stated he intends to take the eastern Luhansk and Donetsk regions by 9 May when Russia marks Victory Day and the defeat of Nazi Germany in the second world war.

In an address to mark Ukraine’s 8 May remembrance and reconciliation day, Volodymyr Zelenskiy said his country paid homage to all those who helped defeat Adolf Hitler but accused Russia of repeating his crimes.

He said: “Every year on 8 May, together with the entire civilised world, we honour everyone who defended the planet from Nazism during world war two. Millions of lost lives, crippled destinies, tortured souls and millions of reasons to say to evil: never again!

“We knew the price our ancestors paid for this wisdom. We knew how important it is to preserve it and pass it on to posterity. But we had no idea that our generation would witness the desecration of the words, which, as it turned out, are not the truth for everyone.

Zelenskiy went on: “On 24 February, the word ‘never’ was erased. Shot and bombed. By hundreds of missiles at 4am, which woke up the entire Ukraine. We heard terrible explosions. We heard: again!”

Illya Samoilenko, a lieutenant in the Azov regiment in Mariupol, said his fellow soldiers would be executed if captured by the Russians and that surrender would be a “gift” to the enemy. “We are witnesses of Russian crimes,” he said. “Surrender is not an option because Russia is not interested in our lives.”

Gaidai said the attack on the school in Bilohorivka had taken place at 6pm on Saturday night and had been followed by a constant barrage in the surrounding area that had made rescue attempts impossible.

He said a bus had been sent to the village, which has a population of 800 to 900 people, to evacuate the remaining residents on Sunday morning but it had to turn round due to the ferocity of the shelling on the roads.

Gaidai said: “Right now they are asking us, begging us to get them out, but we can’t because everything is now under shelling. Around 70 people wanted to be evacuated today. We sent a bus, but it turned around and went back. Not just the village, but also a highway is under shelling.”

Gaidai said he had been frustrated in recent weeks that the residents had repeatedly refused to leave despite the growing dangers to their lives as Russia has focused its attacks in the east and south of Ukraine.

Earlier on Saturday, eight miles (13km) north of the school, two children died and a further two children and an elderly woman were injured when a missile hit the village of Pryvole, Gaidai said.

He said: “Around a week ago we tried to evacuate around 300 people from Bilohorivka. We’d already settled this, and sent a few buses. But most of them refused to go. So we managed to evacuate only 60-70 people.”

Ukraine’s prosecutor general said that as of 8 May, 225 Ukrainian children had died since Russian launched its invasion on 24 February.